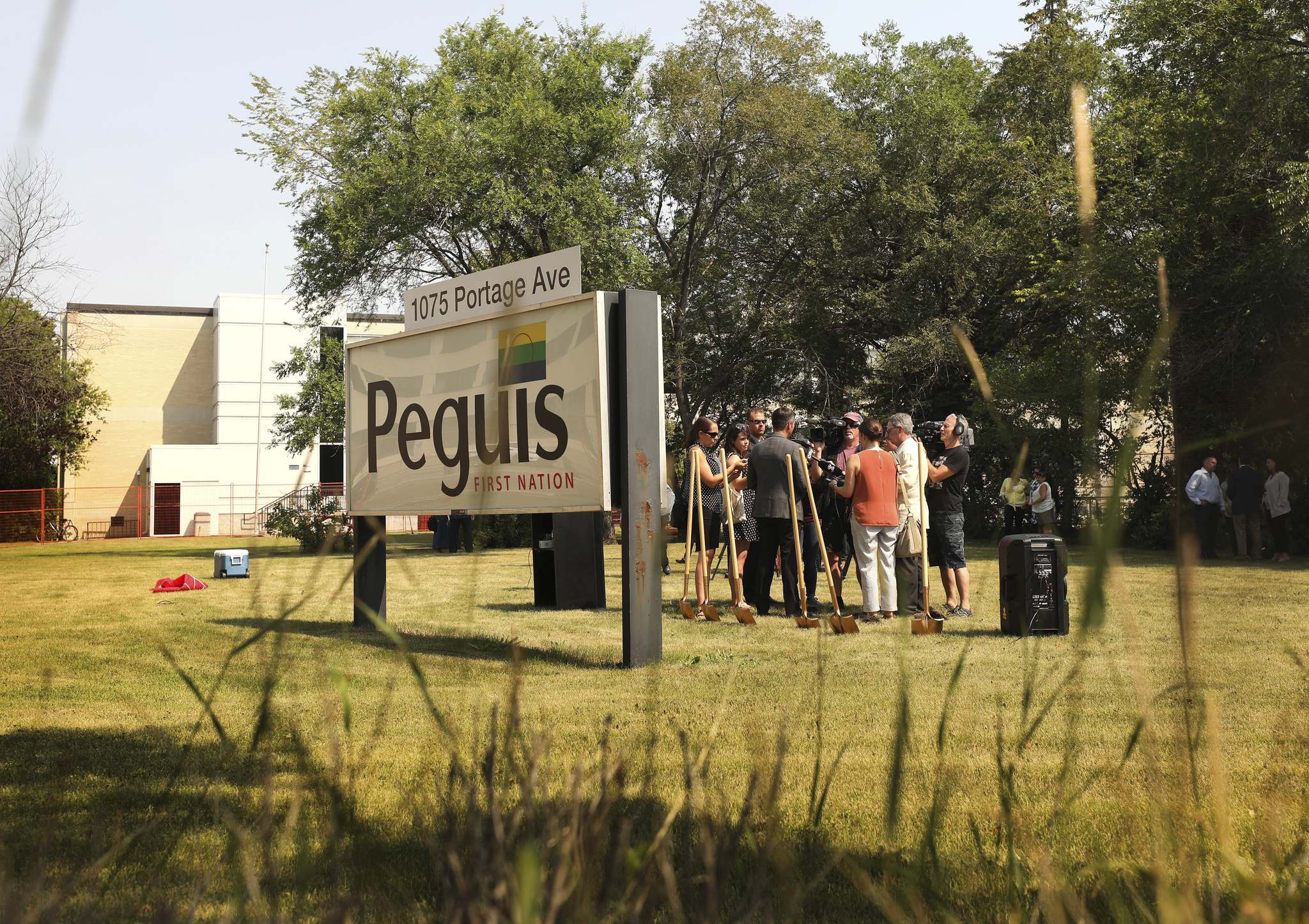 The ceremony marked the start of construction for the first phase of the project, which will become Peguis First Nation’s first urban reserve and the second of its kind in Winnipeg.

“Where we are today, it has been a long time coming,” Peguis Chief Glenn Hudson told the small crowd gathered on the lawn at 1075 Portage Ave. “We are looking at repatriating our lands, but we’re doing it with the mindset, as with the treaty, to work in peace and harmony together, to work together with our partners.”

Mayor Brian Bowman described the morning’s event “as a historic day for the City of Winnipeg and, of course, our partners with Peguis.”

City council unanimously approved an administrative proposal at its July 19 meeting for a master services agreement with Peguis on converting the property — at the corner of Portage Avenue and Dominion Street, across from RCMP Division D headquarters — into an urban reserve.

It will be the second urban reserve in Winnipeg: Long Plain First Nation operates a gas station and convenience store at 480 Madison St.

The first phase of the new development, valued at $6.5 million, will be the construction of a two-storey, 14,125-sq.-ft. complex that will house a pain-management clinic, pharmacy, restaurant and retail recreational cannabis outlet.

Alan Park, chief executive officer of the Chief Peguis Investment Corporation, said further development on the site will include the construction of two 48-unit apartment towers, and a business tower that will replace the existing commercial building on the property.

Hudson said the master services agreement with the city, which ensures the provision for essential civic services, was the final step in the process to have the property converted into an urban reserve, which he said will become official in a matter of days.

A contentious part of the agreement will result in Peguis paying an annual fee to city hall, instead of property taxes, for city services — but the amount is only 80 per cent of its current property tax bill.

A property-tax discount was not part of the urban reserve arrangement with Long Plain.

Bowman has defended the move, citing a precedent set by the City of Brandon, which accepted a 25 per cent discount when Gambler First Nation converted land in that community into an urban reserve.

Under existing legislation, the province would make up the difference to city hall with a lump-sum payment equivalent to five years of lost property-tax revenue. The agreement between city hall and Peguis is for five years, after which both sides would negotiate new payment terms.

Peguis bought the Portage Avenue property in 2014. It also has interest in Assiniboia Downs race track and land adjacent to it in the Rural Municipality of Headingley, as well as a share of the former Kapyong Barracks property in south Winnipeg.

Hudson said engineering planning is continuing for a massive project at Assiniboia Downs, which he previously said would include a hotel and conference centre, water park and gaming centre — all of which could be converted into an urban reserve at some point.