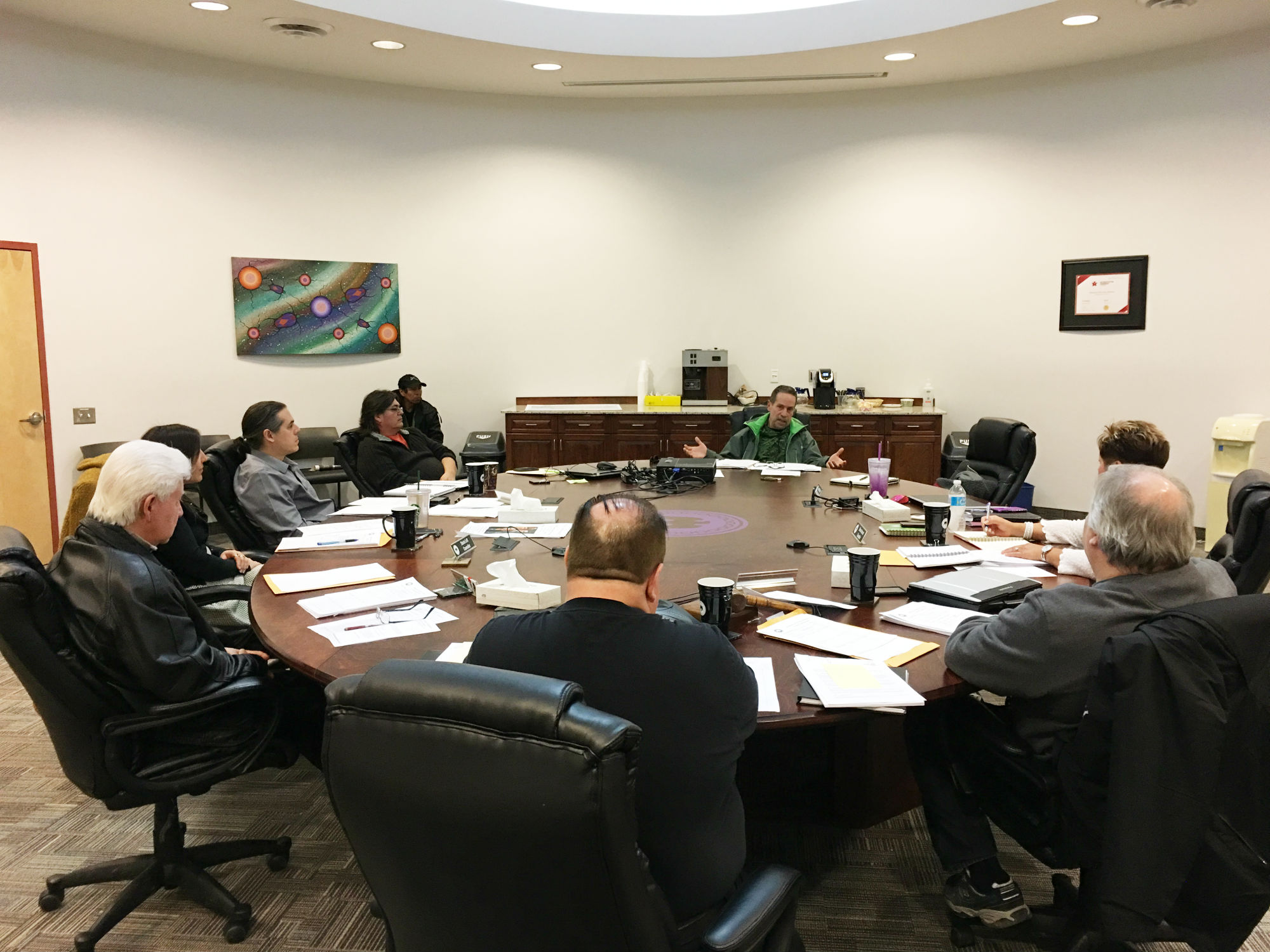 TYENDINAGA – It is no secret that the cannabis industry is booming in Tyendinaga Mohawk Territory. There are now eight different medical dispensaries on the territory, and it seems like more are opening every week. On the morning of Monday, February 20th, 2017, the Elected Band Council of Tyendinaga Mohawk Territory received a presentation from local businessman and cannabis proponent Tim Barnhart. Barnhart is the owner of Legacy 420, a store he opened two years ago as the first cannabis dispensary in an Indigenous community in Canada.

Armed with a thick brief of reports and studies spread out on the table before him, Barnhart promoted the medical applications of cannabis, and drove home the economic opportunities the industry could bring to Tyendinaga. Barnhart said that he has not only been working on the dispensary model but on “commercial applications to grow not only within [Tyendinaga] but with other First Nations across Canada.” Barnhart referenced the creation of the Indigenous Medical Cannabis Association as a means to build and regulate an Indigenous cannabis industry across Turtle Island.

According to Barnhart’s presentation, “the goal of the IMCA is to look after our own industry, to liaise with government officials, and to look after our own cannabis program as opposed to giving it up like we did the tobacco and gambling industries. We gave away a lucrative part of our economies.”

Barnhart envisions large scale cannabis agriculture taking place on native reserves, and lauds the labour intensive aspects of the industry. “It’s value added, it’s environmentally friendly, it’s harmless in that no one has ever died from it – unlike the tobacco, or alcohol, or gambling industries. I see it as a way forward for our people and have for quite a period of time. And I would like to move it forward with the backing of my own people. So that is why I am here today to ease any fears you might have… and to answer any questions you might have with regards to dispensing, growing, and moving cannabis across Canada.”

Elected Council Chief R. Donald Maracle was quick to clarify that First Nations Band Councils did not “give away” tobacco or gambling revenues. Rather, Maracle argued, “the federal government amended the criminal code to give the province the authority without consultation with First Nations.” Maracle added that this issue is “part of the ongoing discussions with the Chiefs of Ontario leadership since that time” and that a meeting was being held with the Ministry of finance in early March to address the issue further.

Maracle responded to Barnhart’s presentation by stressing that “the cannabis file is still in a state of development,” and noted that the Elected Council is “still gathering information about how First Nations will be consulted” on the regulation of medical cannabis. But Maracle did indicate that the Council has been following the industry with interest, and that “there has been discussion but no decision” about Council itself becoming involved in the industry.

Maracle also indicated that the Chiefs of Ontario have also requested to be consulted around the cannabis issue, but that that has not happened yet.

Expressing support for the medicinal benefits of the plant, Maracle noted that “we are aware that under the control of a physician, that cannabis is beneficial for certain kinds of pain management so we don’t have issue with the medical aspect of it, but when it becomes something more than that, then we become concerned.”

The Band Council is still in the process of getting information from the Provincial and Federal Crowns about what the new medical cannabis regime is going to look like in Canada. Like many other parts of the Canadian government, they are unsure as to how to proceed given the legal limbo concerning medical cannabis.

When asked if he saw there as being any role for the Chief and Elected Council in this process, Barnhart replied “Absolutely there is. [You should be] advocating for us. I’ve been in this business for 35 years. I’ve been growing commercially for the last 10 years. I’ve got 24 direct employees and another 25 indirect employees, and I’d say that’s pretty damn good for [the] two years in this business [that Legacy 420 has been open]. Second, is the financial aspect of this. Everybody at my store starts at $15 an hour. I’ve got people in the management running this who are making $70,000 to $80,000 a year. So it’s value added every step of the way.”

Chief Maracle agreed that the economic spin-offs from the industry were significant, but stressed the importance of correct regulation and standards. “I see Tim that you have a real good opportunity and a good business to supply the medical marijuana, but there has to be strict standards in the operation to make sure that there’s nothing else” Chief Maracle stated. Barnhart replied: “I agree. We’re working on that for policy and procedure. I’ve got opportunities to open dispensaries on 20 other First Nations…. This is going to take off, and when it does it’s going to take off fast. And so I want to be prepared for that as well.”

Maracle came to the defence of the budding industry as regarding taxation on reserve. He noted that the Canadian government was looking to “raise taxes to pay down the deficit, so I’m sure they have their eyes on [cannabis] revenue for tax purposes. We will take the view that it’s tax-exempt if it’s on reserve.”

The Chief then asked Barnhart if he would be willing to collect tax on reserve for cannabis sales. Barnhart replied that “I would be prepared to pay back to my community in any way, shape, or form. But I would not be prepared to pay tax [to Canada]. I have no problem with donating as much money as you guys need to feed and clothe our people, but in terms of giving the tax to the province, no, I wouldn’t be for that.”

Real People’s Media asked Chief Maracle if he had received any complaints from members in the community about the dispensaries that have opened thus far. Maracle replied that there were no complaints that he was aware of. “People are asking what it is. That’s pretty much the extent of it. Of course there will be some people that are against any form of drug use on religious grounds and some to see the medical benefit of cannabis in a regulated environment. I would say that there really hasn’t been a lot of community discussion about it.”

The Band Council seemed to largely agree with Barnhart concerning the medical significance of cannabis and the potential economic benefits of the industry. As Chief Maracle put it, “If a medical professional says this is good for treatment then we are not in a position to say that the medical professional is wrong.” Maracle added, “In a regulated environment for medical purposes then I think we can live with it. Personally myself, I think a clear mind is a better mind, so that’s not depending on any kind of drug or alcohol or cigarettes. That really is our culture, but there is a business opportunity here, and if it’s regulated and controlled and in a regulated environment then I think it’s OK.”

One area of concern for the council concerned the establishment of new shops popping up around Tyendinaga, and how to determine the health and safety of their products and facilities. Barnhart rejoined, stating that “that’s exactly why we need to get the cannabis association up and running.” But ultimately Barnhart believes that “business will take care of business….
“If they’ve got a bad product, people will realize that real quick, and no longer shop there.”

The meeting ended with the elected Chief and Council thanking Barnhart for coming to speak with them. Chief Maracle concluded by telling Barnhart that “in a regulated environment, we can support what you do” and encouraged him to take part in upcoming processes of consultation with the Canadian government concerning the regulation and control of cannabis.