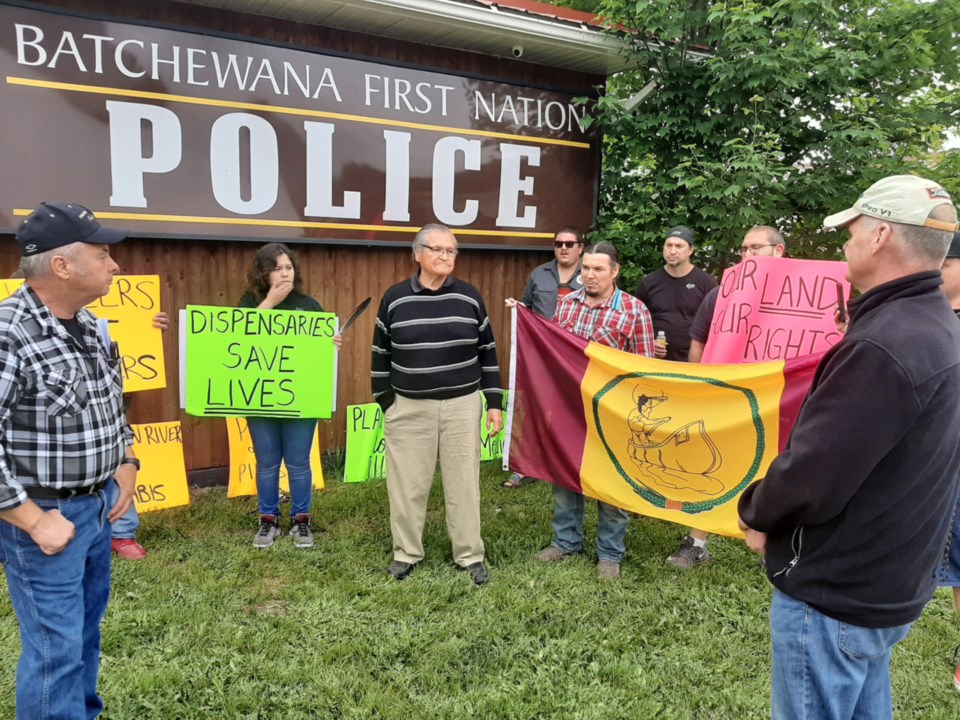 Although Del Riley is lending his roughly four decades of experience in Indigenous politics and treaty rights to cannabis dispensary owners in First Nations across northern Ontario, he’s reluctant to attach himself to the ever-growing industry.

The former chief of the National Indian Brotherhood – now known as the Assembly of First Nations – authored sections 25 and 35 of Canada’s Constitution Act, and is using his vast political expertise to assist cannabis dispensary owners in Batchewana First Nation and Garden River First Nation, as they remain at an impasse with their respective leaderships over the on-reserve cannabis industry.

“I’m an individual that they brought in to give them a hand on the overall economy of things, and to have a look at what’s currently wrong with the system in place as to why they can’t really develop an overall economy within First Nations communities,” said Riley, speaking to SooToday while travelling back home to Chippewas of the Thames First Nation Tuesday. “I have no hand in any cannabis industry at all. I’m a smoking gun.”

When Riley does visit and consult with First Nation dispensary owners, he issues them ‘constitutional certificates,’ indicating that cannabis dispensaries are protected under Section 25 and Section 35 of the Constitution Act, which he says upholds the right to participate in the cannabis industry through the government’s own recognition and affirmation of existing aboriginal and treaty rights.

“They really came about as a result of the imposition of provincial and federal positions – again, they’ve never talked to First Nations about the economy. All they do is come in and enforce their laws that they impose,” said Riley about the certificates. “Because of course, it represents the Constitution of Canada, and it encompasses their traditional way of doing business.”

“It’s perfectly legal, and it is a defence that essentially they’re put on notice it’s going to be a constitutional defence – because we have nothing else to go on.”

‘You can’t push an authority that you don’t have’

When asked about Batchewana and Garden River leadership threatening legal consequences against owners of cannabis dispensaries in those communities, Riley acknowledges that it won’t be an easy legal battle if dispensary owners go to court on trafficking charges – especially in Canada.

But then again, Riley says that nearly 300 cases have been won in court using Section 35 alone, and in the end, the two sections of the constitution that he authored are essentially the only lines of defence cannabis dispensary owners have to work with.

“Their treaty rights are intact in their whole treaty area. How do you resolve those things? We don’t have much luck going to court, because we face the all-white jury system of Canada’s laws,” he said.

Riley says, on the other hand, chiefs and councils operating under the Indian Act don’t have any authority to make laws and policies surrounding the cannabis industry, let alone enforce them.

“They’re the ones that are probably facing the legal consequences because if you go to court, they’re simply going to find out they really don’t have any authority,” he said. “It’s kind of like the blind leading the blind. You can’t push an authority that you don’t have. So they’ve got to figure all of this out.”

Riley says that in the case of dispensaries in Garden River and Batchewana, leadership is not talking to the people involved.

“I hope the administrations up there don’t see me as somebody that’s trying to bring them any harm. All I’m doing is presenting them with the actual facts, and that’s the only way they’re going to begin to resolve the issues surrounding the problems,” he said.

According to Riley, the issues in Garden and Batchewana echo a much larger, inherently racist problem. There’s no economy on reserves, he says, because Canada has confined Indigenous peoples to “concentration camps called reserves” with “no hope, no future” because the Indian Act doesn’t allow for economic development.

“If the First Nations can develop an economy, the whole country is going to benefit from it because they have to buy a lot of goods and services,” Riley said. “They’re going to have to fit into a lot of jobs and workforce, [which] they can’t currently do under this racist atmosphere that they have to face within both governments – both federal and provincial – and even to complicate that, First Nations people do not have any representation in either government.”

The catalyst for Riley’s ongoing battle against Canada’s racist policies aimed at Indigenous peoples is his own lived experiences at residential school in Brantford, Ont. during the early 1950s, where he was routinely beaten, left without winter clothes and digging through garbage for food – all the while suffering from tuberculosis before a treatment was even developed.

“I served five years in residential school – the most horrific place anyone could possibly imagine,” he said. “I was lucky to get out alive.”

Over the course of his political career, Riley has worked on more than 400 land claims.

“At the time I was at the union, I was already developing all the positions needed for the protection of Aboriginal treaty rights. This was my whole plan all along,” he said.

National conversation on First Nations governance could be sparked by cannabis

Riley says that cannabis dispensaries in First Nations can ultimately lead to a much-needed conversation nationally.

“I think if anything, this is just a start, but it’s probably going to take hold all over the country,” he said. “What’s really helping drive it, unfortunately, is this aversion to anything John A. MacDonald did, and that last slap in the face is the Indian Act our people have to live under.”

“Of course, part of it is the governance structure in there. It’s meaningless. So people are finding this out all over the place, and it helps answer the question of why there’s been no focus in First Nation communities – [chiefs and councils] don’t have the authority to do anything,” he continued. “That’s what’s really coming up, and it probably needs to happen, because this stuff, it’s got to be resolved – and I think it will all be resolved peacefully, and I’m hoping, fairly and justly.”