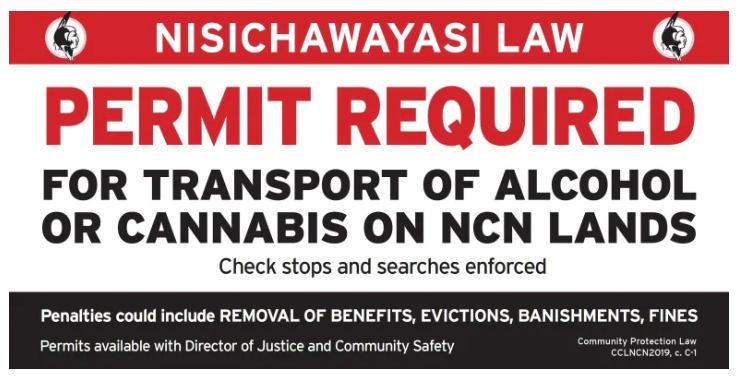 Anyone caught moving alcohol and cannabis without a permit within Nisichawayasihk Cree Nation could face penalities including fines or banishment, under a new community law that came into effect this week.

As of Oct. 1, all community members and visitors transporting alcohol and cannabis into or within the northern Manitoba community, which is also known as Nelson House, are required to carry a permit.

“We created our own community protection law to try to curtail what’s going on in our community,” said Chief Marcel Moody, citing violence, drug dealing and alcohol bootlegging.

The new regulations come seven months after an 18-year-old man was beaten to death at a house party in Nisichawayasihk Cree Nation, about 700 kilometres north of Winnipeg.

Four men from NCN were charged with first-degree murder in connection with Marcus Spence’s death.

Following Spence’s death, a temporary drug and alcohol ban was put into effect in the community, with a 24/7 checkstop at the only road in and out manned by band constable.

The ban was extended following a community meeting in March, but lifted in April.

It followed a similar temporary ban in 2018, following the deaths of three children in Nisichawayasihk, who were struck by a car driven by a man who was allegedly impaired.

Under NCN’s new community protection law, individuals transporting alcohol or cannabis will be required to buy a yearly permit for $60, which will be dropped to $30 if the person has not incurred any violations, Moody said. The money raised will help pay for the band constable program and a new justice director position.

People will need to show their permit to a peace officer if requested at the community’s checkstop, or during searches. Penalties for breaching the regulations could include removal of benefits, evictions, fines, or banishment from the community.

For now, violators will receive a warning until the permit system is fully in place, which Moody said should be within two months.

In an email, Manitoba RCMP said they are “engaged with NCN chief and council on this matter.”

Chief and council are also limiting the amount of alcohol and cannabis each permit holder is allowed to bring into the community on a daily basis to 30 grams of cannabis (the legal limit for personal possession in Manitoba), four bottles of wine, 26 ounces of hard alcohol or 24 beers. Moody said Westminster sherry, a fortified wine which retails for under $10 at Manitoba Liquor Marts, will not be allowed to be brought into the First Nation.

Those who have a prescription for cannabis use will not need to purchase a permit, but medical users may be asked to show evidence of a valid prescription by a peace officer.

The chief acknowledge the new regulations are “somewhat controversial,” but he maintains they’re necessary to combat violence.

“Sometimes you have to sacrifice your individual rights for the collective rights of our people,” Moody said.