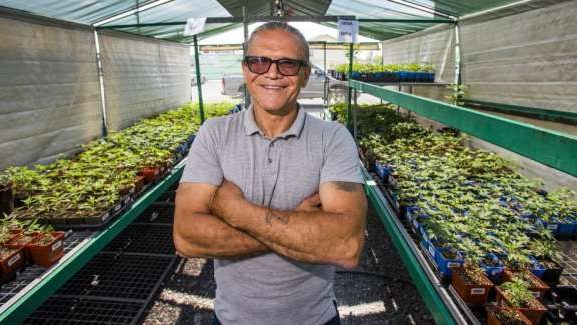 WEED WONDERLAND: What Mohawks can teach us about cannabis

Robert Tehonikonrathe, aka Fisher, was smiling.

It’s a million-dollar smile, the smile of a winner.

The gregarious Tehonikonrathe was recently asked: Are the Mohawks arch-capitalists?

“We’re the most capitalistic people in the world,” he told The Toronto Sun, laughing.

Right-leaning economists and Bay St. bigshots alike would quiver with joy if they spent 15 minutes in Mohawk Territory.

As for those who see Indigenous peoples as socialism personified, they would have a stroke at the raw stench of capitalism on display.

On a two-lane stretch of road on Hwy. 2, east of Belleville, the traffic is moving slowly.

It is a sunny, blue-sky bedazzled Wednesday with stunning clouds adding an artistic touch to the flood of commerce taking place below.

There are more than 60 cannabis dispensaries on the territory (some say 100) — toss in cheap cigarettes and cheap gas and that makes Tydeninaga a destination.

And a veritable ATM for its people.

The landscape is speckled with roadside signs offering specials and incentives. It is capitalism writ raw.

And, it is a territory, make no mistake. The Mohawks of the Bay of Quinte never signed on the dotted line with the Crown. So do not call it a reserve. Ever.

They are a sovereign people who have figured out the cannabis business better than an army of bureaucrats ever could.

“Those guys,” Tehonikonrathe said, “would just screw everything up here.”

And that’s a sentiment virtually every Canadian can get behind.

Tyendinaga has around 4,000 residents. It runs from the Bay of Quinte to Highway 401, at its heart is Shannonville.

I grew up in Belleville and in those years, while the tumbleweed blowing through the tiny town wasn’t literal, it was certainly figurative.

On a recent roll through the main drag, scores of cannabis dispensaries dot the landscape.

They have names like Best Buds, Pot Shoppe, B’Leaf, L’Eagle Dreams, Smoke on the Water, and Legacy 420.

Outside the stores — some bricks and mortar, others converted trailers or mobile homes — is an American shock attack of the silent salesman, aka roadside signs.

Outside the scores of dispensaries, everything from BMWs, vintage MGs to SUVs, pickup trucks and Toyota Camrys line the parking lots.

The clientele? Old, young, skinny, fat, white, Black, rich and not so rich.

And their reasons are myriad. Health and mental well-being to a fun escape on Friday night.

Some of the stores even offer drive-thrus, coffee, pizzas and 24/7 hour service.

On display at CannaKure, strains like Sour Patch Kids and Bruce Banner entice a wide array of customers on this Wednesday afternoon.

The Belleville native will roll your joint, chat with you, and steer you in the right direction to reefer gladness.

There are 20 people in the store.

“We get people here from all over on a regular basis — Oshawa, Ottawa and parts even further,” she smiled over a tray of reefer.

“This…,” she said of the cannabis biz, “has brought a lot of money into the community.”

While the sky overhead is shimmering blue, the legality of all this cannabis-created economic activity is definitely a slate gray.

The feds don’t really have any business in Tyendinaga. And they don’t like that very much.

“No one comes who doesn’t want to be here,” Jay Quelyn said.

At Deb’s Restaurant and gas station, the signs for SAGO cigarettes garnish the building’s exterior. Sago — one of the top-selling brands of Indigenous smokes — means “Greetings!”

Just down the road is the Pot Shoppe/ Health Shoppe/ Bear Medicine.

As a warm breeze blows in from the Bay of Quinte, Robert Tehonikonrathe is holding court. His son owns the dispensary that employs around 20 people.

One of the subjects is the trainwreck of the province’s cannabis legalization efforts.

The boutique bud emporiums in the city may warm the hearts of the Annex but they come with big supply problems and uncompetitive prices.

Many would consider Tehonikonrathe a radical. No radical has ever sounded so sensible.

“Canada is our friend, you are always welcome here but remember, it is our territory and we are a sovereign people,” Tehonikonrathe said.

“All we’ve ever wanted is for the government to leave us alone. That’s it.”

But he digresses. There is a bigger story at play.

The guy who just arrived at the dispensary is at least 75, wearing a baseball hat, his snow white ponytail tucked under.

He rolled into the Health Shoppe parking lot in a BMW with an Expos vanity plate.

All the airs of a successful — or lucky — life were evident. He is tentative.

“Can I help you,” clerk Cheryl Lince asks.

“Uh, yeah … but it’s not for me,” he quickly points out before taking Lince’s advice

Lince has been in Eastern Ontario for around 10 years. In a previous life, the Oakville native was a Toronto Sun Sunshine Girl.

“What’s not to like down here,” she said. “It’s sunny, there’s a nice breeze … and the people are great.”

According to dispensary owners and other locals, the cops merely make courtesy calls to share information, to warn of robberies or just pop by for a cup of coffee.

The first gas station on the territory opened in the early 1970s and because there was no tax (much to the government’s chagrin), the business exploded.

In a territory, 12 miles deep by 3 miles wide, a shocking $1 billion in gas is moved on an annual basis.

“There is more happening here than at any other time in history,” Tehonikonrathe said.

“Anyone who wants a job has a job. Construction is booming. The social aspects have been tremendous. Families are closer. Our people don’t have to drive an hour or two to work anymore so they’re home for supper.”

“It’s a good business,” said Smoke On the Water manager Joe, who didn’t want to use his last name.

“There are no hassles, the customers are great. The government … they’re trying to run the cannabis business like the mafia.”

He added: “There’s zero unemployment here, construction is booming…. But the government has put a glass ceiling on all the good it can do. It’s too bad other communities — native and non-native — couldn’t do this.”

“Then we’d see what the cannabis business could do for the rest of the country.”

At Smoke on the Water, the customer with the Caribbean lilt knows what he’s looking for. So does Ned the clerk.

“I drive down from Ottawa once a month,” the man said. “They have the best buds here. I come down, pick it up and I’m good to go.”