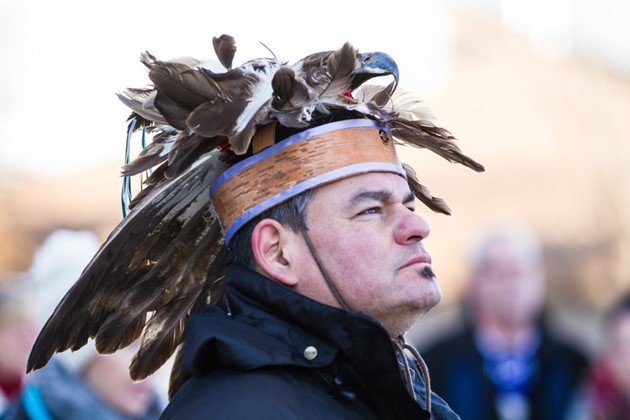 From sootoday.com link to article by James Hopkin, June 10th 2019

Isadore Day is pictured in this 2015 file photo. Donna Hopper/SooToday

Former Ontario Regional Chief Isadore Day wants to talk to proponents of the First Nations cannabis industry about the opportunities that exist within going green.

The founder and CEO of Bimaadzwin – a company that provides services related to project management, facilitation and policy analysis, among other things – is using his company to host First Nation Cannabis Reception: Growth, Prosperity and Cultivating a Green Economy, an event slated for Monday evening at Sault Ste. Marie Delta Waterfront.

“It’s a file that obviously has great interest to the federal government, the provincial government and First Nations, and because First Nations have not been effectively engaged and consulted on this,” Day said.

The three-hour reception will be attended by First Nations cannabis retailers that are interested in discussing the idea of forming an association that would help create a framework for certification, testing and compliance going forward.

“Today’s meeting is going to be twofold – it’s going to be to actually discuss some of those internal issues, and how we put those targeted issues and requests,” Day said.

The timing of the Bimaadzwin cannabis reception isn’t pure happenstance, either.

The Chiefs of Ontario will be hosting its 45th annual All Chiefs Conference over the next three days, beginning Tuesday morning in Sault Ste. Marie.

“I don’t suspect it [cannabis reception] will be an overly huge meeting, but I do think it will be a meeting with the right people, and we are going to be sitting down and talking about what some of the communities are doing in the region here, and hopefully, making sure that they’re able to do what they need to do based on support that we can help them define in the chiefs assembly,” Day said.

The cannabis industry has been on Day’s radar for awhile – it precedes his political career – but now, he says, is the time for some clarity in terms of how First Nations enter a new and lucrative industry.

“Many First Nations are dealing with cannabis on a number of different levels, and the way they’re asserting this on a number of different levels is something that should be brought into center, into focus this way – becoming much more clear about how communities engage, and how communities basically come up with their decisions around cannabis, and the priorities that they set out in their cannabis policies,” said Day. “That really should be the discussion we’re having.”

Bimaadzwin is now publishing an online cannabis and hemp industry magazine, Growth and Prosperity, to highlight, in part, the economic opportunities potentially available.

“This is cultivation, it’s administration. It’s in the field, it’s processing, and it’s distribution and retail,” said Day. “So there’s a value chain within cannabis that is really of interest to First Nations, because there has been a lot of money made so far on cannabis, and it is a lucrative industry.”

Day believes that many First Nations will end up taking the harmonized approach.

“I don’t think the province or the federal government want to end up in court on this, because there was no real consultation with our communities,” said Day. “There were obviously discussions, but there was nothing that was coordinated on a level…where we could actually be recognized as a party to the enabling legislation – [Bill] C-45 – and then the rollout into the provinces.”

“First Nations are saying, ‘absolutely not, we cannot just take this for what it’s worth to the federal government and the provinces, we have to demonstrate what the worth of this industry is from our perspective,’” he continued. “That means putting in place our community laws, it means sitting at the table and negotiating those frameworks with the province and the federal governments, and basically, making sure that our communities are up to speed and supporting what we’re doing.”

Bimaadzwin has been at the forefront of two National Indigenous Cannabis and Hemp Conference events since the inaugural one, which took place in Alberta in November 2018.

“We’ve had federal and provincial governments with us all along, so where the Chiefs of Ontario and the AFN [Assembly of First Nations] may have not have been able to actually move this file, you know, being the former regional chief I understand the food chain, the political apparatus in the federal family, and I’ve been able to keep this ball rolling,” he said.

Day says that through Bimaadzwin’s work with the national cannabis conferences and talks with more than a dozen First Nations, the messaging surrounding First Nations involvement in the cannabis industry has been clear – even if the process is not.

“The playing field is not level, I’ll say that much,” said Day. “The First Nations are saying, ‘listen, if we’re recognized as jurisdictions, if we are seen as First Nations, if reconciliation is real – then we should be able to do this as well.’”