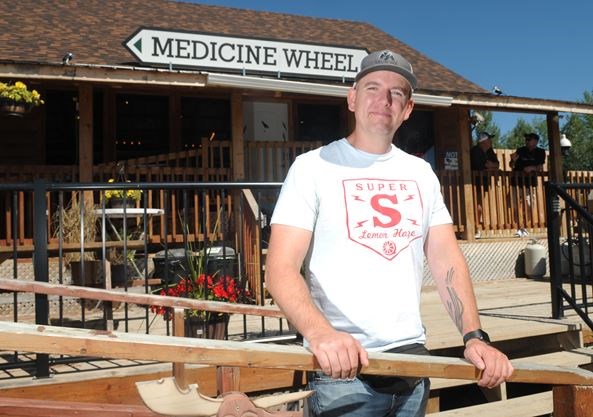 From Northumberland News link to article by Karen Longwell  Aug 23, 2018

Rob Stevenson opened the Medicine Wheel Natural Healing, his first venture into cannabis, a little over a year ago. He is unsure what will happen after the legalization of marijuana but is preparing for a legal challenge. – Karen Longwell / Northumberland News

Rob Stevenson opened the Medicine Wheel Natural Healing, his first venture into cannabis, a little over a year ago. He is unsure what will happen after the legalization of marijuana but is preparing for a legal challenge. – Karen Longwell / Northumberland News

ALDERVILLE — He doesn’t have a criminal record, but come Oct. 17, Alderville’s Rob Stevenson is willing to go to jail for his cause.

Stevenson opened Medicine Wheel Natural Healing, his first venture into cannabis, a little over a year ago.

“Being in this industry, I have had to do a lot of internal soul-searching,” said Stevenson, who also operates other businesses. “Potentially, I am at risk of getting a criminal record, of going to jail, come Oct. 17, for potentially 14 years.”

After Oct. 17, cannabis will be legal in Canada; however, unlicensed dispensaries won’t be. It is a risk Stevenson is willing to take.“I truly believe in this, I believe the Indigenous people deserve to be in this industry and to create our own economy.” — Rob Stevenson, Medicine Wheel Natural Healing owner

“I am willing to go to jail over this.”

His family is prepared and stands behind him, he said.

Stevenson is standing strong on his sovereign rights as an Anishinaabe man of the Bear Clan, belonging to Alderville First Nation. Indigenous people have the right to their traditional medicine and health practices, according to the United Nations Declaration on the Rights of Indigenous Peoples.

“I truly believe in this. I believe the Indigenous people deserve to be in this industry and to create our own economy. We have been using this plant for a long time. We know the earth very well; we are very in tune to it.”

Stevenson and other Indigenous communities are preparing and have been consulting with lawyers.

“We are on sovereign land here — I have a feeling it will come down to a court challenge, a constitutional challenge.”

Each community is different, however, and each First Nation community should decide how dispensaries operate, he added.

The shift to the Progressive Conservative government has meant a move to legal licensed private shops in April; however, Ontario’s Minister of Finance Vic Fedeli made it clear that illegal shops open now will remain illegal after Oct. 17. The government will work with private-sector businesses to build a safe, reliable retail system that will divert sales away from the illegal market, the government announced. There are plans for consultation with the Indigenous community, which was lacking in the previous Ontario plan, said Stevenson.

At this point, Northumberland-Peterborough South MPP David Piccini said he couldn’t comment on cannabis dispensaries in Alderville but did have plans to meet with Chief Marsden to discuss the future.

Although it was the only cannabis dispensary a year ago, Medicine Wheel Natural Healing is now one of seven dispensaries along County Road 45 in Alderville First Nation, giving the short stretch of highway the moniker ‘The Green Mile,’” said Stevenson.

Just across the road Healing House Medicinals opened, on March 19, in two converted shipping containers brightly painted with Indigenous-inspired artwork. Inside, co-owner Amy Marsden said the dispensary is built on her family’s land. Like Stevenson, Marsden is focusing on healing and finds many of her customers are older.

“The stigma is getting lifted.”

Although The Green Mile is becoming crowded, Marsden is not concerned.

“I think if everyone continues to do it properly it could be a huge opportunity for the community,” she said.

The new shops have had an impact on business at Medicine Wheel, but Stevenson isn’t worried. Medicine Wheel even offers a training course and has trained many of the operators of the new dispensaries.

“I have always said that there is enough room in this industry for everyone on this reserve to be involved in some capacity,” said Stevenson.

For the most part, Stevenson has had positive feedback from the community.

“I have spoken with a bunch of local businesses, and they say their businesses have improved dramatically since the dispensaries opened,” he said.

They are putting together a survey to get further input from Alderville community members on the dispensaries.

Marsden said she is not certain what will happen after legalization but right now she and the other dispensaries in Alderville are setting standards.

The dispensaries in Alderville have come together and started an association called the Mississaugas of Rice Lake Cannabis Association, said Stevenson.

“Because there are no regulations on reserve, we decided that we need to put in place those regulations,” said Stevenson. “We are trying to set standards that are equal to or greater than what Health Canada has set.”

Medicine Wheel Natural Healing has created Red Feather certification, which verifies the products are sourced in a pure, sustainable and responsible way and mainly from Indigenous communities. Part of the profits of Red Feather-certified products will go back to the community.

Business has been good at Medicine Wheel. It started with six staff members, and there are now about 25 full-time staff, with 18 from the reserve. It now has 7,500 patients registered. Each person who comes into the shop must consult with a cannabis-educated doctor and become a member. Records are kept for each patient with information about their ailments and what worked best.

“I get people coming from as far as Sudbury — again, it is because we are trying to offer something different. A cleaner medicine and more options,” said Stevenson.

Medicine Wheel now has a full laboratory with a trained biologist testing the cannabis for potency — the THC and CBD along with the terpene profile. The information helps tailor treatments.

“What we are trying to do now is really analyze the terpene profile of these plants, pick out what these terpenes do, and categorize that in such a way that we can use that information to be able to help people pick a better strain,” said Stevenson.

The Medicine Wheel Ailment and Treatment Guide outlines what types of cannabis can help with ailments such as insomnia, pain, arthritis and restless leg syndrome.

The tests also look for pesticides and herbicides — licensed producers and growers are allowed to use 21 different pesticides, but Medicine Wheel wants to stay away from that.

“What we are doing is trying to focus on having very clean, healthy medicine.”

There is a perception that cannabis could be laced with dangerous drugs such as fentanyl, and although Stevenson has never come across that, testing ensures purity.

In addition to Medicine Wheel and his other businesses, Stevenson has been very busy on a number projects.

In collaboration with a Tyendinaga business, he created a new product line called Mukwa Botanicals. The focus is on the whole plant and with the slogan is You Don’t Have to be High to Heal, it is popular with seniors.

Stevenson is involved in a cannabis magazine, Smoke Signals, in collaboration with other Indigenous communities.

In the year it has been open, Medicine Wheel Natural Healing has given back to the community, including a youth sports team and the women’s shelter.

“That’s always been part of my goal — to give back,” Stevenson said.

He wants go further and help northern reserves set up their own cannabis ventures.

It has been an exciting venture, as well. He has met celebrities such as Ian Campeau previously from the Juno awarding winning band A Tribe Called Redand well-known musician Portugal. The Man.