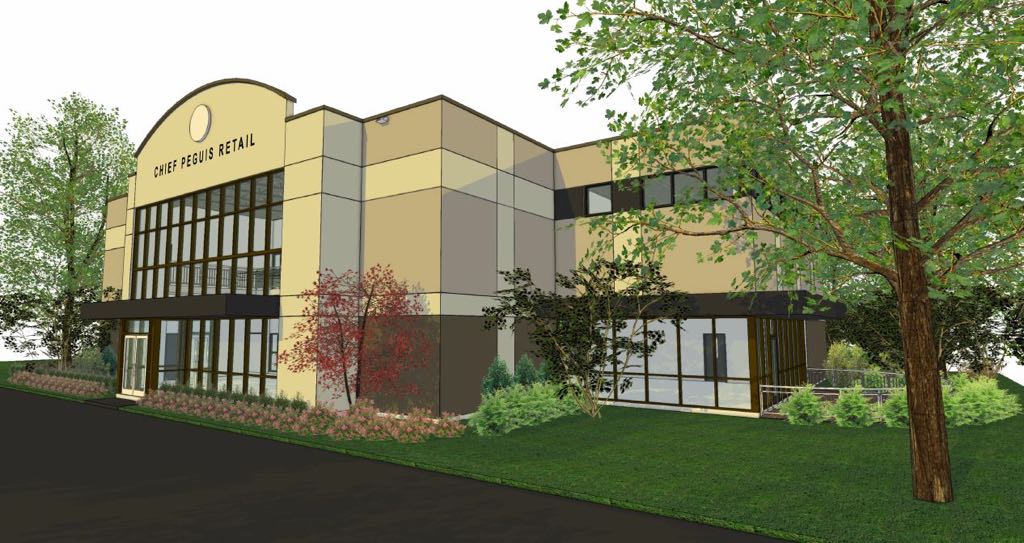 From Winnipeg Sun link to article by Joyanne Pursaga August 8, 2018

A new urban reserve at 1075 Portage Ave. is slated to feature a 14,125-square-foot retail complex by the end of the year.

Peguis First Nation said its first $6.5-million phase of construction at the site will create the structure by December. A few months following construction, that building is expected to house a recreational cannabis store, a location of “The Feast” restaurant, a pain management clinic run by “The Clinic Network,” and a pharmacy.

Future building phases are expected to add a new office building (replacing a 75-year-old one now at the site) and two residential complexes with about 48 rental suites each.

Altogether, that will add up to a total investment of about $30 million on the property, said Peguis Chief Glenn Hudson. Hudson said the development about to officially become the city’s second urban reserve will display a business model Winnipeggers should expect to become more common.

“This is just the beginning. There’s going to be many more to come,” said Hudson.

For example, Hudson said his community also has development goals for the Kapyong Barracks and the Assiniboia Downs.

“There’s a lot of things that are being done in terms of our lands that we’re repatriating within the city … This will be a project that will invest in our people, invest in the community and, certainly, the revenue generated from that will help our community,” he said.

Peguis and the City of Winnipeg have entered a five-year service agreement on the land, which will see Peguis pay about 80% of the municipal taxes the city would normally charge. The province is expected to cover the rest during that term.

Mayor Brian Bowman noted Peguis eventually intends to create a billion dollars worth of investments in the city, including at the larger sites Hudson mentioned.

“It’s a model that we want to continue to explore and see where we can leverage them to attract the investment that’s being discussed … obviously, we want those investments and we want the jobs that come along with that,” said Bowman.

The city and First Nation plan to re-negotiate their tax deal after five years, though Bowman is lobbying the province to allow longer terms in the future. He argues such deals are a key step in reconciliation efforts between Indigenous and non-Indigenous Canadians.

“Our work won’t be finished, in terms of reconciliation and community building, in the next five years,” said Bowman.