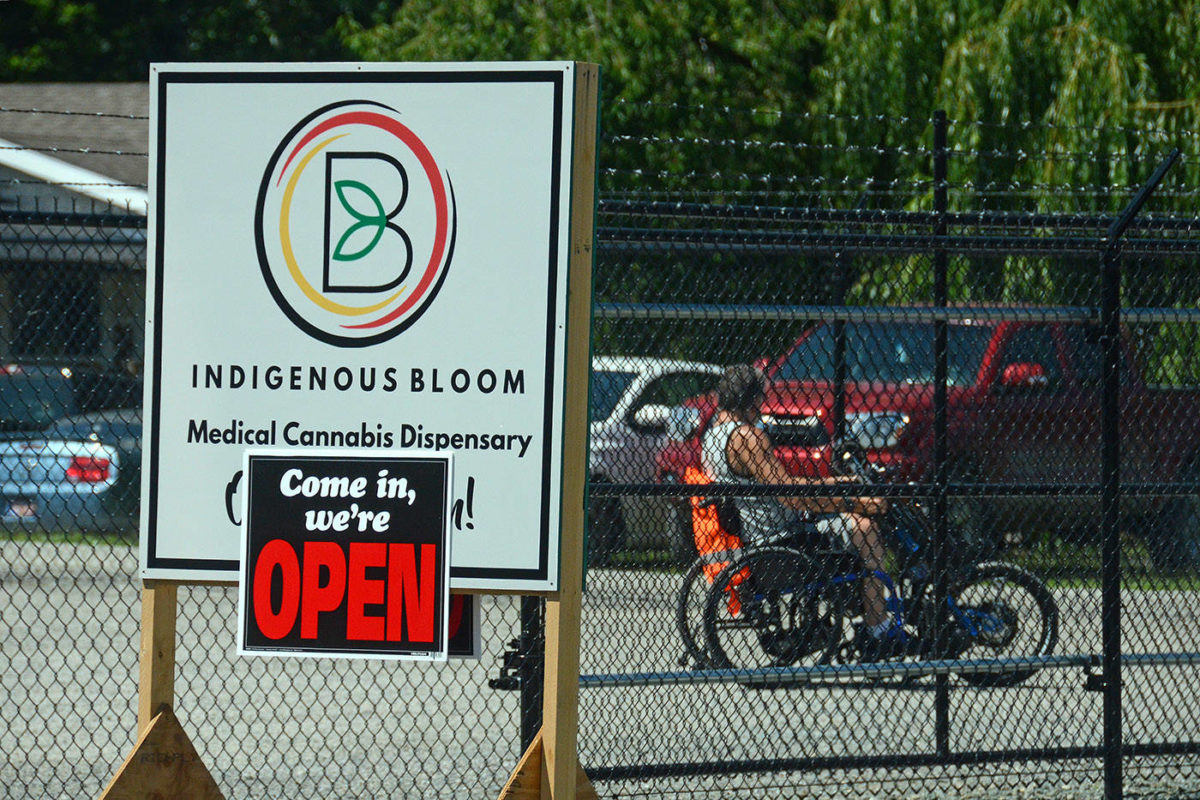 B.C. First Nations get into growing, selling marijuana before legalization

From nelsonstar.com link to article by PAUL HENDERSON, Jul. 6, 2018

Cannabis legalization may be just three months away in Canada but First Nations in Chilliwack aren’t waiting.

A second marijuana dispensary on a local reserve opened its doors this week with a grand opening set for July 11, with a third storefront on the way.

Indigenous Bloom opened its doors to customers on the Kwaw-Kwaw-Apilt reserve on Ashwell Road on July 5 while workers were still on site putting the finishing touches on the medical marijuana dispensary.

And Indigenous Bloom Corp, which is based in Kelowna, is just getting started with some big corporate experience and First Nations leadership on its board.

That includes Chief Isaac Laboucan-Avirom of the Woodland Cree in Alberta, and Robert Louie, former chief of the West Bank First Nation near Kelowna and owner of Indigenous World Winery.

Also on the board are former CEOs of various companies, and former Conservative Member of Parliament for Kelowna-Lake Country Ron Cannan.

Kwaw-Kwaw-Apilt Chief Betty Henry said her community is fully behind the venture.

“It is our intention that the operation of a cannabis business must be under the domain of our people,” she said in a statement. “Our purposes include the elimination of criminals who market illegal drugs to our community members, to our youth and to the society at large.”

So where does the marijuana for sale at Indigenous Bloom’s shop come from? Nearby Shxwha:y Village announced its “intended operation” of a licensed producer (LP) cannabis growing facility through Health Canada, in addition to the groundbreaking of its dispensary storefront on Wolfe Road.

“Our tribe has set goals to achieve economic self-sufficiency and to become fully functioning partners in the social and economic welfare of this great country we know as Canada,” Shxwha:y Village Chief Robert Goldstone said. “We are striving to build a better future for our people and this economic initiative will help us to achieve that.”

The bands say they intend to provide high quality products that originate from First Nations businesses, and they want to be part of the cannabis industry to create employment, careers and increase economic development.

In short, Gladstone and Henry say they will not be left out of the emerging industry, adding “The federal and provincial governments collect billions of dollars in tax revenue from tobacco, fuel, alcohol and gambling with little or no return to First Nation communities.”

As for the growing of the product, a visit to a large otherwise unused warehouse at Shxwha:y Village on July 6 showed vehicle activity out front, and in plain sight were plants growing in pots under bright lights visible through an open door.

As for the legality of all this, all levels of government say “no.”

When asked about the storefronts in Chilliwack, a spokesperson for the Ministry of Public Safety and Solicitor General said “any cannabis retail store currently operating is illegal,” and it’s up to local law enforcement whether or not to take action against them.

“Upon legalization, existing dispensaries will have to close, unless they obtain a licence from the [newly renamed] Liquor and Cannabis Regulation Branch,” the spokesperson said.

“A new Community Safety Unit … will have the authority to deal with all illegal sales outside the provincial regulatory framework. Cannabis enforcement officers will be able to enter illegal cannabis retailers without a warrant, and will be able to seize illegal product and records. They will also have the authority to impose administrative monetary penalties based on the value of illegal cannabis.”

Someone involved with Indigenous Bloom pointed out that First Nations on reserves do not deal with the provincial government, only the federal government.

So what does Health Canada think? Storefront operations selling cannabis, whether they call themselves “dispensaries” or “compassion clubs” are unlicensed and illegal.

When asked a month ago, the Chilliwack RCMP said only that investigation and charges are possible.

“Businesses and/or individuals operating in contravention of the [Controlled Drugs and Substances Act] and Health Canada regulations may be subject to investigation and criminal charges in accordance with Canadian laws,” according to spokesperson Cpl. Mike Rail.

All this comes nearly two months after The Kure Cannabis Dispensary opened its doors on the Skwah First Nation just off Wolfe Road.