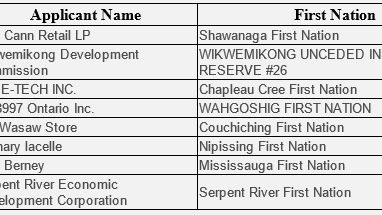 From globalnews.ca link to article by Kraig Krause, Aug 16th 2019

The Government of Ontario rolled out its list of eight First Nation communities who applied for the first come, first serve cannabis licence.

On July 3rd, the second provincial cannabis retail lottery was announced, this time providing 42 licences to private companies, and 8 to First Nations reserves.

Now, the Alcohol Gaming Commission of Ontario is releasing the locations and names of those who got to the front of the line when applying.

Global News spoke to Mississauga First Nations Chief, Reg Niganobe, and he said that once he and his band council heard of the application for a legal cannabis store licence, they quickly acted and applied.

“We previously had concerns over cannabis quality, but the provincial government answered all of our questions, and we decided that it would be a good fit in our community,” said Chief Niganobe.

According to the Chief, Mississauga First Nation band council will run the single shop in the community.

This system is unlike that of Tyendianga Mohawk Territory. The eastern Ontario community of around 4,000 people boasts over 50 unlicenced dispensaries, one of which is its second-largest employer, according to Legacy 420 owner Tim Barnhart.

“We have a staff of 50, and other than the Bay of Quinte First Nations office, we are supplying the most amount of jobs,” said Barnhart.

One Legacy 420 employee told Global News that during his high school years he was preparing to leave the territory to pursue a career elsewhere, but when Barnhart opened the dispensary, it gave him a direction in life.

“I was always interested in cannabis and the science behind it, but I never thought I could make a career out of it. Now, I have my dream job, and I didn’t have to leave my people,” said Jordan Brant.

Brant says people from as far away as Montreal and southern Ontario make their way to Tyendinaga Mohawk Territory to get a taste of what they are cooking up in their state of the art cannabis lab.

“I meet new customers every day, and they are amazed that we offer everything from CBD oil, delicious edibles, and medical marijuana,” said Brant while showing Global News a fresh batch of ‘moon bars’.

In early July, the Government of Ontario released a press release outlining its intentions with the cannabis license on First Nation land.

In part, it read, “the government continues to engage with First Nations interested in developing their own approaches to cannabis to identify how the government can best support efforts by these communities to promote public safety and legal access to cannabis.”

According to the government, this next phase of opening the cannabis industry to more retailers will establish new pre-qualification requirements that will streamline the licensing process with the AGCO and help ensure the readiness of cannabis retail operator licence applicants.

Unlike Mississauga First Nation, Tyendinaga Mohawk Territory has several dispensaries that are already producing cannabis products at an astounding rate — but for Barnhart, he asks why his community would open their flourishing industry to the government.

“My dream has always been self-efficiency for our people, and I see this [Mohawk cannabis industry] as a mechanism to get many out of poverty, without the aid of the government,” said Barnhart.

Shacks and run-down trailers with signs attached to them, reading ‘dispensary,’ on the Tyendinaga Mohawk Territory creates a stigma of the entire industry, according to Barnhart.

“I want everybody to have equal footing and flourish, but at what cost?” said Barnhart.

As for a reaction to the cannabis retail store allocation process on First Nations reserves, Tyendinaga Mohawk Chief Don Maracle was tight-lipped.

Maracle would only say that band council is meeting at the end of the month to discuss government involvement and other ways of policing the booming industry.

When Global News asked how business is going at Legacy 420, Barnhart smirked and said that business was doing very well and that the dispensary is expanding soon.