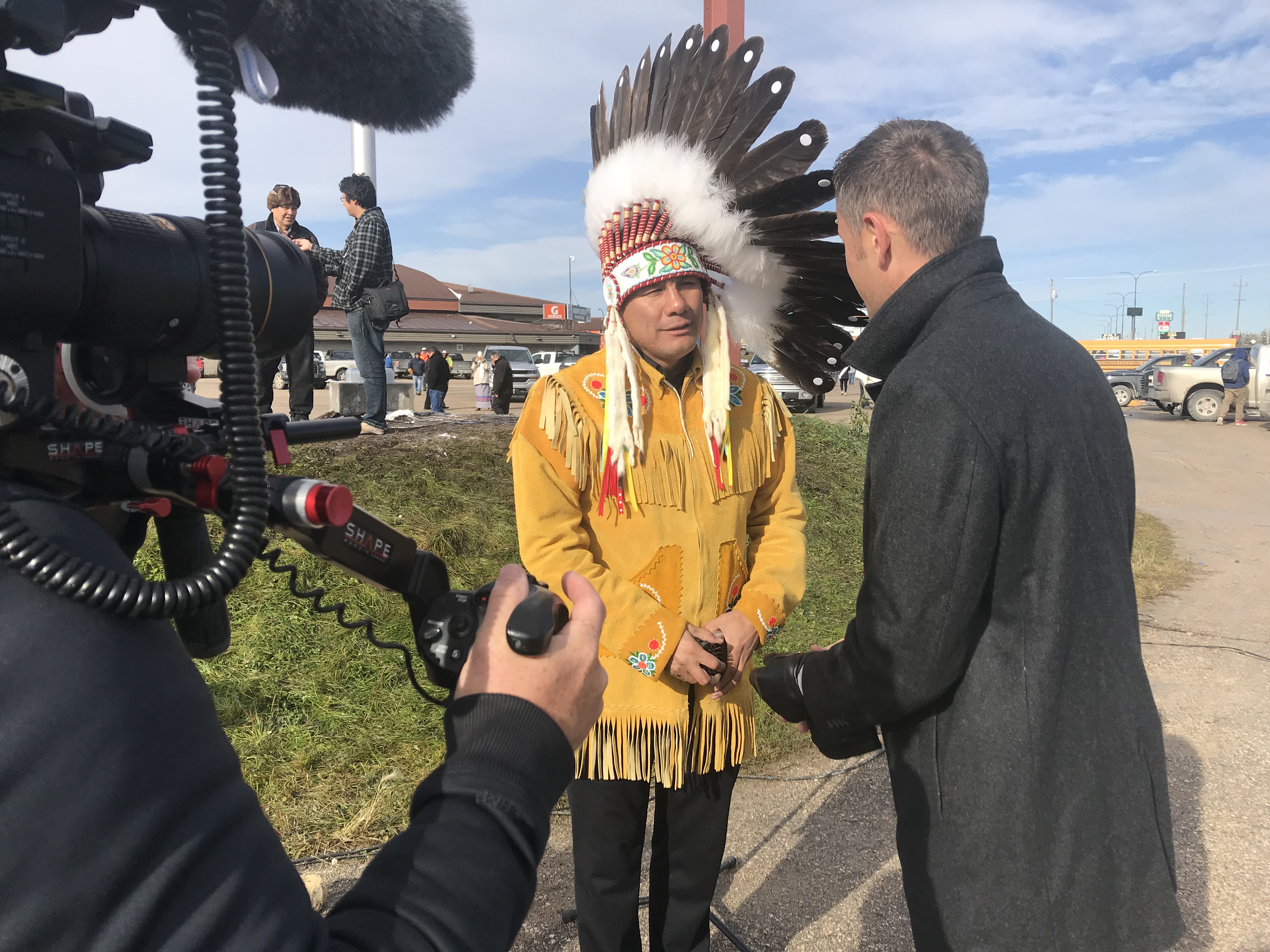 OPASKWAYAK CREE NATION, Manitoba — The drums echoed across the empty muddy parking lot outside the local hockey arena as if a call out to the entire community.

Despite the howling winds and subzero temperatures, almost instantly dozens began to arrive.

By foot, in cars and in buses, the community of Opaskwayak Cree Nation is coming together for a celebration.

OCN, as the locals call it, is located almost 600 kilometres north of Winnipeg, Manitoba.  On this day, the small indigenous community is marking a major milestone, a first ever event despite existing for thousands of years — they raised their own OCN flag.

A proclamation to all their neighbours across the river in The Pas and to the rest of the country, they are a sovereign nation.

Leading the event is OCN’s chief Christian Sinclair. Dressed in his traditional headdress he moves through the crowd of elders and children, congratulating them as the massive flag is slowly raised up the flag pole.

Sinclair sees this day as a first small step towards OCN’s independence — a notification to his community and to the rest of Canada that the status quo will no longer be accepted.

Sinclair devised a plan to get Opaskwayak out of debt, to get the money to pave the roads, build the school and lift the community up: invest in pot.

“The fact that this new, emerging economy of cannabis is taking root in Canada… it puts us at the forefront as a country, but also as First Nations to be afforded that opportunity that has never been given to us before,” he said.

The opportunity came last year when Sinclair was invited to a meeting in Winnipeg.

The head of a medical marijuana company called National Access Cannabis was pitching the idea of opening pot shops on reserves and wanted buy in from local and regional chiefs. But Sinclair wasn’t interested in just opening one store — he saw the potential for much more.

“I quickly turned that discussion around and said instead of being a rung on your ladder, how do we become an owner of the whole corporate ladder?” he said.

“And that’s money and the considerable investment amount. So, the dialogue started, ‘How much do you have?’ And not knowing what that meant, I said, ‘Well, how much do you need?’”

The ask was for $3 million.

A massive amount of cash for a reserve that has been drowning in debt, near foreclosure and couldn’t even afford to build enough housing or schools for their people.

But what OCN did have were several businesses, like a Pepsi bottling plant, that it could leverage to get a massive line of credit.

With council and OCN’s elders permission, Sinclair put up the cash.

That put Opaskwayak in an unexpected position as the biggest shareholders in what could be the biggest cannabis retailer in Canada.

Then Sinclair made an even bigger move — offering NAC a line of credit for $35 million to build 70 of the 200 stores it planned to open across the country.

“Something inside me told me that it’s going to be good for Opaskwayak and if we don’t do it now, no other First Nation is going to take that leap of faith anywhere on that scale,” he said.

But not all First Nation chiefs are on board with OCN’s decision to get into the pot business.

In Sudbury, Ont., the head of the Whitefish River First Nation says drugs and alcohol have been at the crux of violence and poverty on reserves for decades, and Chief Shining Turtle isn’t about to let recreational pot into his reserve now.

“I know what despair feels like, we have had 6 suicides in our community,” he said. “It’s a potential recipe for disaster. It’s an unchartered path and that frightens me… and there’s gonna be people who get hurt and who gets sacrificed. Mostly marginalized people.”

So Chief Shining Turtle’s reserve banned pot all together. They won’t be selling it and they won’t be investing in it, either.

“To those folks who want to invest in those kinds of situations, all I can say, is good luck. I will always invest in our people first,” he said.

But for Chief Sinclair, the profits to the entire reserve far outweigh potential risks.  His investment in National Access Cannabis is already up over 250 per cent and the hope is when all the NAC stores finally open their doors, Opaskwayak’s $3-million investment will balloon.

“With some of the estimates that we’ve heard, for National Access Cannabis, it’s going to be in the hundreds of millions for the company, which means tens of millions for Opaskwayak Cree Nation,” he said.

But more importantly, says the chief, it will give Opaskwayak’s residents the ability to stand as equals with other Canadians.

“It shows pride in our people, and gives them a dignity to be able to walk with their heads high anywhere they go in this country, or in this world. And that’s all we’ve ever wanted as a society, as a First Nation People in this country. “