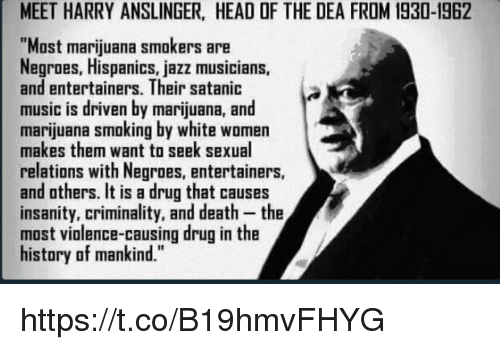 Who was Harry Anslinger (1892-1975) and how did he come to have a deep effect on the Mohawks of Akwesasne?

To begin with we need to understand the product which consumed Mr. Anslinger director of the U.S. Federal Bureau of Narcotics (now the Drug Enforcement Administration) from 1930-1962.Director Anslinger hated blacks, he hated jazz, he hated Mexicans. He believed their music and culture was polluting the rest of the United States and that the use of marijuana by musicians was the mark of a degenerative people, particularly African Americans who he accused of being drug addicts consumed with the desire to seduce white women. He claimed marijuana drove the Mexicans and black people mad, causing them to commit terrible crimes from murder to rape. He instructed his agents to “shoot first” in their raids on suspected users and dealers.Anslinger exaggerated and lied about marijuana and its effects on humans. He suppressed any objective medical report which challenged his claims that it was dangerous and instead showed how it was of dramatic, effective use as a medical drug.

In this he was supported by the pharmaceutical companies and sensational articles published by William Randolph Hearst in his newspapers.In truth, humans have made effective use of marijuana for many thousands of years, dating back to the beginnings of plant cultivation in central Asia.

There are a variety of marijuana plant species the most significant of which are Cannabis Sativa and Cannabis Sativa L. The former produces the buds which are used as a medicine and as a pyschoactive. From Cannabis Sativa comes the chemical substance Cannabidoil and tetrahydocannabinoid (THC). It is the THC which, when ingested by eating or smoking, produces euphoria. There are no scientific reports which show that THC causes any serious physical harm although it may produce a condition of psychological dependency and withdrawals symptoms marked by irritability and insomnia.The medical use of Cannabis Sativa are profound ranging from pain relief, reduction of strokes, reduction in epileptic seizures, muscle spasms, eliminating nausea and vomiting in chemotherapy, insomnia, anorexia, migraines, arthritis and glaucoma. This has been demonstrated over thousands of years in regions such as Germany, China, India and throughout the Mideast.

It was an acceptable, integral part of the physicians treatment of pain and the above conditions.Its relative Cannabis Sativa L is a plant called hemp without THC and cannot be used as a pyschoactive. That plant is of enormous industrial and domestic use. It produces rope, fibers for clothing, as a food, for its oil, to make paper and as a biofuel. It is prolific and can grow upwards of 16 feet in height and is adaptable to many climates including Akwesasne.In the colonial era hemp was so vital its planting was legally required in Virginia. It was essential for the making of rope for the British Navy, unique in terms of its strength and durability.Cannabis Sativa was considered sacred by many religions. The Hindus, Sufi Muslims, Chinese and Germans valued the plant in their spiritual rituals and more recently the Rostafarians.

It is withing the “Five Kingdoms” of natural herbs in India and was widely used by the Vikings on their sea voyages.The problem for the Mohawks and North America at large was when Harry Anslinger swept aside the positive uses of marijuana and decided he would make it his life’s work to make it a narcotic on the same level as heroin or cocaine. He realized he would have problems with making the actual plant illegal, given its widespread use, so he persuaded the U.S. Congress to pass, and President Roosevelt to sign, the 1937 Marihuana Tax Act which made it a crime to avoid paying federal taxes on its possession or use.Ansliger was relentless is his enforcement of the Act. He decided to make an example of Billie Holiday, one of the greatest singers of the 20th century. He hounded her without mercy, managed to secure a conviction which sent her to prison and when she was paroled continued his persecution even as she lay dying in a New York City hospital. The illness which led to Holiday’s death in July of 1959 can be directly related to Anslinger’s fanaticism and his hatred for blacks.

When marijuana become associated with the 1960’s counterculture the response by U.S. federal authorities was to increase its efforts to investigate, arrest and imprison users. Since Akwesasne is located in a unique geographical position the area was targeted by drug smugglers to carry the product across the territory for distribution throughout the northeast. It was the criminalization of marijuana which created the gangs which exploited our community. That Canada and most western European nations followed the American lead only made the situation more critical and led to the corruption of the region.Many Mohawks did not agree with the Canadian-American labeling of marijuana as harmful but that did not prevent their arrest.

Hundreds of Mohawks now have criminal records which are used against them in seeking jobs or simply traveling about because of their conviction records.The issue is why our combined leadership agrees with the Americans as to making marijuana illegal on the local level. We have a strong history of defiance when it comes to the imposition of alien rules. It can be said that whatever Akwesasne is, whatever businesses are currently operating, whatever government programs we enjoy, whatever spiritual practices we take a part it or the fact that there is a territory at all comes from the basic truth that we have defied the U.S. and Canada when necessary.

Otherwise, had we been as passive as we are now with regards to marijuana, we would be living in Kansas. We have a longhouse people, a tribal council, a Mohawk council of Akwesasne for the simple reason that we said no to those agencies which sought our demise.This should be the case with marijuana. We must know its history and why it was demonized. We must make use of its medical and industrial potential. We must insist that any Mohawk who has a marijuana related conviction have that record purged.

If we regulate its growth and apply its powers we can, literally in one growing cycle, remove organized crime altogether from Akwesasne as it relates to marijuana.

Why let Harry Anslinger dictate to our people even from his grave? It does not make sense and is contrary to our belief that we have the inherent right to self determination.

Doug George-Kanentiio, Akwesasne Mohawk, is the vice-president of the Hiawatha Institute for Indigenous Knowledge. He has served as a Trustee for the National Museum of the American Indian, is a former land claims negotiator for the Mohawk Nation and is the author of numerous books and articles about the Mohawk people. He may be reached via e-mail at: Kanentiio@aol.com or by calling 315-415-7288.