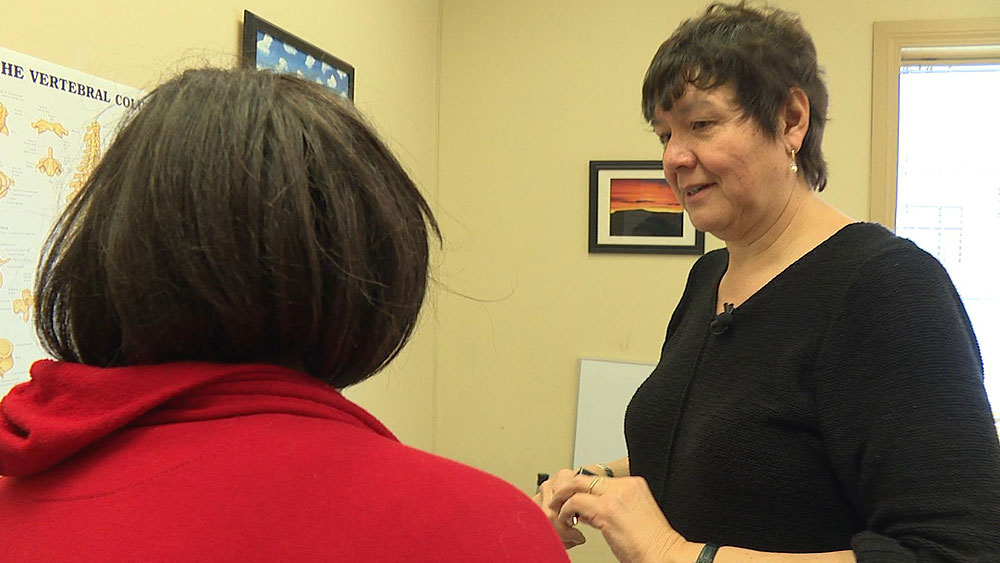 On the Blood Tribe reserve in Alberta, witnessing an overdose has become a daily occurrence for Dr. Esther Tailfeathers who works at the community’s department of health.

“There was one case where one pill of fentanyl was split in four, and four different people shared the one bean of fentanyl,” says Tailfeathers. “All of them overdosed and required more than six vials of naloxone to revive them.

“It was horrific for everybody here.”

The Blood Tribe continues to deal with an opioid crisis that doesn’t seem to be going away anytime soon.

Getting her family back

She has been clean from a fentanyl addiction for almost four years. Her motivation? The thought of her children being released into the foster care system.

“Them almost getting taken away from me, it was hard knowing that – either you get help today or if you don’t, we’re going to go take your kids.” she said. “I thought about my kids and I was like, no. Okay I’m going to get help, I’ll do it for them.”

Eagle Plume got help in time, but Tailfeathers says parents losing their kids because of drug use is an all too common story in the community.

“There’s not a huge safety net for them. We’re so busy concentrating on saving the lives of people who are addicted that we’re not watching the fallout around them and the youth are absorbing a lot of the grief,” Tailfeathers says.

“We’re seeing more youth becoming addicted. We had a 13 year old that overdoes in front of our tribal office a week ago.”

Eagle Plume says a lot has changed in the community over a short period of time.

“It feels like we’re living in the city with the sirens,” said Eagle Plume, “We never used to be like that. When you hear the sirens, you just know what it is.”

Tailfeathers says the community has taken major steps to save people from overdoses.

Emergency Health Services has increased the amount of ambulances and team members and the Blood Trobe police has more officers.

But while lives are being saved, Tailfeather says families have lost their housing to addictions, children are becoming homeless, they’re hungry because they aren’t getting the nutrition they need and many are not attending school.

Tailfeathers says 39 per cent of babies from the Blood Tribe are born into neonatal abstinence – a term used when an infant goes through the withdrawl after exposure to narcotics in the womb.

“That’s one part of our populations that we haven’t been paying attention to and we really do need to be concerned.”

Tailfeathers says the root causes of addiction need to be treated – including a faulty health policy.

“The prescribing of prescription opioids is part of people getting hooked on opioids – it’s a slippery slope,” says Tailfeathers.

“The issue of opioid addictions is basically treating the pain that we have and the trauma that we’ve had over the last century and a half from colonialism, racism.”

Tailfeathers says having physicians prescribe a low opioid prescription like Tylenol 3s could be a start to building tolerance.

“When they reach a level where it’s not working for them anymore, they seek higher, more potent stuff like fentanyl and heroin from the streets,” she says.

CBD (cannabidiol), along with THC (Tetrahydrocannabinol) is an active incredient in cannabis. But unlike THC, CBD does not produce a “high” feeling.

According to Tailfeathers, CBD can be an alternative to pain management but there’s a problem – it’s not eligible for coverage under the Non-Insured Health Benefits of Indigenous Services Canada.

“It’s what people are thinking may be helpful because cannabis works on a different pain receptor than opioids do and we don’t see people overdosing on cannabis,” she says.

But Indigenous Services says it is not approved by Health Canada.

“In order to be considered for listing on the NIHB Program Drug Benefit List, a product must be approved by Health Canada under the Food and Drug Regulations (FDR), have a notice of compliance,” the  statement from Indigenous Services says.

According to the Canadian Health Food Association, the government needs to sit down and seriously consider offering Canadians a chance to obtain CBD products.

“Many Canadians see recreational cannabis as their non-prescription way to access CBD for health purposes and since CBD is a natural substance, we believe it should be regulated and sold as a Natural Health Product,” explained the associations President Helen Long in a statement released in November.

Tailfeathers says healing doesn’t stop at the drugs doctors are prescribing, or what the government will or will not license.

Overdoses have impacted the economy of the Blood Tribe as well.

“It would be so nice if we could be spending all that money that we’re spending on saving lives, if we could spend that on the other end and make this a really nice place to be and actually dealing with the trauma issues that we need to deal with, but we’re not getting there,” Tailfeather said.

As Eagle Plume makes another visit to the department of health, she says she encourages others struggling with addictions to seek help.