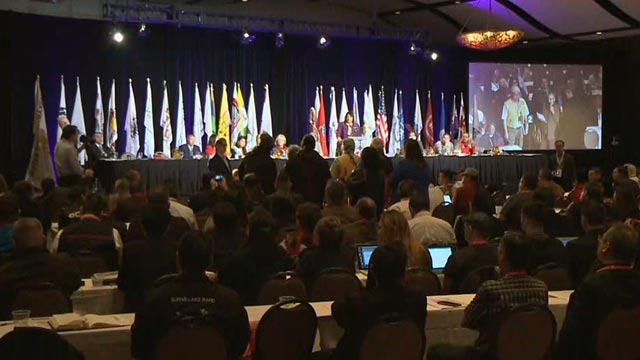 With several pieces of Indigenous-focused federal legislation in the works, Indigenous leaders and representatives are exploring ways to protect and strengthen their rights.

But with more than 1,000 delegates and 237 chiefs or proxies, finding consensus on these laws will be a challenge. That’s not lost on AFN National Chief Perry Bellegarde.

“We called this special chiefs assembly because there is so much happening. Several pieces of legislation are coming at us, and we want to be sure First Nations benefit from all of them,” Bellegarde said at the Casino du Lac-Leamy on Tuesday, noting it’s a rare special chiefs meeting specifically on federal legislation. “We want to be sure any legislation respects our rights and doesn’t impact in a negative way our treaty rights or our Aboriginal rights and title.”

But with the 2019 federal election on the horizon, he said there’s a “sense of urgency” to pass certain pieces of legislation, particularly the Indigenous rights framework.

Manitoba Keewatinowi Okimakanak Grand Chief Sheila North  said she thinks it’s possible to reach a consensus on these laws – but it will take time.

Lower Nicola Chief Aaron Sam Sumexheltza said the meeting is important to gather updates on these pieces of legislation, but he thinks there should be other avenues to engage with Indigenous people so communities can “be proactive, and not always be reactive to what the federal government is doing and maybe enact our own legislation based on our own Indigenous laws.”

Kahentinetha Horn, an elder with the Mohawk Bear Clan of Kahnawake, intervened during a Q&A at the assembly on Tuesday, grabbing the microphone and calling the assembly “illegitimate.”

“Canada may have convinced some foolish Indians to sell us out and extinguish our inherent rights, but we as sovereign people are not on the market,” she said, with burning sage wafting behind her. “You and your AFN are illegitimate and do not hold jurisdiction as negotiators of our rights.”

Horn, who was at the forefront of the 1990 Oka crisis, later told reporters that Indigenous people are not being heard.

“The only ones that are heard are the ones that are flown in here,” she said, standing outside the Casino du Lac-Leamy. “They stay in the casino and they’re treated, they’re given money, they’re given recognition, they’re given jobs and the rest of us, where are we? We’re living in third-world conditions and nobody in the world hears about it. I think the world has to come to our aid and stand with us.”

In his speech to the group of Indigenous representatives, Conservative Leader Andrew Scheer spoke of creating equal opportunities for Indigenous children and developing the country’s energy and resources.

“It’s time we found ways to extend those opportunities to the Indigenous people of this country,” he said. “That is what we mean when we say we must do better.”

“We need to break free from the colonial status quo,” he said.

Published in Assembly of First Nations, News and Reprint