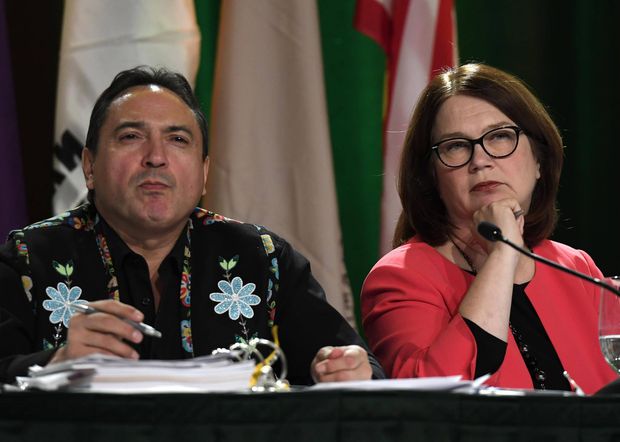 By admin on December 6, 2017
Reprinted from the Globe and Mail, Dec 6, 2017.
By GLORIA GALLOWAY
OTTAWA – First Nations leaders say they must be given the right to govern the sale and distribution of legalized marijuana within their communities and to set the laws that will oversee its use by their people.

Chiefs attending an annual conference of the Assembly of First Nations (AFN) on Wednesday expressed wide-ranging views on the federal Liberal government’s plan for legalizing cannabis by next July 1.

Who knew legalizing marijuana could be so complicated?

Some told the assembly they have not had enough time or money to prepare for the change and urged the AFN to ask for a delay in the implementation of Bill C-45, which would make marijuana legal in Canada for the first time in 94 years. Others said they embraced the legalization of the drug and are looking forward to sharing in the wealth that will be generated by the cannabis industry.

But there was widespread agreement that it is the First Nations, and not the federal or provincial governments, that will determine the rules around the use and sale of marijuana on reserves.

The AFN has struck a committee led by Ontario Regional Chief Isadore Day and Quebec Regional Chief Ghislain Picard to ensure that First Nations have the support they need to adapt to legalization of marijuana and to document concerns around the health, social, and economic issues.

“Above all we do need to look at this from a jurisdictional lens,” Mr. Day said. “Our people are going to say, ‘Listen, we have aboriginal treaty rights, we have economic rights as First Nations people. Who is Canada to say we can’t have a dispensary in our community?'”

Even though the federal government is letting the provinces decide such things as the age at which someone may legally possess cannabis, Mr. Day said the First Nations may not feel bound to adhere to the provincial rules.

For instance, a province may set the age at 18, he said, “but what if a [First Nations] community says we want it to be 23 or 24 because the studies show that the development of a young person’s brain isn’t complete until they are in their 20s?”

The communities that most oppose marijuana legalization tend to be the smaller and more isolated reserves in the northern part of the country where the people will be consumers of the drug but have little chance of cashing in on the potential financial windfall of the cannabis business.

“Marijuana is just another drug that people will take advantage of,” said Ignace Gull, the Chief of Attawapiskat in northwestern Ontario. “It will affect the community because we don’t have the resources to deal with this. There is no funding to educate or make people aware of what cannabis is all about.”

But the chiefs in parts of the country that are closer to urban areas see advantages to legalization and want to be left to their own devices when it takes effect.

“They want in on the economic benefit to create jobs and earn revenue,” said Donald Maracle, Chief of the Mohawks of the Bay of Quinte in southeastern Ontario.

And while there should be regulations that prohibit driving while under the influence and that stop children from getting their hands on the drug, Mr. Maracle said “there is a huge question about whether Ontario’s laws can even apply on reserve.”

Randall Phillips, the chief of Oneida Nation of the Thames, near London, Ont., said the legalization of marijuana is just another way for the federal government to profit from a product that otherwise has been sold on the black market. But the First Nations should also benefit, and on their own terms, Mr. Phillips said.

His community is applying to become one of the limited number of licensed growers of cannabis. It is also home to a marijuana dispensary and the people who run it do not believe they need a licence to operate it, Mr. Phillips said.

As for the First Nations who want legalization to be delayed, he said “there’s all sorts of ways they can stop it from coming in. We don’t have that luxury down south, so we have to think about it in a different way and with a different approach.”

Published in Assembly of First Nations, Legalization and Reprint