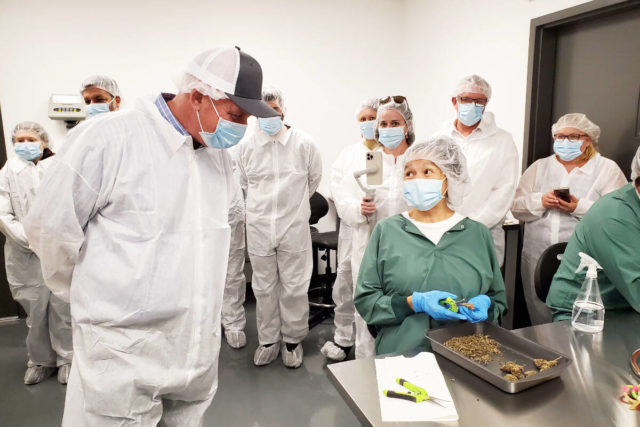 Marijuana grown at the facility will supply WLFN’s Unity Cannabis retail outlets in Williams Lake, Merritt, Penticton and Lac La Hache as well as be a venue for cannabis tourism.

“We talk about how do we diversify opportunities here in the region,” Sellars said before the tour. “It’s not just mining, it’s not just forestry, it’s not just ranching, but it’s also things like cannabis.”

The majority of the people working at Sugar Cane Cannabis and in the Unity retail store are WLFN community members and First Nations from the region, he added.

“That is something that we do take great pride in, but it doesn’t just stop there. There are non-Indigenous people working for all our businesses and all of our corporations.”

Adjacent to the storefront is one of the growing rooms that has windows through which the public can see the cannabis plants growing.

Sellars told Farnworth the agreement they made with the provincial government in 2020 to operate Sugar Cane Cannabis has given them the opportunity to move forward.

“We want to see success stories like these for the region, but we do need support on a number of different fronts,” he said. “Cannabis is just one of them.”

Daniel Penny, chief operating officer of Unity and Sugar Cane Cannabis, said the next step is to go through the processing license application to Health Canada so more processing can be done in-house.

Right now it takes about 60 days to register, ship product to the processor, have it shipped and bagged at the processor, and sent to the BC Liquor Distribution Branch before it is returned to go to a retail stores, Penny explained.

Doerkson asked how long it takes for the cannabis to grow for cultivation, to which Penny responded about three months, but timing depends on the strains for the plants and if they are left to flower longer or not. Each of the growing rooms were at different stages.

Doerkson also asked if there were complaints about the smell, saying he was “surprised it wasn’t more aromatic.”

“Not too many,” responded Penny, adding when the flowers form on the plants the smell is stronger.

Farnworth said thinking back to his first meetings with WLFN about the project, it was “really gratifying to see the end results of an amazing facility like this that is providing benefits and jobs.”