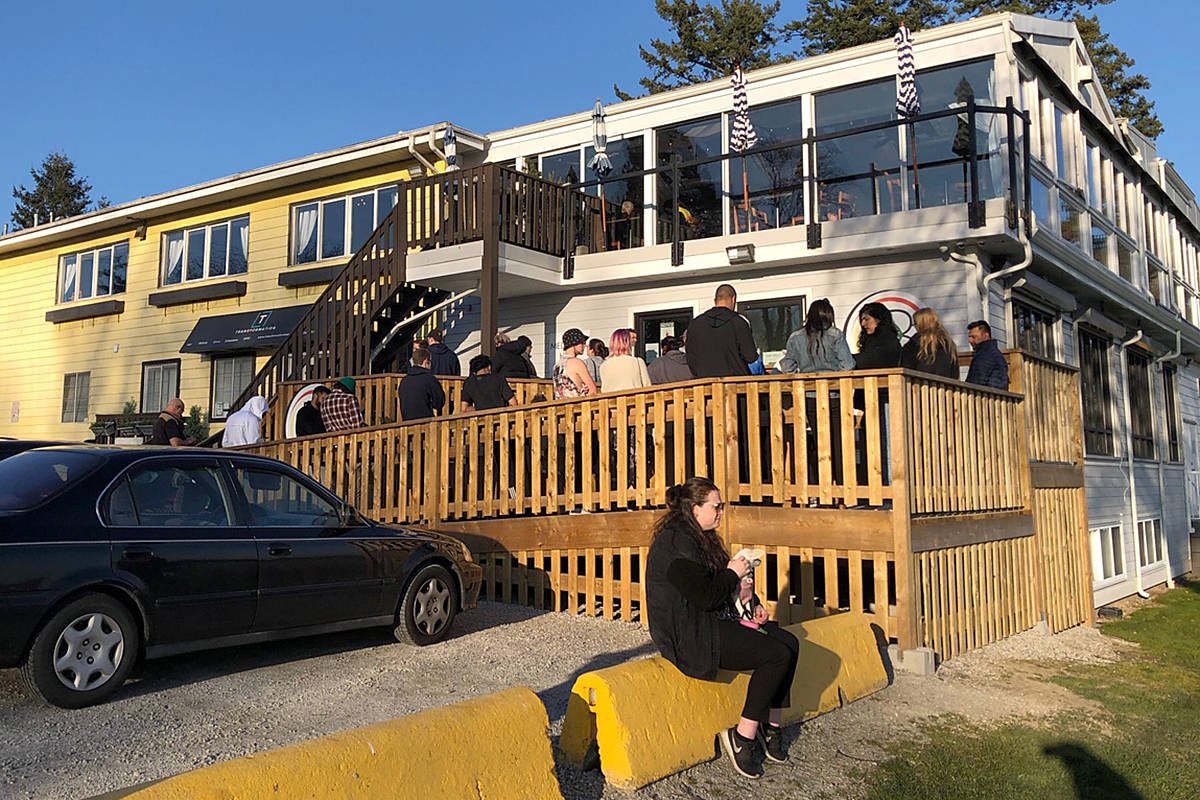 With crowd-control rules being put in place in light of the COVID-19 crisis, one White Rock business remains among the city’s busiest – and is working on measures to ensure social-distancing is being practised.

This past week, Indigenous Bloom – the Semiahmoo First Nation owned-and-operated cannabis dispensary on Marine Drive – has seen a noticeable uptick in volume, with lineups that have often spilled out into the parking lot. The crowds have been substantial enough to lead some local residents to wonder – via social media posts as well as emails to Peace Arch News – whether the business is following the appropriate social-distancing guidelines, which discourage groups of people from gathering in close proximity.

However, Semiahmoo First Nation Chief Harley Chappell told PAN Friday that both the SFN and its business partners at Indigenous Bloom have been working to enforce the new provincial guidelines.

“I have received a call from our partnership to ensure and enforce these mandatory measures,” Chappell said by text message. “This was a plan that has been implemented in conjunction with health ministry requirements.”

Like many businesses that remain open, crowd-control measures have been put in place at the store, which are in turn contributing to longer lineups outside. Currently, only three to four customers are being allowed in the store at a time, Chappell said.

As well, “more spacious parking” has also been opened, he noted.

Staff are also wearing gloves, regular sanitation is taking place and “we are exploring Plexiglas shielding being installed,” Chappell said.

Indigenous Bloom – which opened last summer – isn’t alone among dispensaries seeing a boost in business as more and more people collect supplies as they self-isolate. The Associated Press reported this week that cannabis-based businesses have been booming in major U.S. markets, as people “stock up for potential quarantines or simply light up in search of relief during anxious times and government lockdowns.”

At The Herbery, which operates two stores in Vancouver, Wash., sales have spiked about 30 per cent since last Friday, when Washington Gov. Jay Inslee announced widespread school closures and other measures to deal with the outbreak. One store saw sales double on a single day, said owner Jim Mullen.

“People are buying four or five items instead of one or two,” he said. “People are asking what the legal limit is. We’re seeing bulk buying and people stocking up on products.”

In response to the COVID-19 pandemic, some liquor stores across Canada and in the U.S. have cut hours, which also results in longer lines and, in the words of one expert, amounts to a ‘half-measure’ that could undermine efforts to contain the virus.

“Reducing hours and concentrating customers into crowded (spaces) makes no sense, as would forming lines outside,” said Donald Milton, who studies the spread of virus particles at the University of Maryland.

He recommends either closing stores entirely or maintaining regular or even extended hours.

Indigenous Bloom’s Facebook page still lists its open hours as 9 a.m. until 9 p.m. As well, a note on the page from March 16 asks that patrons to stay away if they are sick.

“Help us protect our customers and prevent any potential spread of COVID-19 and other illnesses. Please do not visit today if you are unwell. Thank you!”

The page also lists some precautions for its customers to take during the crisis, such as to avoid sharing joints, bongs, vapes and other devices,” while also suggesting people “increase your medicinal remedy intake such as CBD to give your immune system a natural boost.”

– with files from Tracy Holmes & The Canadian Press