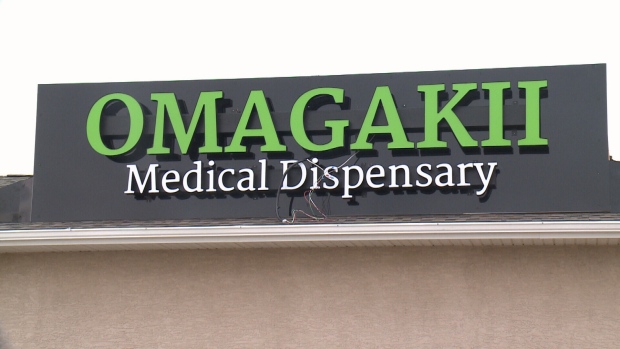 From ctvnews.ca link to article by Michaela Solomon and Creeson Agecoutay, Oct 17th 2019

Omagakii Medical Dispensary held a soft launch at the end of September and is located at the former Saulteaux Junction Gas Station west of Regina.

The store is one of three First Nation owned and operated cannabis retailers in Saskatchewan that are not approved by the province. Chief Acoose says the majority of members voted in favor of the dispensary to help benefit the First Nation’s economy, and that it is their sovereign right to contribute to and benefit from the new cannabis industry.

According to Chief Lynn Acoose, the dispensary is overseen by a licensing board that makes sure regulations are followed and the cannabis is safe to use.

“We went with the same age restriction as the federal law,” Acoose said. “We do have purchasing limits here. Our laws require us to test every product that comes in here to ensure supply safety.”

Chief Acoose said the First Nation does not see cannabis as a traditional medicine, but view it as a medicine overall.

“The sales have been steady, slow but steady, because we serve kind of a niche market, focusing on compassionate care,” Acoose said.

Acoose is in discussions with the federal government about legislating cannabis on reserve.

Gene Makowsky, the Minister Responsible for the SLGA said he “encourages consumers to use the licensed system.”

The First Nation plans on hosting a grand opening of the store next week.