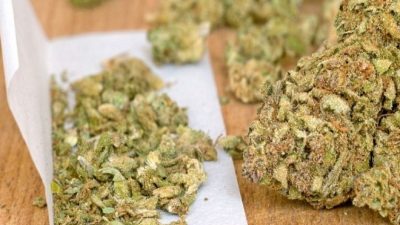 New Indigenous-owned pot shop in Port Alberni first of its kind in B.C.

Tourists heading to Tofino, B.C., can now stop for both gas and grass in Port Alberni on their way to the west coast of Vancouver Island.

The Tseshaht First Nation has opened its own provincially-licensed cannabis store right next to the Tseshaht Market gas station at 7583 Pacific Rim Highway. Orange Bridge Cannabis, according to the Liquor and Cannabis Regulation Branch, is the first cannabis retail store licence issued by the province to a First Nation and the community hopes it is the first step in what will be a growing industry.

“Hopefully, someday we grow our own cannabis,” said Tseshaht council member Ken Watts in a phone interview with CBCs All Points West, adding that the community will be exploring cultivation opportunities in the coming months.

But for now, said Watts, the community is focused on the new shop, which employs five members of the First Nation and sells cannabis supplied by the province. Orange Bridge Cannabis, which had a grand opening ceremony Sept. 11, announced Tuesday it will be open seven days a week to the public.

“It was a historic day for our people,” said Watts.”We haven’t opened a business on the highway for a number of years, so it was a big day for us.”

Watts said it was not easy to get the store up and running because the province had never issued a licence to a First Nation before and it took almost a year to get all the administrative details worked out.

“It’s a sign they need to invest resources into administration at the provincial level to move things through faster,” said Watts.

Now that everything is in order, the community will decide what to do with the revenue the store generates. Watts said it is likely the money will be invested in trauma and mental health support for First Nation members.

But the bridge is grey

Orange Bridge Cannabis opened just after the summer tourist rush, but it’s the locals who are likely to get a kick out of the name.

Port Alberni’s historic bridge, which runs over the Somass River and leads to the Tseshaht Indian Reserve, was painted grey in the 1990s, but Watts said almost everyone in the community still calls it the orange bridge.

According to Watts, more than a million travellers cross the grey bridge and will now pass Orange Bridge Cannabis, on their way to the island’s west coast every year.