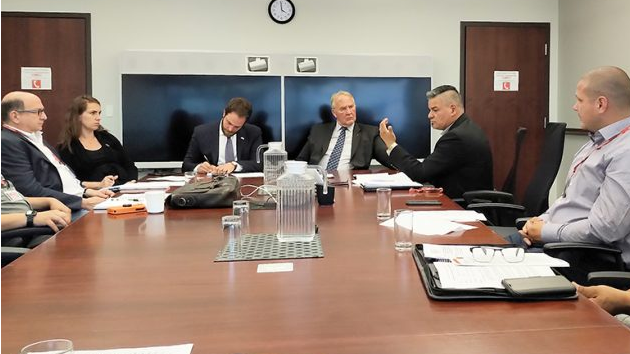 From theturtleislandnews.com link to article by Lynda Powless, August 28th 2019

Mohawk Chief Allen MacNaughton told council former cigarette plants are being turned into cannabis plants and neighbourhoods are complaining of increased smells.
“I believe you should have some say in what goes on around you. There’s people that are right next to GRE (Grand River Enterprises) and they have never been asked if they wanted that plant there.

“He said there have been complaints for years over dust and controls at the plant.
“There is so much dust coming from that plant and landing on homes and in creeks and people
complained but nothing has been done to fix the situation. Nothing is regulated.” He said the HCCC needs to work on a solution “not just say it’s a mind changer and say no. The reality is it’s here and how can we best help people control it.”

Local resident Mike Davis told the HCCC a group of about 30 local cannabis retailers have been
meeting and do not want to work with, or under the SNEC or its controversial cannabis commission.

Davis accused SNEC of using cannabis to introduce taxation to the community. “The band council wants to impose a gross sales tax of 8% on us,” he told the HCCC.

“This is the first tax they will introduce on us. After that it will be a land tax or some other tax.”
With SNEC’s recent injunctions against local protesters and community members and use of local police, Davis said the elected council will be jailing Six Nations people.

He said the group of 30 people have begun working on their own industry guidelines that include
quality control, safeguarding children and donating to the community.

He said community regulations need to be put in place, not band council regulations.

He said without community regulations only the rich will prosper.

“The only people that are going to make money off this are the millionaires and band council. “
One woman told HCCC her cannabis business on Sixth Line has been raided twice and she lost all of her product and cash.

She said she is working with the group. ”Who wants to give band council $5,000. That’s what they want from us.”

SNEC regulations impose a $5000 permit fee. She said “the only ones that would make money are the millionaires that can afford the $5,000 and the band council.”

She told the HCCC, “I appreciate it, if you guys would stand behind us. No one wants to stand behind band council and give them our money. We would rather give our money to you’s and our people.”

Davis said the group is willing to have these quality standards and are willing to give back and be open and transparent.”

Davis proposes instead of an “8% tax” businesses would provide community contributions between 1 and 99 percent as a donation not a tax to the community. He said donations have been given to the girls 􀂦eld lacrosse team and demolition derby competitors.

He warned the HCCC “If we don’t step up and do this as a community we are headed down a really, really bad road.“We are more than willing to give back to our community but we are not willing to give to the elected council cause their just in it for themselves. The whole point is to build up our community to where it should be.”

Mohawk Chief Allen MacNaughton said the council has passed a resolution supporting the Mohawk Chiefs in Akwesasne’s position that they are against any cannabis being used on the territory there because they consider it a mind changer. “I would like to remind this council that we also need to pass our own regulation here.”

He said the council needed to consider the medical bene􀂦ts of cannabis. “A lot of people have used it for different things from seizures to cancer. So we need to learn more about this and recognize the medicinal side of it and as I said before it should be closely regulated.”
He said the HCCC also needed to address the effects Canada’s decision to change its laws to permit recreational use of marijuana will have the Haudenosaunee.

“Again they are trying to regulate us. The federal government said it was doing it to control the black market but its had the opposite effect. They’ve made a bigger black market and to me it doesn’t seem to be about the people…it’s about money and who is going to control it.”

He said it is creating issues at Six Nations. “It’s not just band council forming a committee, people are growing it, then we see Fields being plowed under, and other people from here licensed to grow cannabis off reserve.”

He said the HCCC does not have a force to impose regulations.
“We don’t have a marshal or police force. We rely on the people to stand up for us. That’s what they tried to do a few weeks ago at band council and band council ran to an Ontario judge who told police here what to do and they did it.”

SNEC called in Six Nations Police two weeks ago to remove protesters who had been gathered on the front lawn of the band o􀂨ce building for the summer. SNEC sought and was granted an injunction from a provincial court to remove the protesters.

Royanni MacNaughton said that police move signalled a change in policing at Six Nations.
“That’s changed from 12 years ago when the police listened to the chiefs. Why has that stopped. What happened to that relationship.”

He said during the Oka Crisis of the 1990s Canada and Quebec were trying to recruit native police officers to put on the front lines at Oka.
“They wanted them to work against their own people. The Police Chief from here told them he would never stand against his own people. So what has happened.”

Royanni MacNaughton said talks have to be held with the Six Nations Police. “ We need to look at establishing talks with the police down here even if it is to educate them. It seems our own people need educating about us.”

He said “regulations need to be developed that we all can live with here. That’s the work that has to be done.”

MacNaughton warned the HCCC ignoring the problem will cause more chaos.
“Council can’t ignore it. We can’t just say no. We can but the results are it will be just like the cigarette industry 30 years ago. We need to try to take care of everybody so it won’t be so individualistic like it is today with everyone doing their own thing. Everyone looking out for the individual.”

Six Nations Elected Council (SNEC) passed its own cannabis regulations earlier this year.
Since then it’s move to appoint an arms length cannabis commission has come under fire with one commissioner removed , a second accused of reporting a company that had sought a permit to police and two band councillors had to be appointed to the former arms length body.
Sources have told Turtle Island News SNEC has also proposed an agreement with Seven Leaf Tobacco in Tyendinaga to be the sole supplier of cannabis to Six Nations. Seven Leaf Tobacco representatives were involved in the interviewing of potential commission members.

The commission operates on a $400,000 budget with commissioners paid $150 per meeting and the chair $200. Council appointees Sherri-Lyn Hill Pierce and Audrey Powless-Bomberry will also receive honoraria.

The commission guidelines call for five community members selected and appointed by SNEC and an ex-oficio member from SNEC and Confederacy.There is no Confederacy appointee. Ex-oficio appointees can not vote or contribute to a quorum. SNEC has not announced the appointment of a replacement commissioner to 􀂦ll the vacancy left by member Nick Wyman who was removed by SNEC. Wyman has challenged that move.