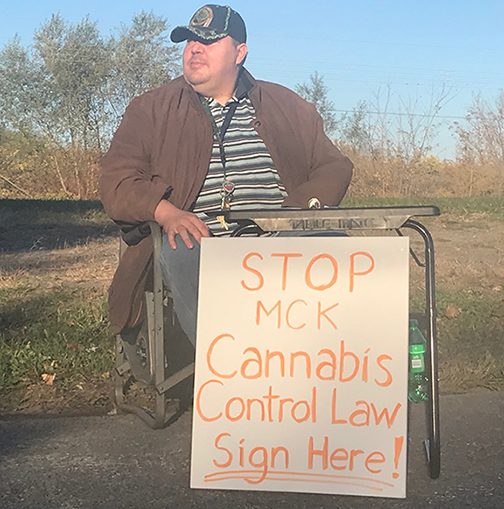 People Hope To Have Their Say On Pot

From the Eastern Door link to article by Lachlan Madill, October 29, 2018

For the past week, community members have had their chance to voice their opinions on the cannabis question in Kahnawake.

A poll with two questions has been underway at the Golden Age Club, which asks 1.) Should marijuana be allowed to be sold on the territory and 2.), If it is allowed, should it be sold for medical, recreational or both?

The poll was put together as a response to concerns that came out of the September 25 Community Decision Making-Process (CDMP) meeting.

Some community members felt there was not enough input from people in the community in making the law.

Mohawk Council chief Rhonda Kirby has been instrumental in working on the Kahnawake cannabis control law and said the process has been in the works for the past two years since the government announced its intention to legalize cannabis.

“People said that they hadn’t heard anything and that we were ramming it down their throats and we’ve been talking to the community for well over two years about the federal law,” said Kirby, speaking to THE EASTERN DOOR during the polling period at the Golden Age Club on Wednesday.

“So we agreed to go to the community again to get their thoughts.”

The cannabis control law still hasn’t been put into place in Kahnawake, which the poll is supposed to help determine.

While the federal law came into force last week across the country, a moratorium remains in place on cannabis in the territory.

Community member Jeremiah Johnson was one of those present at the September 25 CDMP meeting. He’s has been vocal about his thoughts on the process to implement the cannabis law by council. He’s not happy about it and said many others aren’t either.

Last Friday Johnson called for a community meeting about the new upcoming law. He said that around 60 community members showed up at the Moose Lodge for “the people’s meeting.”

He described it as a grassroots initiative, which represents those who are against the “tactics and process” MCK is using to make the law.

“The community came out and we expressed our concerns and we had some very serious open discussion,” said Johnson.

“We came up with a plan of action… the community needs to have a say. We’re not content sitting back and allowing MCK to dictate the laws which apply to us and the community.”

He said he’s not against regulations and agrees they need to be in place. It’s the way that council has done it that bothers him.

Johnson said that the plan of action, which came out of the meeting, was “to draft and have signed by as many community members as possible, a cease and desist order to allow council to at least recognize that there are a large number of people in the community who want a say, who demand to have a voice in the laws that apply to our territory,” said Johnson, who set up a table to gather names for a cease and desist order, outside the Golden Age Club, during the poll on Wednesday.

Johnson answered questions and signed people his document, while community members went inside the building to fill out the MCK questionnaire.

“I was told MCK had concerns about me being there, that I might intimidate people coming to vote in the poll,” said Johnson. He was also told he was “not allowed on in the building or on property to collect signatures,” he said.

The cease and desist order is to stop MCK from enacting the law until the community is properly involved and the process is transparent, which he said was flawed from the start.

“Council had a phone survey of 260 people a couple of years ago and they’re holding onto that like it’s their life raft. We can get much more than that who are opposed to this (process),” said Johnson.

“I’m in favour of the poll and the questions are reasonable… I’m not in favour of having cannabis on the reserve at all,” said one person who didn’t want to be identified on the way out of the poll.

She said that while she felt it was her duty to make her voice heard, she felt a cannabis law would likely be ineffective in the same way that tobacco couldn’t be controlled.

“I think that it’s very good that they’re doing this for us and that they’re letting us have our opinion on it,” said Wishe Delisle, who added he thought cannabis would be beneficial for the local economy.

“I just don’t like that there’s people with the negativity who come here and always look at the cons before the pros. Look at the big picture it’s not just about one person, it’s for the community.”

Back inside the Golden Age club, Kirby said she was happy with the community participation and expected the number of people coming to increase towards the end of the week.

The poll has also been extended to Saturday to accommodate out of town workers at the Service Complex from 9 a.m.- 1 p.m., as well as at the Golden Age club from 9 a.m.- 4 p.m.

As for the opposition in the community to the process, Kirby said she was aware of Johnson’s cease and desist petition.

“It takes a little bit more than a just letter and I don’t know how many people he’s getting,” she said, as she looked out the window at Johnson.

At his table, Johnson spoke enthusiastically with other community members who stopped by to sign up and to encourage him.

He said he hoped to get several hundred signatures over the next week. After he gets all his names, Johnson said he’d submit the cease and desist to council.

He said they would have no choice, other than to abide by it.

“The council only wields the power that the community allows them to wield, and when the people decide that they’ve overstepped their bounds, we will put a stop to it,” he said.

Kirby said the community members have already had their chance to speak.

“We’re past that stage and we’re at the final stages of drafting this new law,” she said.

“We’re not going to backwards because certain individuals want the right to do what they want. We’re looking at controlling the industry and making it beneficial to the community.”

Published in Kahnawake, Mohawk Council of Kahnawake, News and Reprint