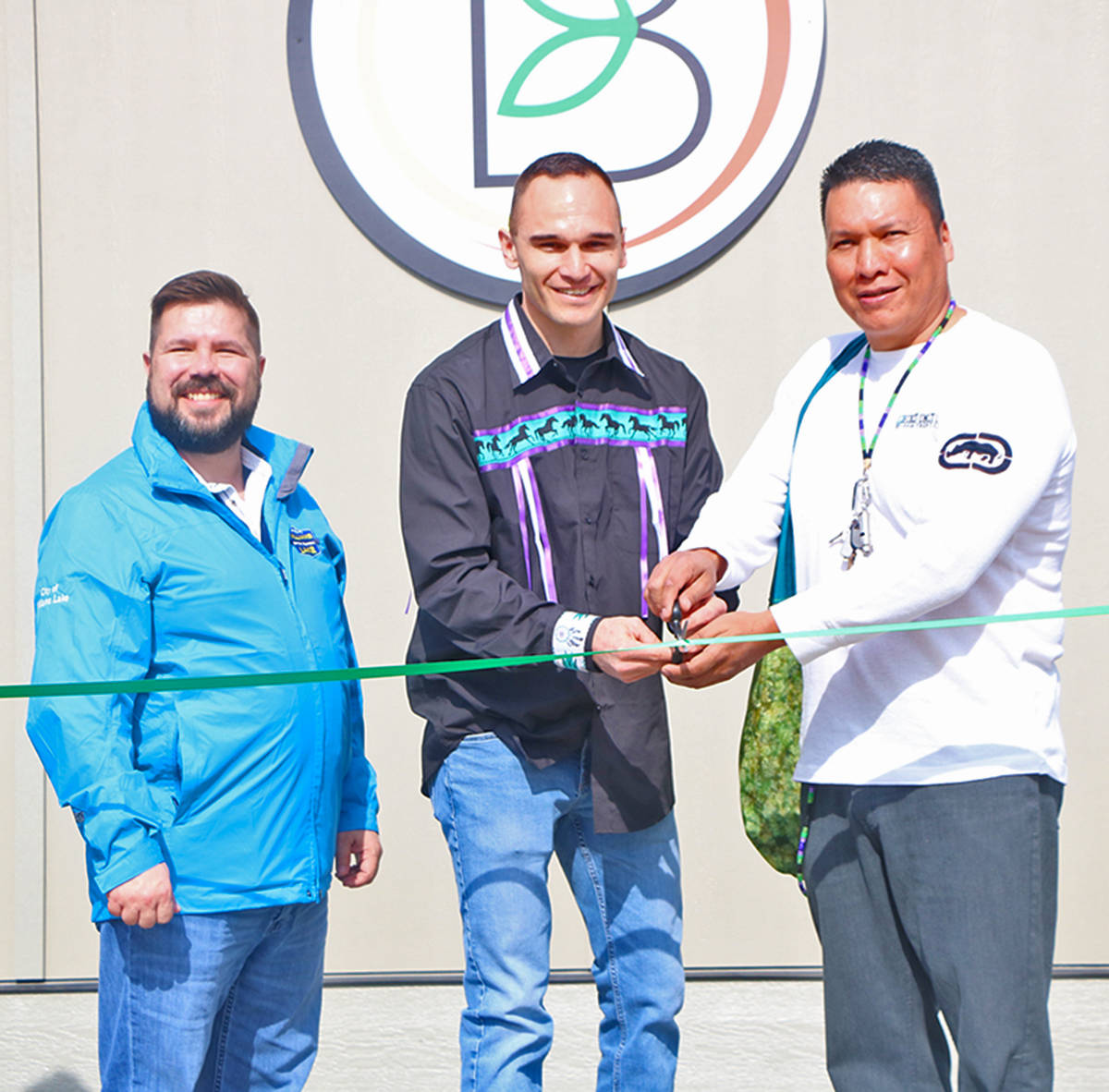 From wltribune.com link to article by PATRICK DAVIES Mar. 28, 2019

Cannabis was legalized across Canada last October, and while many local applications are awaiting license approval from the provincial government, the opening of Indigenous Bloom occurred on reserve land and in accordance with band law.

Indigenous Bloom and the WLIB could not have asked for a better day to hold their ribbon cutting ceremony Saturday. Dozens of people came out to browse the store’s wares, show their support and enjoy some bannock on a bright sunny day.

Chief Willie Sellars was excited to officially open the store and to start to “blaze a trail” for both Indigenous enterprise and diversifying the economy. Sellars said taking steps to move away from reliance solely on resource-based industries, such as forestry and mining, is important for the long-term economic growth and prosperity of the WLIB and the City of Williams Lake.

“It’s through initiatives like this and partnerships we’ve created with Indigenous Bloom, the City of Williams Lake, the Cariboo Regional District and other dignitaries who spoke [Saturday] that are going to change the game in Williams Lake. It’s starting to build those relationships between non-Indigenous and Indigenous people,” Sellar said.

He extended thanks to the City of Williams Lake, the CRD and MLA Donna Barnett for their support from the start of the project three months ago and said the WLIB couldn’t be more excited by the turnout for the grand opening. Sellars also credited the staff at the WLIB for making it all possible.

WLIB’s Indigenous Bloom currently employs 11 full-time staff members, though Sellars sees this number only growing in the future. He indicated the WLIB has plans to open another retail store in the future and will definitely look into moving into the growing side of Canada’s emerging cannabis industry.

The store sells buds, tinctures, edibles, oils and shatter in addition to various other cannabis-based products and paraphernalia. Throughout the opening people of all ages and backgrounds were perusing the store’s wares, many exclusive to Indigenous Bloom until legislation is passed outside of tribal government jurisdiction.

“You can see that people were starving for the product, starving for the city of Williams Lake to open something up and just because we’re the first definitely does not mean we’re going to be the last,” Sellars said.

Sellars, with a smile, ruefully recalled first bringing up a cannabis dispensary years ago at a WLIB council meeting. Then Chief Ann Louie gave him a “ribbing” over it and yet now it is a reality. Louie, Sellars said, was instrumental in pushing this initiative forward and said he couldn’t have asked for a better mentor.

“It was tough but in the end the pros far outweigh the cons in this instance. What we’re going to be able to do with the revenue generated from this business (is fund) recreational programs, social programming, drug awareness and scholarship bursaries. These are the things we are targeting and those are the things the community is supporting,” Sellars listed.

In Sellars’ eyes, the opening of the stores is just one of the ways the community can implement “reconciliaction” and make positive changes moving forward.

Several dignitaries from Indigenous Bloom, the City of Williams Lake, the CRD, and other native groups spoke prior to the ribbon-cutting ceremony. All mentioned the hope and opportunities the opening of the outlet provides both the residents of Sugar Cane and Williams Lake.

MLA Barnett congratulated the WLIB for ongoing efforts to create employment and opportunities for their people.

“They are open, they are honest and they’re willing to work with every single person, business and industry and I know they’re going to have great success here and in all their future endeavours,” Barnett said.

Representing the city of Williams Lake at the event were Councillors Craig Smith, Marnie Brenner and Jason Ryll, who shared a few words on behalf of the city.

Ryll thanked the WLIB for their corporate investment into the local economy and creating stability for the area.

“We have a saying going around council right now, ‘a rising tide floats all boats,’ and that couldn’t be more true when it comes to business investments in our community,” Ryll said.

“That rising tide and business investment is only going to continue to help Williams Lake grow and prosper for all our communities.”

Indigenous Bloom Chair Robert Louie presented Sellars with an eagle feather representing strength and power alongside a message of empowerment and support for WLIB.

Louie said the company wishes to see all Indigenous peoples across Canada prosper and have the opportunity to take part in economic development projects like the new store.