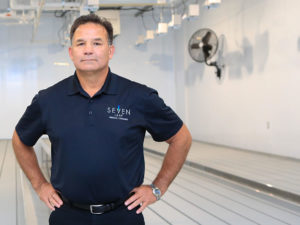 From mjbizdaily.com Link to article
Published March 10, 2019 | By Matt Lamers

One of six licensed cannabis producers in Canada with indigenous ties is aiming to take its products to market by June.

Akwesasne, Ontario-based Seven Leaf – which is also the first fully indigenous-owned and -operated licensed producer – is in the process of growing its first harvest for Health Canada approval.

CEO Lewis Mitchell told Marijuana Business Daily the company is planning to capitalize on both the medical and recreational markets.

“When we began the long process to become a licensed producer, the only option for us was to grow and sell medical cannabis, and that was our only intention,” he said.“The legalization of recreational cannabis in late 2018 creates additional business opportunities, most of which are still under development.”

Seven Leaf has been in contact with the Ontario Cannabis Store (OCS) and the Société Québécoise du Cannabis (SQC), wholesalers of adult-use cannabis in Canada’s two largest provinces.

“We have options and haven’t settled on any one,” Mitchell said. “The plan is, once we receive our sales license, we’ll look at all our options to see where we can reap the best price for our products.

“We’ve had discussions with a couple of LPs to discuss streaming contracts.”

Seven Leaf plans to triple the size of its indoor production facility in Akwesasne this year to 85,000 square feet. An expansion to 180,000 square feet is in the works, with an estimated annual production capacity of 48,000 kilograms (105,800 pounds).

The company received its cultivation license in September.

Some indigenous leaders have been critical of Canada’s legalization process, saying indigenous-owned businesses were disadvantaged because the federal government failed to adequately consult with First Nations communities.

Five other licensed producers in Canada – out of roughly 150 companies – have identified affiliations, including financial or other partnerships, with indigenous communities or organizations, according to Health Canada.

Of the approximately 850 applicants in the regulatory pipeline, 48 have identified indigenous affiliations, according to the health department’s latest figures.

Health Canada said the first licence under the new Cannabis Act was issued to BeeHigh Vital Elements Inc. in Corner Brook, Newfoundland and Labrador, in November 2018.

Seven Leaf says 90% of its employees are indigenous.

Upon receiving an application, a licensing professional reaches out to offer assistance and answer questions regarding the process.

“We welcomed the First Nations-dedicated resource in early 2018,” Mitchell said.

“While Seven Leaf had made a lot of progress on our own to that point, it was helpful to have someone inform us of what the next steps were and to provide information on the progress of our application.

“Until then, it was difficult to learn where we stood and to anticipate next steps.”

Matt Lamers can be reached at mattl@mjbizdaily.com