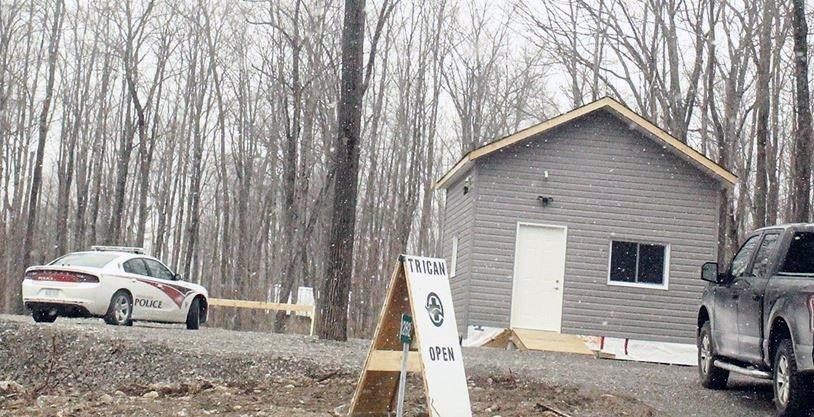 From mykawartha.com link to article by Todd Vandonk Sept 25th 2018

A lone Anishinabek Police Service car sits outside Trican medicinal marijuana shop at Curve Lake First Nation after it was served with a search warrant and one employee was arrested on Friday, April 6, 2018. – ANGELA LAVALLEE photo

Tammy Banks will pay a hefty fine for selling marijuana.

Banks, 45, was busted by Anishinabek Police Service (APS) 11 days after opening a medical marijuana dispensary in Curve Lake, in February 2018. Community police raided TRICAN at 1262 Mississauga Rd. on March 8 and charged the store owner and her son with several trafficking charges.

Banks pleaded guilty to trafficking marijuana and was sentenced by Justice Stuart Konyer in Peterborough provincial court on Sept. 4, 2018.

After the March raid, the dispensary reopened within weeks but was once again shut down by police.

When the store opened in late February, Banks said she felt confident she was not violating any laws, even though legal marijuana sales were not scheduled to begin until July 1 (that was later delayed and marijuana won’t be legal until late October).

“Technically, they (police) can and come and shut us down, but I’ve made sure the lines of communication were and are kept open,” she said at the time.

After closing the dispensary for a second time, APS Insp. Barry Petahtegoose issued a statement.

“APS has not allowed TRICAN to reopen and we will enforce the law when this type of business opens up,” he said in an email.