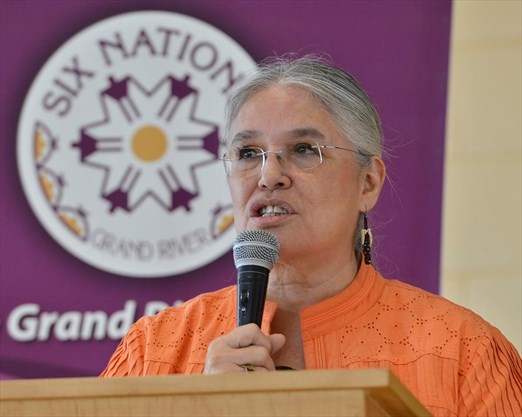 “The days of them sitting and telling us this is how it’s going to be need to end,” Chief Ava Hill says about her community’s autonomy.

From The Hamilton Spectator link to article
by Teviah Moro Aug 31, 2018

Green Health for Six cannabis dispensary owner Jeff Hawk(right) and manager Aaron Sault in their shop on Six Nations.Hawk launched a survey about cannabis use and is seeking more responses to the 2,300 copies already mailed out. “I’m trying to get people’s input to show that we have a want or a need in this communityÉ,” Hawk says.Photo by Scott Gardner, The Hamilton Spectator – Scott Gardner , The Hamilton Spectator

OHSWEKEN — Six Nations is drafting its own cannabis law rather than wait for outside governments to impose regulations.

“Our main concern is the health and safety of our community, particularly the young people,” elected Chief Ava Hill said.

The most populous First Nation in Canada also sees the potential economic benefits of legalization.

“We have to start developing our own source revenue,” Hill said. “If this is one avenue to do that, that’s one avenue we want to explore.”

But Hill and other Indigenous leaders say they has been excluded from the national discussion on legalization.

“It seems that again we’ve been left out in the dark with all the stuff that’s going on, and we’ve become a footnote.”

In June, Parliament passed Bill C-45, the Cannabis Act, which leaves it up to provinces to decide the nitty gritty about distribution and sales.

Ottawa will bank 25 per cent of cannabis tax revenue while the provinces and territories will receive 75 per cent. The total is estimated to be roughly $400 million annually in early years.

But with the clock ticking away to legalization day on Oct. 17, much is left up in the air for First Nations, who have called on Ottawa to slow down the pace.

Indigenous communities have no revenue-sharing arrangement with Ottawa, no word on taxation and nothing definitive on self-regulation.

There’s a lot at stake. With autonomy comes the ability to generate economic benefits and look out for public health and safety.

Indigenous leaders argue cannabis production, distribution and sales are elements of self-determination, a right of First Nations written in the Constitution.

“The federal and provincial governments must recognize and respect First Nations sovereignty and jurisdiction over their reserves and traditional territories,” an Assembly of First Nations resolution said about cannabis in June.

As well, the Chiefs of Ontario wrote Senators still mulling Bill C-45 in June that Ottawa had “failed to involve First Nations” and the legislation “must respect” their jurisdictions.

Recent statements from Ottawa to The Spectator suggest this is a work in progress — albeit after the passage of Bill C-45.

The Department of Finance says it’s “committed to ensuring” tax arrangements that “are consistent with the principles underlying reconciliation and a renewed fiscal relationship.”

Meanwhile, the Department of Justice is “committed to continued engagement and work … to address and accommodate jurisdictional issues in an appropriate way going forward.”

Health Canada says it has consulted widely with First Nations on legalization and “recognizes the importance of ongoing engagement.”

Moreover, the ministers of health and Indigenous services have promised a Senate standing committee that critiqued Bill C-45 they would provide a progress report on “action areas” by June 2019. An official response to the Senators’ May 2018 report will also be tabled in the House by Sept. 30, 2018.

But like Six Nations, other Indigenous governments are forging ahead with cannabis regulations tailored to their needs.

Hill says her community, which is on the banks of the Grand River near Brantford, doesn’t plan to wait for Premier Doug Ford’s new Progressive Conservatives to dictate the terms.

“The days of them sitting and telling us this is how it’s going to be need to end.”

Hill said the draft regulations for cannabis use, sales and distribution still require research and input from community members.

Council is also considering proposals from the private sector for commercial aspects of the industry, the chief has noted.

First Nations across Canada are taking varied approaches to cannabis. Some are mulling minimum age requirements for use that clash with provincial regulations. Others are saying no legal weed outright, much like dry reserves have outlawed alcohol.

Top of mind are the potential costs that come with legalized pot for vulnerable communities.

“I believe we have many issues to deal with and this will add to social impacts,” said Chief Stacey Laforme of the Mississaugas of the New Credit First Nation, which borders Six Nations.

“I realize that it can provide economic opportunity, but I am concerned that social issues will outweigh economic activity,” Laforme told The Spectator in an email.

Donald Maracle, chief of the Tyendinaga Mohawk Territory near Belleville, said a will be price attached to addiction services and enforcement of regulations.

“There is no revenue sharing with First Nations, even though they’re going to be heavily impacted by that.”

In Ontario, the Ford government is limiting weed vending to online sales through the Ontario Cannabis Store’s website starting Oct. 17, with private dispensaries joining the market by April 1, 2019.

This is a departure from the ousted Kathleen Wynne Liberals, who planned to roll out 150 brick-and-mortar Ontario Cannabis Stores by 2020 but no private outlets.

“The law is changing,” Maracle said. “And yet Premier Ford’s government has not said anything about First Nations and how they’re going to deal with that.”

In an email to The Spectator, a spokesperson for Ontario’s Ministry of the Attorney General said the province’s Cannabis Act will apply to reserves.

“However, some First Nations may wish to develop their own approaches to cannabis, and as a result the Act contains authority for the Attorney General to enter into agreements with First Nations communities related to cannabis regulation,” Brian Gray wrote.

In Ohsweken, Jeff Hawk isn’t holding his breath about what the future may hold for his shuttered Highway 54 dispensary.

“I’m just going to be shut down either way.”

Police have raided Green Health for Six twice in less than a year of operation. Hawk is facing drug charges as a result.

He predicts whatever emerges from the band office will lay the groundwork for larger players, much like what happened with tobacco.

“All the little shops like myself were just starved out by the bigger guys,” said Hawk, who used to operate a tobacco business.

(Small smoke shops dot the landscape in Six Nations, but the industry is dominated by Grand River Enterprises, a massive tobacco manufacturer and global distributor.)

Hawk doesn’t recognize the elected band council, which he sees as an extension of the colonizing federal government. It is a view that’s shared by other Indigenous people in Canada.

The “orthodox legal answer” is that provincial cannabis laws apply to reserves under the Indian Act despite the Constitution Act (1867) deeming them federal jurisdiction.

And while a section of the Constitution Act (1982) protects “existing Aboriginal and treaty rights,” the courts have “interpreted ‘Aboriginal rights’ in a relatively narrow manner,” Walters said.

He offers this analysis in the context of Nova Scotia, where MLAs have opted for a retail model strictly operated by the provincial liquor corporation.

Mi’kmaq communities there are vying to sell directly to consumers, nonetheless.

That case, Walters says, suggests provinces and the federal government “may have to adjust their approach … if they are really serious about their commitment to the aspiration of reconciliation and of respecting a nation-to-nation relationship with Indigenous peoples in Canada.”

For Jamie Kunkel, who operates Smoke Signals in Tyendinaga Mohawk Territory, there is no debate.

Kunkel says he has four dispensaries in Ontario, Quebec and British Columbia. Smoke Signals is among roughly 30 pot shops in Tyendinaga, which is near Belleville.

Unlike Hawk’s experience with police in Six Nations, Kunkel said he hasn’t been busted.

In fact, Smoke Signals hosted nearly 60 vendors over four days at its first Indigenous Cannabis Cup in May.

Police were there, but only to direct traffic, Kunkel said. “The thousands of people that were here were amazed …”

Kunkel, who has been in the cannabis business for 25 years, said the plant’s use comes naturally for Indigenous people.

“It grows on Mother Nature’s back. It’s given to us from Mother Earth.”

In Tyendinaga, there has been a critical mass of dispensaries that pushed the cause forward, he said.

“It’s very evident that the community for the most part agree with this.”

Maracle has a different view, saying the community is “certainly not unanimous” on the pot shops. But most can live this, as long as it’s regulated, he adds.

“That doesn’t mean provincial control,” Maracle is certain to clarify.