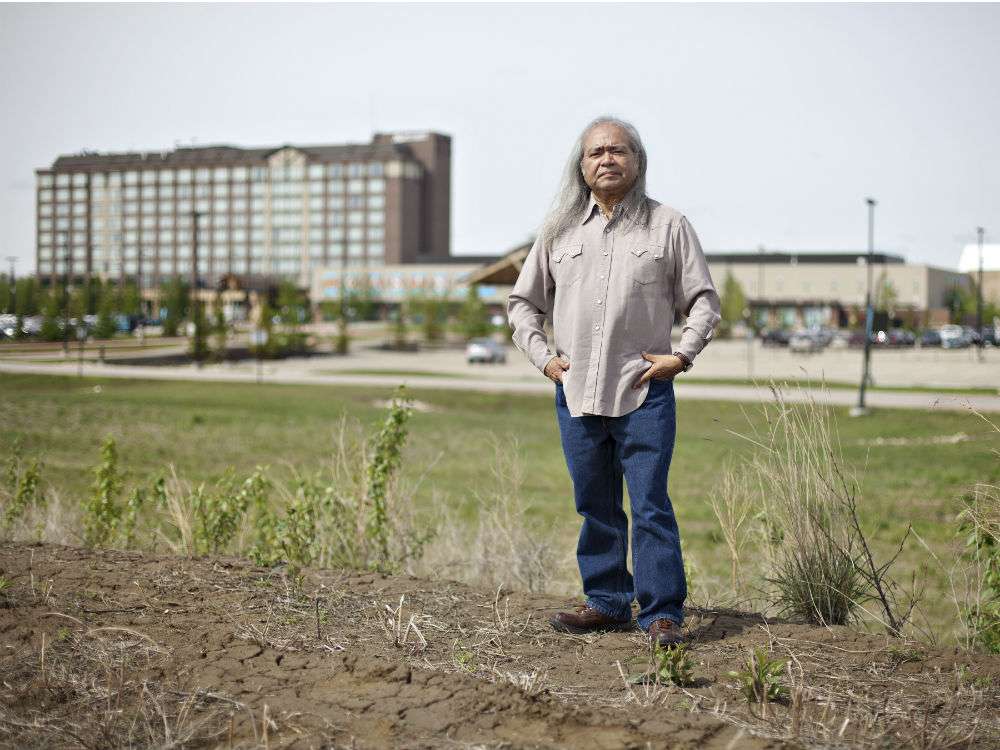 From nationalpost.com link to article by Maura Forrest, June 15, 2018

OTTAWA — In the heart of Alberta’s oil sands, there’s a new opportunity on the horizon, one that isn’t at the mercy of oil prices and pipeline politics.

The Fort McMurray #468 First Nation hopes to open a new marijuana production facility next year on its land south of the city, in partnership with cannabis company RavenQuest BioMed. The operation could eventually produce 15,000 kilograms of cannabis a year, estimates Brad Callihoo, the First Nation’s CEO.

“My mandate is a self-sufficient nation for the next seven generations,” he said.

Fort McMurray #468 has 805 members, 368 of whom live on reserve. Callihoo said the First Nation has depended heavily on Alberta’s oil and gas industry for its economic wellbeing, but legal marijuana presents an alternative.

Like Fort McMurray #468, many Indigenous communities across Canada are keen to cash in on Prime Minister Justin Trudeau’s promise to legalize recreational marijuana this year, by producing or selling legal weed. Some First Nations groups are even calling for a cut of the lucrative excise tax. But alongside those touting the economic benefits of legalization, some Indigenous leaders are ringing alarm bells about the impact legal cannabis could have in under-resourced communities struggling with poverty and substance abuse. They want to ensure Indigenous communities have the option to ban or restrict marijuana on reserves, as they can alcohol, along with the opportunity to grow and sell it.

Exactly what legal weed will mean for Indigenous communities is still unclear, but already Bill C-45 is testing whether Trudeau can make good on one signature promise, to legalize cannabis, without losing ground on another — advancing reconciliation.

The senators ultimately decided to support the bill, but only after Indigenous Services Minister Jane Philpott and Health Minister Ginette Petitpas Taylor sent them a letter mere hours before debate was set to begin. They promised to continue consultation with Indigenous communities, to fund mental health and addictions treatment, to address concerns around the ability of First Nations to regulate cannabis on reserves, and to continue discussions around revenue sharing and taxation. They pledged that the government will report back to Parliament on its progress within a year of legalization.

It was enough, at least for the time being. Independent Sen. Mary Jane McCallum said she would support the bill despite what she called a “drive-by consultation” with Indigenous peoples. And at the last minute, Conservative Sen. Dennis Patterson decided not to proceed with an amendment to delay the bill.

“Ultimately (I) decided that I would go along with my colleagues on the Aboriginal Peoples committee and hold the ministers to account in the days ahead,” he said.

Still, fears about the impacts of cannabis legalization in Indigenous communities persist. In Nunavut, the territory Patterson represents, there are no addiction treatment centres, and the senator said his concerns have not been allayed by a “vague promise of increased funding” for mental health and addiction services in the ministers’ letter.

Patterson said it’s almost impossible to grow marijuana in Nunavut, meaning the territory will have to face the risks of legal weed without reaping the rewards. “We can’t even get greenhouses going yet for fruits and vegetables,” he said.

According to Carol Hopkins, executive director of the National Native Addictions Partnership Foundation, 89 per cent of Indigenous youth entering substance abuse treatment centres in Canada list cannabis as the number one substance used. In an appearance before the Senate Aboriginal Peoples committee earlier this year, she cited data from the First Nations Information Governance Centre showing that at least 32 per cent of First Nations people had used cannabis in the previous year. A 2017 Health Canada survey of the general population estimated the rate at 18 per cent of respondents aged 25 and older.

“The way I would put it is that it would be subject to challenge and it would be up to the courts to determine the relationship between the existing Indian Act provisions and the cannabis legislation,” Stefan Matiation, director and general counsel for Justice Canada, told the Aboriginal Peoples committee in April.

Some Indigenous leaders are also saying the government must take action to prevent a contraband cannabis market from taking hold on reserves, as has happened with tobacco in parts of Ontario and Quebec. Contraband tobacco sales cost Canadian governments billions in lost tax revenue, with one 2017 survey estimating that 32 per cent of cigarettes sold in Ontario in the last quarter of 2016 were contraband. Many on-reserve smoke shacks sell tax-free cigarettes to any customer, though they are supposed to collect taxes from anyone who isn’t a status Indian.

Manny Jules, chief commissioner of the First Nations Tax Commission, is calling on the government to share some cannabis tax revenue directly with First Nations, to head off “grey-market” marijuana. As it stands, Ottawa has agreed that the revenue will be split 75-25 between the provinces and the federal government.

“If these guys say we’re a government, then we’ve got to be treated like that,” Jules said.

The idea isn’t unprecedented. Some provinces have tobacco tax-sharing arrangements with certain First Nations, whereby provincial excise taxes are reimbursed to communities from sales to non-Indigenous customers. The idea is to create an incentive for retailers to operate legally, while providing a revenue stream to the community.

First Nations need the revenue to help develop their own cannabis regulations, Jules said, which is necessary to prevent “grey marketeers” from selling marijuana like contraband tobacco. “In a lot of communities, that has led to billions of dollars of lost revenue through the cigarette and liquor trades,” he said.

Jules said the ministers’ letter to the Indigenous senators, which says the government is committed to a new fiscal relationship with Indigenous communities, is probably the “best-case scenario” for ensuring the government will take his proposal seriously.

“I knew that we couldn’t literally stop the legislation from being passed by the end of the session,” he said.

It’s difficult to know how many First Nations are looking to legal weed as a source of economic development. Health Canada says there are five licensed producers and 14 applicants with Indigenous affiliations. But Aaron Sonshine, a lawyer and co-head of the cannabis group at Bennett Jones, said many Indigenous groups are engaging directly with cannabis companies that are already licensed. Some of his clients, he said, have as many as 30 or 40 Indigenous communities as stakeholders.

“There’s actually been a fair bit of cooperation that may not be as visible to (Health Canada),” he said.

This bill represents a potential economic powerhouse for First Nations… but it casts a long and threatening shadow on an element of Canadian society already ravaged by unmitigated poverty, … drug dependency and epidemic rates of suicide

Howard Morry, legal counsel for IndigiCo, a company led by former Assembly of First Nations National Chief Phil Fontaine that aims to build a cannabis facility in Armstrong, B.C., said the government needs to do more to “level the playing field for First Nations.” IndigiCo suggested to the Aboriginal Peoples committee that 20 per cent of production licences should be set aside for Indigenous communities, an amendment that was defeated in the Senate last week. Morry said he’s still hopeful the issue will be raised again and perhaps “dealt with in some other way.”

But he said not all First Nations will look to benefit from legal marijuana by building facilities on their own land, as Fort McMurray #468 plans to do. “It’s not realistic, especially in tiny communities or in remote communities,” he said. Instead, he believes many will invest in or co-own facilities that could be far from their reserves.

Still, there’s uncertainty about the autonomy Indigenous communities will have when it comes to selling and regulating cannabis, prompting some to call for more clarity in federal and provincial legislation. Bill Robinson, head of government and Indigenous relations for RavenQuest, told the Senate committee in February he was hearing “great confusion” from First Nations about their jurisdiction under the new laws.

Much of the responsibility for regulating the sale and consumption of cannabis rests with the provinces rather than the federal government. In a statement, the Ontario ministry of the attorney general said that the province’s cannabis laws allow the finance minister “to enter into community-specific agreements with First Nations band councils with respect to cannabis that is sold on reserve.”

But there remains enough confusion that the Assembly of First Nations in May passed a resolution calling on the federal government to amend Bill C-45 to “recognize and respect First Nations sovereignty and jurisdiction over their reserves and traditional territories.”

In their letter, Philpott and Petitpas Taylor promised to “address and accommodate jurisdictional issues.”

Last week, as the Indigenous senators announced they would support the bill thanks to the government’s reassurances, some were still of two minds.

“This bill represents one of the greatest paradoxes I’ve encountered in my legislative time here,” Independent Sen. Daniel Christmas said last Wednesday in the Senate. “This bill represents a potential economic powerhouse for First Nations… but it casts a long and threatening shadow on an element of Canadian society already ravaged by unmitigated poverty, … drug dependency and epidemic rates of suicide.”

Still, he urged his colleagues to “not become the enemies of change,” in spite of their concerns about legalization. “We want to ensure we leave no one, or no community, behind.”