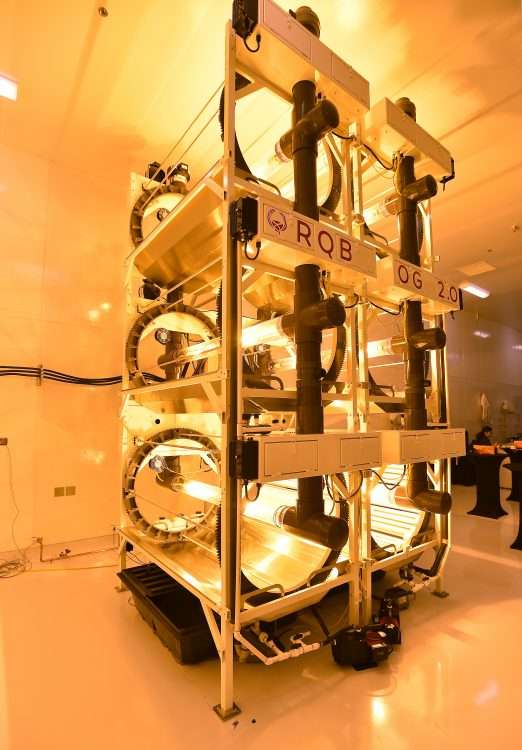 From Edmonton Sun link to article by
Hina Alam, July 9 2018

A cannabis company unveiled what it described as state-of-the-art cannabis production technology.

RavenQuest BioMed Inc. unveiled its “Orbital Garden technology — OG 2.0,” a design where hollow drum-like equipment is stacked three high and two wide, thereby allowing for 500 square feet of growing space inside a 64-square-foot footprint. The technology was unveiled Monday at the 45,000-square-foot facility, which is still being completed at 164 Street and 132 Avenue.

“(This technology) provides an opportunity to get higher yield with less electricity use, less water and less nutrients,” said George Robinson, CEO of RavenQuest.

“It provides more square footage in a room than a traditional flat table.”

The facility, overall, has a capacity to produce 7,000 kilograms of cannabis per year and generate $48 million in revenue annually.

The growing cycle for the plants is about eight weeks before they are harvested, processed and shipped.

Robinson said he is hoping to have the licence to cultivate in the next three to four weeks and be fully operational by November. The cost of the facility is about $14 million.

Robinson said the company is looking to expand further over the next three years and have facilities across Canada.

A similar 250,000-square-foot facility is planned at the Fort McMurray First Nation and is expected to produce 50,000 kg of cannabis annually.

Robinson said cannabis entered the market in Edmonton just when the oil and gas industry went down. But the skills from the oilpatch are fairly transferable and being put to good use in building high-end facilities. The industry also employs a number of plant technicians and scientists.

RavenQuest is also looking to have a 4,500-square-foot retail outlet at 103 Street and Jasper Avenue.

Published in News, RavenQuest and Reprint