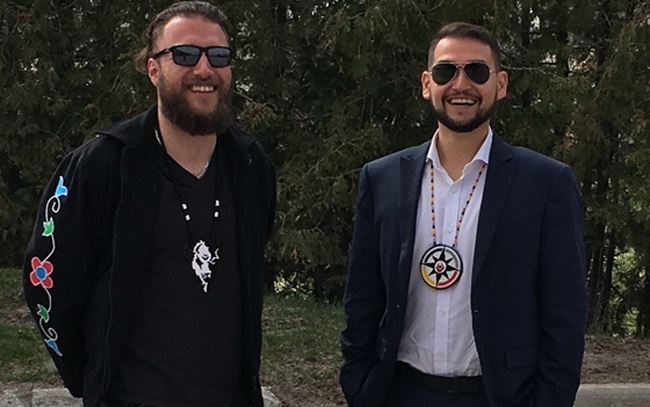 From anishinabeknews.ca link to article by Rick Garrick, April 28th 2017

“Three years ago, we saw that medical marijuana will be a huge economic driving force in the Canadian economy and we saw this as an opportunity for wealth creation for our communities by unifying First Nations with top emerging companies into equity partnership relations,” says Araujo, a Wikwemikong citizen. “Secondly, we got into drone technologies and currently, we are working on developing pilot projects in remote First Nation communities to deliver medical supplies that otherwise would require a pilot and a plane to ship. We were driven to this idea from a young woman who passed away because she could not receive specific medicines in time. Currently, we are working to be granted a federal aviation license for commercial drone delivery operations.”

Taylor, a Curve Lake citizen, and Araujo established the Pontiac Group to collectivize First Nation communities for the purpose of wealth creation and human capital development. It is a socioeconomic development firm that supports partnership opportunities on-reserve through capacity building, access to capital, and sustainable economic opportunities.

“We built Pontiac Group to build wealth within our nations so that they may look after their people as they need to,” Taylor says. “We chose Pontiac for being Anishinaabe, for being Odawa, for being otter clan, but also for being a person who collectivized First Nations, got people to start working together. Our whole aim of our company is to bring First Nations together for nation development.”

“The medical cannabis investment has already doubled for our communities that have gotten involved,” Taylor says. “We’ve instituted several leadership and executive policy manuals which have assisted in the separation of politics and administration.”

“Now we are in the midst of building five more facilities across the country with First Nation partnerships,” Araujo says. “Within the next five years, this will be a significant economic driving factor in our country that First Nations will be a part of the infancy and the development and the growth of.”

Taylor says the traditional Anishinaabe understanding is that every plant has a healing purpose.

“So the company that we selected, which will be the leading company in the country, is a pharmaceutical-based facility and has focused on the medical aspect to the plant’s consumption,” Taylor says. “For us, that is something that Indigenous people can all get behind. We’ve been collectivizing about 24 communities to come together in this opportunity.”

Araujo says the Pontiac Group was developed according to the Eighth Fire prophecy.

“We operate all of our business affairs according to the Seven Grandfather Teachings,” Araujo says. “It is the spiritual component that drives us and gives us the cutting edge.”