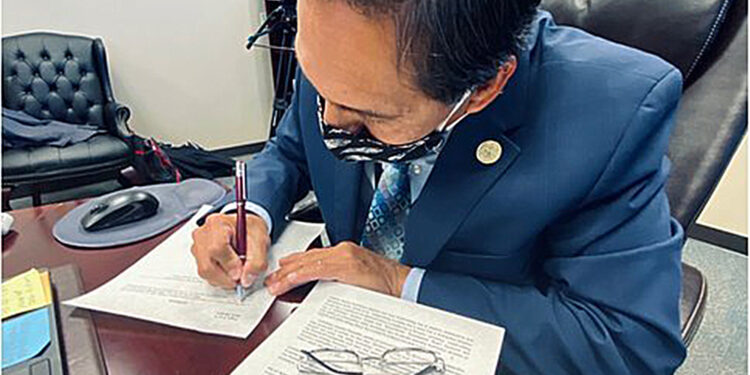 OKMULGEE, Oklahoma — The Muscogee (Creek) Nation considered and unanimously passed traffic laws that would update the tribe’s criminal and traffic codes in order to close gaps between tribal codes and those administered by the state of Oklahoma since the United States Supreme Court issued its decision affirming the MCN Reservation status.

According to a statement from the Office of Principal Chief, ‘This action in lawmaking is credited to the Mvskoke Reservation Preservation Commission’s recommendation to provide clarity and eliminate uncertainty as to whether the Nation will enforce any criminal law against anyone who possesses a valid medical marijuana license.’

One of the criminal code updates considered by the MCN National Council was the application and limitations of Medical Marijuana.

“This is an excellent example of the Nation exercising its sovereignty to amend its criminal law to address public safety issues in the Mvskoke Reservation,” Principal Chief David Hill said. “Furthermore, this is a pro-business action by the Commission and commitment to individuals and entities licensed in medical marijuana endeavors throughout the reservation.”

In 2018, Medical Marijuana was legalized under State law when voters approved Oklahoma State Question 788 or “Medical Marijuana Legalization Initiative.” This initiative created mechanisms for oversight of medical use licenses as well as commercial and non-commercial regulation of the substance.

However, under the tribe’s older statutes Medical Marijuana was still defined as a controlled substance. This created a gap in the law for tribal citizens, and businesses associated with Medical Marijuana. Without an update to the tribe’s criminal code, many individuals and businesses located on the MCN Reservation who were compliant with state law could have been subject to criminal prosecution under the Nation’s law.

The council unanimously approved NCA 20-083, after recommendations of the Mvskoke Reservation Protection Commission made a recommendation for the law. According to the legislation language the law is meant to serve as an immediate solution to provide clarity as to whether the MCN will enforce any criminal law against those possess a valid license, and are in compliance with the licensure to use or produce Medical Marijuana.

Documents said that ‘the commission will continue to analyze the Medical Marijuana issue to develop in-depth and long-term recommendations to the National Council that will identify possible regulatory and taxation authority, as well as economic development opportunities in the field of Medical Marijuana.’

The legislation said that classification of “Controlled and dangerous substance,” referenced in the code will not apply to marijuana in any form that is grown, processed, dispensed, tested, possessed or used by any person in the Nation’s Indian who has been issued a Medical Marijuana license by the Oklahoma State Department of Health, as long as such person is in compliance with all Medical Marijuana license laws and regulations under Oklahoma State law and any other applicable law of the Nation.

Those tribal citizens who use the substance as medicine, produce, transport, grow or dispense must be compliant with all regulations under Oklahoma State law to avoid prosecution.

Citizens of the tribe who work for the Muscogee (Creek) Nation still need to refer to the employee handbook in order to remain compliant with employment policy. The law is not effective until Principal Chief David Hill has signed it.

The executive release said that there could be future updates to the code.

‘The Commission will continue to analyze the medical marijuana issue to develop in-depth and long-term recommendations to the National Council that will identify possible regulatory and taxation authority, as well as economic development opportunities concerning medical marijuana,’ the release said.