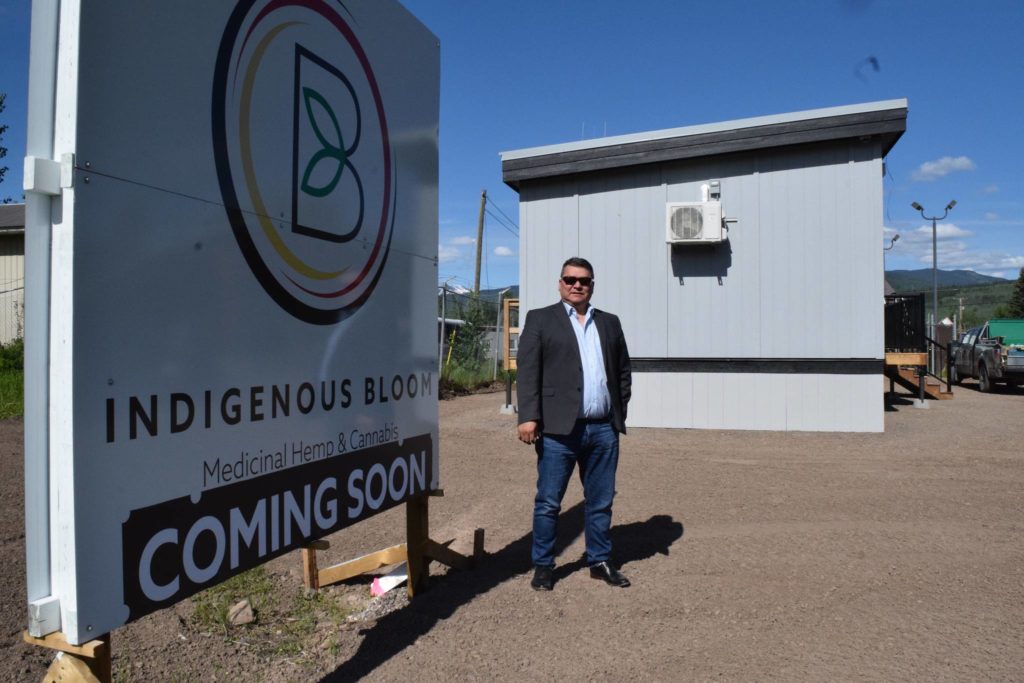 If all goes to plan, Kyah Development Corporation CEO Trevor Morrison hopes Indigenous Bloom’s new dispensary in Witset could be the seed that helps the village grow.

More recently, the modular unit the dispensary will run out of arrived in Witset on June 12, with employees hard at work getting it in tip-top shape.

Morrison said the shop, which will operate outside federal and provincial regulatory frameworks, is set for a soft opening during the fourth week of June, with tentative plans for an official opening to the general public on July 3.

Indigenous Bloom a cooperative of Indigenous people across B.C. The company consolidates long-term partnerships with First Nations in the province for the production of cannabis products on their territories.

In terms of Witset getting a dispensary, Morrison said the idea goes back before he was hired as CEO in September 2019 but that the band council, knowing he had an existing relationship with Indigenous Bloom, waited until he began to really get development started.

The businessman has a background in accounting and served as an accountant for the Gitxsan nation for some 21 years.

He said after introducing the two parties a series of conversations took place, adding it was extremely important to band council that an informed decision was made and all their questions and concerns were addressed before moving forward.

And while the dispensary is the first step, Morrison said if all goes to plan it won’t be the last.

That’s because the Village is also trying to secure approval for a local cannabis cultivation facility.

Morrison said there is a possibility the facility will run out of the Kyahwood Forest Products mill, but that based on rigorous health and safety restrictions it’s possible a brand new building will have to be built.

Either way, it’s a step he is adamant about taking.

“That’ll be the next step [and] it could be over the next year, year and a half when we’ll have that facility up.”

He estimates the dispensary will employ ten individuals, while a hypothetical cultivation facility could employ up to 14.

But on top of the immediate employment opportunities created by the business Morrison is hoping that it creates even more retail investment into the area.

“What we want is a commercial hub here with a grocery store, with a bank, with an insurance company, with all the amenities,” he said, noting the number of elders who live in the community and are especially susceptible to the current situation. “Especially with this COVID pandemic, there’s a risk with community members going to Smithers and going elsewhere to do their shopping.”

He said he is hopeful they are able to make their planned July 3 opening.

“The one thing that may delay us is the hydro connection,” he said. “They’re a little backed up because of the COVID pandemic, so we hope that they will prioritize us to open our store.”

As for the community? Morrison said the resounding message he has heard is one of excitement, noting the dispensary will be one of the first Indigenous-owned cannabis stores within the region.

He said he hopes the move inspires others to take autonomy of a growing industry that many First Nations across the country have used to bring newfound capital and employment into their communities.

In addition, Morrison also pointed to the risks associated with buying cannabis through the black market.

“There’s so many risks with drugs being laced with different high-risk chemicals and we have a saver alternative here,” he said.

“We hope we set the standard for other First Nations to get involved with this industry.”