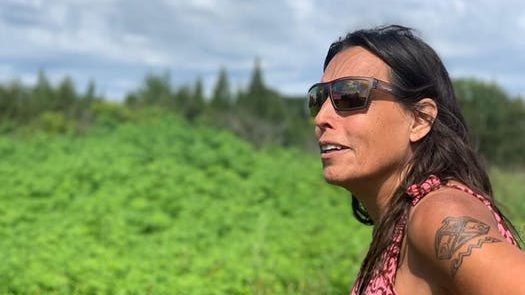 Winona LaDuke, environmentalist and a member of the White Earth Band of Ojibwe, is pushing hemp in Indian Country.

“Hemp is a cornerstone of a ‘post-petroleum’ economy and needs to be reintegrated into farming, particularly indigenous farming.”

LaDuke, an economics graduate from Harvard University, is best known recently for fighting Enbridge’s proposed oil pipeline across northern Minnesota. She also is program director of Honor the Earth, which focuses on climate change and environmental justice.

She also is in the vanguard of Minnesota’s born-again hemp industry, once a staple of the state’s farm economy. It was suppressed after World War II as government shut down related canvas and rope factories.

Many Minnesota farms once boasted hemp acreage, from which can be made rope, twine and fabric. Hemp also can produce CBD oil, which is a growing trend for health, including massage oils, and which lacks the THC found in marijuana that makes people high.

LaDuke and other Indian farmers are testing small plots of hemp. In addition to her own 40-acre farm, LaDuke has bought a second farm and established a nonprofit agency, for which she is seeking to raise $250,000 through a Kickstarter campaign.

LaDuke’s business, Winona’s Hemp & Heritage Farm, is working with her new Anishinaabe Agricultural Institute to build a “new locally grown economy based on food, energy and fiber” through a new hemp-production facility on LaDuke’s land next to tribal lands.

“I’m 60 and can do anything I want,” quipped LaDuke. “But I’m not a millionaire. That [Anishinaabe] farm will do research and that will be the nonprofit, independent tribal research station. It’s also about the vegetables we grow up here. I believe in biodiversity.

“I also want to build a mill that could handle up to 5,000 acres of hemp, grown by area farmers, to make canvas, rope, fabric and twine.

“We have a [tribal] economy predicated on federal programs and casinos. I want to work on restoring traditional economies and the economy of the future, a post-petroleum economy. Hemp can do almost everything that petroleum can do, including replacing some cotton and plastics.”

This is not just a pipe dream.

In 2016, LaDuke was one of the first registrants to receive an industrial permit to grow hemp in Minnesota.

She wants American Indians to get a slice of what has been projected to be a $20 billion-plus industry in the United States. Hemp is a versatile, fast-growing crop that uses much less water and chemicals than cotton and can act as a carbon sink. Deep-rooted hemp restores soil with nutrients. It’s a strain of the cannabis plant that can be processed into products such as paper, biodegradable plastics, biofuel, food and feed.

White Earth Chairman Michael Fairbanks, elected this month to oversee Minnesota’s largest band with nearly 20,000 members, said during his recent campaign that versatile, low-input hemp should be part of the economic and environmental strength of the White Earth community.

Fairbanks has been supportive of expansion of several acres of hemp-test plots on tribal land, in which LaDuke has been involved, and supporting White Earth farmers such as LaDuke in developing products and markets and further diversifying the White Earth economy.

The nearby Red Lake Reservation also is in the early stages of embracing agricultural hemp.

LaDuke recently told Hemp Magazine that there’s great opportunity to produce hemp-based fabric to replace some of the petroleum-based synthetics in clothing and other products.

“In our first year, we had seven hemp growers on the reservation,” LaDuke told the magazine this summer. “Now, there’s like 45.

“We’re going to need people to grow a lot of hemp to change the textile industry in this country. Everyone wants to make a lot of money on CBD [oils, pills and other ingestibles for health]. I’m trying to figure out how to protect Mother Earth, protect our water, protect our soil. If hemp can help build soil and sequester carbon, that’s also a pretty big thing.

“Also, almost everyone has a boat in Minnesota. If we’re going to move to a post-petroleum economy, we’re going to need a lot of hemp to get those boats made from hemp plastic instead of regular plastic. That’s not boutique production. We’re not making doilies up here.”