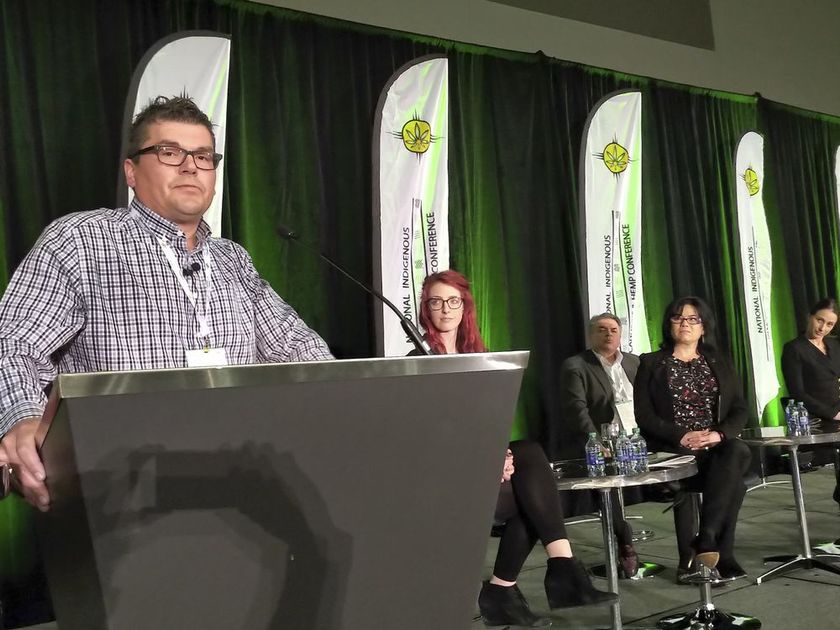 A “cannabis industrial park” could be built at Saugeen First Nation, part of a Canadian Indigenous business headquartered at Neyaashiinigmiing with global ambitions, company officials said this weekend.

“This potentially may be bigger than their Bruce-to-Milton deal, their hydro line deal,” said Jake Linklater, one of Wiisag Corporation’s founders and executive chairman, of his company’s arrangement inked with Saugeen.

Linklater, who’s from neighbouring Neyaashiinigmiing, called it a “legacy deal”.

Bryan Hendry, director of marketing and communications of Wiisag Corporation, said Saugeen First Nation has set aside 750 acres, for an industrial park, indoor and outdoor marijuana growing. He said he felt sure there would also be a retail component there as well.

“The timeline is pretty tight because we want to start growing in June,” he said. But the seedlings have to be started indoors before that, for a September harvest.

Hendry said a farmer from a marijuana outdoor grow company, Burnstown Farms, in the Ottawa Valley, will supervise the Saugeen grow-op. In January that company tweeted its own plans to raise $1 million to start building “one of Canada’s first premier organic outdoor cannabis farms.”

Just 25 acres will be used to grow marijuana outdoors at Saugeen First Nation in the first season, he said. “It’s basically a fence around a lot with some cameras and some lighting and a couple of indoor buildings to process the product,” he said. Each year a bit more pot will be grown, he said.

Oil from the plants will be extracted and sold solely for medicinal purposes – for the first two years anyway.

Twenty people will be hired “immediately” and 30 more some four weeks later. A job fair will be announced shortly, Linklater said.

Subject to what Saugeen First Nation wants to do, greenhouses could be erected in which to grow more marijuana too, he said. Retail cannabis sales are “not out of the question,” Linklater said.

After two years, consideration will also be given whether to enter the adult recreational pot market, he said. “That’s a discussion to happen after this outdoor grow. And it will be a determination of the Saugeen community whether they want to go down that route.”

The company which will hold the outdoor-grow licence, Wiisag Ventures, is expected to receive approval “within the next few weeks or so,” Linklater said. “I think we will be the first to receive an outdoor licence in Canada to grow,” Linklater said. Saugeen First Nation will own 51 per cent of that licence, he said.

Linklater is also president of Long North Capital Group, which is described on its website as a firm which provides expertise to “get the most out of the ever changing government policy, business climate and legal system in Canada.”

It helps find funding from government, private sources or both, its website says. “We do not charge for our work until there is a funding source established.”

Saugeen band council approved a motion in September to direct Randall Kahgee to do an economic development analysis on the “cannabis & hemp operations at Saugeen First Nation as presented from Long North Capital Group.”

Linklater said Long North Capital Group is no longer involved. Wiisag was set up instead to raise capital and share expertise focused on cannabis, he said.

It will seek to form partnerships with Indigenous communities in which it will fund, manage and operate their cultivation of marijuana, do research and development and provide access global markets, its website says. Wiisag’s CEO and co-founder is Joel Stickland.

First Nation communities will be sought particularly as partners, Linklater said, with each community owning 51 per cent of the grow licence and Wiisag owning the rest.

His First Nation at Neyaashiinigmiing hasn’t decided if it wants to get involved – and it might be hard for a marijuana plantation to grow in shallow soils there, Linklater said.

Hendry said the federal department of Indigenous Services Canada “could actually help fund” the business park because it recently changed regulations to allow its funding of cannabis ventures as well as distilleries and breweries on reserves, Hendry said.

Whether to pursue that revenue source would be up to Saugeen, Linklater said, not Wiisag.

Wiisag announced on Feb. 15, an agreement with the Westmoreland Hemp and Ganja Farmers Association in Jamaica. Wiisag will fund and manage a 10-acre pilot project to grow medical marijuana, expected to start in the second quarter of 2019.

And in November it announced it would offer personal health services designed and delivered by Indigenous nurses for people authorized for medical cannabis use and those who want to explore that option.

The federal government created an Indigenous Navigator and Licensing Portal to assist Indigenous applicants to become licensed producers of cannabis.

That is one of several services and programs offered by the federal government which are cannabis-related and can be found on federal online sites.