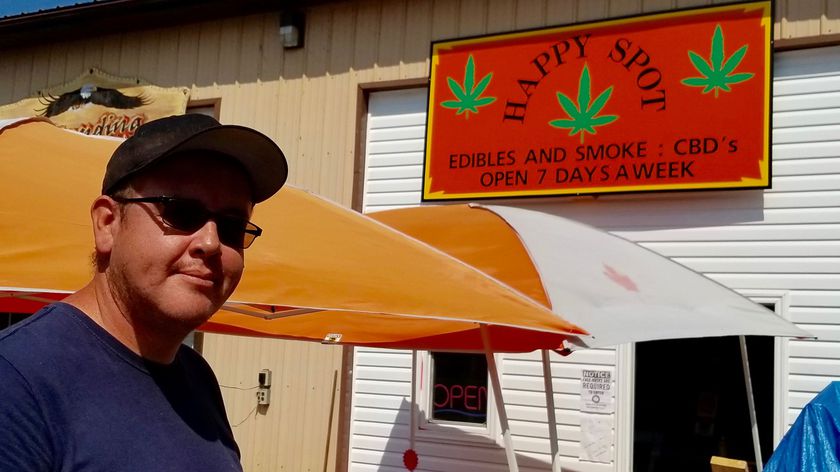 When the whitefish grew scarce, due largely he said to clearer and thus warmer water closer to shore caused by zebra mussels, he moved to fishing perch. When someone stole the motor on his small fishing boat, he stopped fishing.

He said the legalization of cannabis in Canada nearly two years ago left a “grey” area which recognizes the right of reserves to control their own marijuana sales.

It has opened up new possibilities for economic development on the reserve, Ritchie said, estimating it may employ 20 people at Saugeen, plus construction jobs, in a community he described as stagnant economically.

“It’s worth $2 billion a year in Canada, why wouldn’t you?” he said when asked why he got into the industry. “I think in Ontario alone, it’s $908 million a year right now. So you’d be pretty stupid not to get into that industry, wouldn’t you?”

Ritchie, 34, is a partner in one of the at least seven shops now open at Saugeen selling cannabis products including edibles, therapeutic balms and varieties of weed to smoke.

People familiar with pot shops on the reserve said Saugeen Chief Lester Anoquot is involved in one at Sauble Beach; a former band administrator and a band councillor opened one; and there’s one at band councillor Randy Roote’s gas bar too.

Saugeen council passed a band resolution May 29 which allowed “marijuana dispensaries” and requires operators to register their businesses. A separate business bylaw permits marijuana products to be sold in them.

Randy Roote, a former chief and retiring band councillor, said his son Kyle operates his own marijuana retail sales at his father’s gas bar but will be moving to his own premises soon.

Roote said council surveyed the community to get its approval before allowing pot shops on the reserve. Council will be “tweaking” what’s allowed to be sold at these dispensaries to limit it to cannabis products, he said.

Asked if the bylaw is designed to prevent sales of products which could be unsafe, he said that’s what the bylaw changes will address. “So it’s only marijuana that’s supposed to be sold – and that’s as far as we know that’s all that’s being sold.”

Roote said one regulation requires shops to be owned by band members, to avoid organized crime moving in, as he said has happened elsewhere. Only people 19 years and older may purchase the products.

He said buyers range from 19 to seniors. Some come to get high, while others buy it for the painkilling qualities of the cannabidiol (CBD), the most common cannabinoid in cannabis, which offers limited to no intoxicating effects.

Ritchie’s Happy Spot pot shop is in a former garage at the corner of Highway 21 and French Bay Road. He was renovating Monday to open up more retail space.

Ritchie said people are checked for ID regularly. About half come in for marijuana edibles. One product he sells that’s not edible is locally made. It’s in a shoe polish-sized tin containing a “healing beeswax balm” by Edge of Grey Naturals.

Most of his business is drawn from drive-by traffic, he said.

He sells pot in many forms, including drink crystals, coffee creamers, spices, caramels and chocolate bars. He sells vape pens, hash, 22 kinds of weed and pre-rolled joints – a product so popular at times he has struggled to keep in stock.

Marijuana for smoking is sold by the gram and ranges in price from $100 to $220 per ounce.

In addition to helping employ people, he said people who own businesses on the reserve also sponsor sports teams. It’s a big benefit because equipment and uniforms are costly, he said.

A 45-year-old Toronto man who stopped to purchase a couple of chocolate chip cookies containing marijuana for $10 and a few bags of marijuana bud, said he welcomed the arrival of shops like these.

“I think that the war on drugs is a big mess. I think a lot of people’s lives are damaged by it. And we have alcohol available all over the place, which is way worse.”

He said he thinks less alcohol will be consumed with the ready availability of pot products.

Generally the federal government licences growing, processing, distributing and selling cannabis. Provincial governments say where and how much pot may be consumed, issue retail licenses and control marketing.