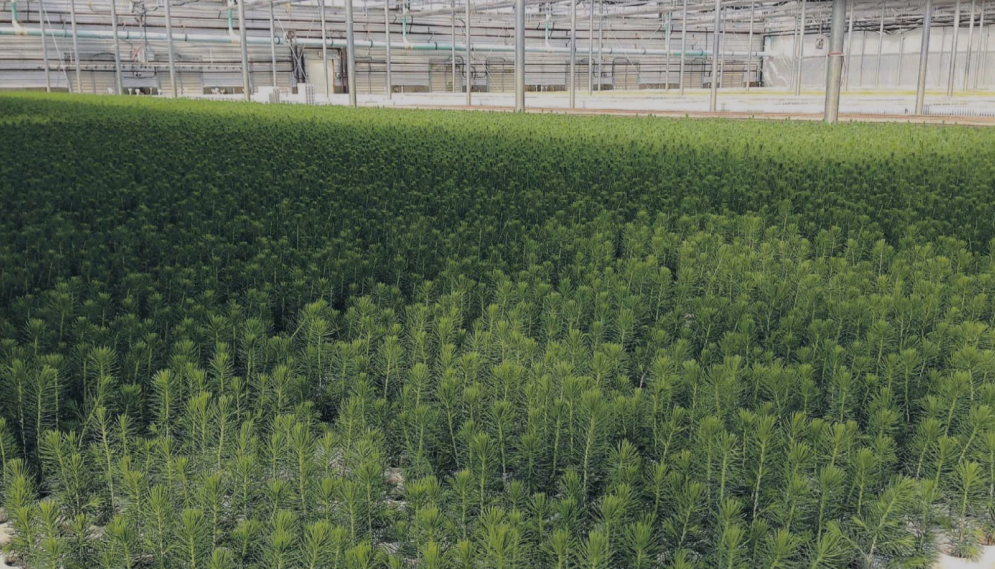 The Pineland Forest Nursery near Hadashville that operated as a government-owned tree-growing operation for 65 years is, literally, going to pot.

The nursery will be turned into a cannabis-growing operation, a source told the Free Press.

The province announced last spring it would close Pineland at year’s end and issued a request for proposals on May 15.

Two companies known to have made the short list of potential buyers were Shoal Lake 40 First Nation and the SwissReal Group. Coast to Coast Reforestation (C2C Trees) in Alberta, Canada’s second-largest producer of tree seedlings, is also believed to have been on the short list.

At least three companies were provided a tour of facilities last summer.

The winning bid is said to have come from Vancouver-based SwissReal Group. It isn’t known whether the company will own the entire site or have a lease arrangement because Pineland is on Crown land.

SwissReal is a commercial and residential real estate company. The only thing “high” about SwissReal are the towers it builds on the West Coast. Not having a previous connection to agriculture or the cannabis industry suggests it may be working with another company.

SwissReal toured the Pineland site last week as the new owner. Industry sources say the venture is in the very preliminary stages and the new company will have many hoops to jump through before it is licensed to start production.

The province gave its blessings early on to anyone wishing to convert the nursery into a cannabis operation. Growth, Enterprise and Trade Minister Blaine Pedersen suggested in May, when he announced Pineland would be made private, that the site would be ideal for growing pot.

SwissReal vice-president Jeremy Towning could not be reached for comment. The province would neither confirm nor deny the sale.

“The province will announce a selected proponent once details are confirmed,” a spokesperson said in a statement. “Pineland Forest Nursery will continue to operate in its current form until Dec. 31, 2018.”

There’s a mad rush to get into cannabis production. Companies across the country are buying up existing buildings to start legal grow operations. Licensed cannabis growers can also now start to legally cultivate crops outdoors.

The Pineland site is a massive facility. It has 67 greenhouses, including one huge greenhouse an acre in size, on a seven-acre parcel of land. It also has 300 acres of growing area available for long-term lease.

It features an 8.5-million BTU boiler heated by wood pellets to lower fossil fuel emissions and heat bills, in addition to a natural gas connection.

Culyer Cotton, policy analyst with Shoal Lake Band 40 in northwestern Ontario, said the band was also looking at Pineland for cannabis production. However, Shoal Lake 40 dropped out when it realized it didn’t have the money to compete.

“You’re up against giant corporations,” Cotton said. “The First Nation did its due diligence, did an analysis and just chose not to pursue it.”

As well, the buyer will have to shell out money to prepare the site.

Pineland Forest Nursery was originally established to produce seedlings for Manitoba but expanded to supply customers in central Canada and the northern United States, too. About 525,000 seedlings — 10 per cent of Pineland’s crop — is for out-of-province contracts this year. Its seedlings are typically used to reforest areas where timber has been harvested.

Pineland has eight full-time and 18 seasonal workers. Full-time employees have been guaranteed jobs with the province, but that means commuting into the city; Hadashville is located about 100 kilometres east of Winnipeg.

While Pineland is supposed to shut down Dec. 31, there are still tree seedlings in its freezer for shipment from January through March. It has grown a variety of trees but specialized in conifers such as white spruce, black spruce, Norway spruce, jack pine, red pine, eastern white pine and Scots pine.

Pineland Forest Nursery operated in the black for many years, but the province said it is now $4 million in debt with annual deficits of $500,000. The Pallister government blamed the finances on the previous government’s mismanagement and the decision to subsidize seedling sales to the Tolko paper mill in The Pas.

The province said Manitoba’s needs in the future will be supplied through a tender process with private nurseries.