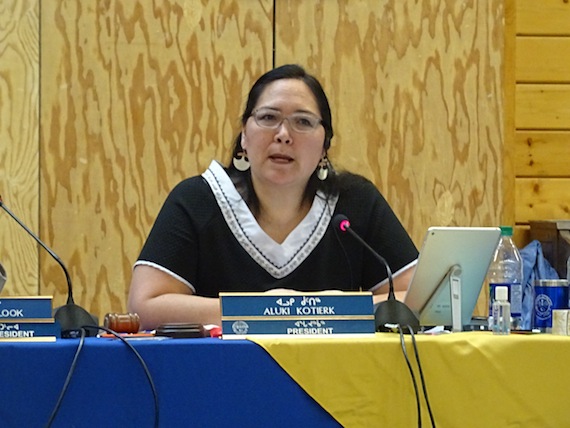 CAMBRIDGE BAY—If Nunavut’s next MLAs want direction on issues ranging from the legalization of cannabis to education, they can turn to the resolutions that emerged from the annual general meeting of Nunavut Tunngavik Inc., the birthright organization for the territory’s Inuit, which met this past week in Cambridge Bay.

That was the suggestion made at the AGM by Olayuk Akesuk, a former Nunavut MLA and cabinet minister who now serves as vice president of the Qikiqtani Inuit Association.

Other resolutions unanimously passed at the meeting targeted the federal government.

For example, on the legalization of cannabis, set to come into effect July 1, 2018, NTI said Ottawa should postpone the entire process.

NTI said the federal government needs to consult with Inuit on whether cannabis should be legalized and, if so, when, as well as plan to deal with the possible negative impacts of legalizing cannabis, more commonly called marijuana or weed and, in Inuktitut, “ujarak” or “milutsi.”

In the same resolution, NTI also asked the federal and territorial governments to establish addictions treatment, rehabilitation and other healing centres in Nunavut.

During discussions at the AGM, one delegate said it’s as if Inuit had been “invisible” in the debate around the legalization of marijuana. Others spoke about how drug use had already damaged families.

A resolution on education and language looked to Ottawa and Iqaluit for action on increasing Inuit employment under Article 23 of the Nunavut Agreement.

Article 23 says Inuit should at some point be represented in the Nunavut government at the same level as in the territory’s population—that is, 84 per cent. Right now, Nunavut Inuit hold only 51 per cent of territorial and federal jobs, according to a study by NTI, cited by NTI President Aluki Kotierk during the meeting.

The cost of not implementing Article 23 mean lost revenues of $1.2 billion to Nunavut Inuit between 2017 and 2023, Kotierk said.

But implementing representative Inuit employment would save the government about $500,000 over five years in areas such as housing, income assistance and employment insurance, she said.

Around the table, some singled out the federally-funded Canadian High Arctic Research Station in Cambridge Bay, whose delayed opening is now set for February 2018, for its lack of Inuit hiring and the construction of new housing for employees imported from the South.

NTI’s resolution on employment and education also calls on the Government of Canada to recognize Inuktut as an official language in Nunavut and to provide funding to Nunavut for bilingual services.

That same resolution asks the federal and territorial governments for a “major new funding commitment” for the training and hiring of Inuit educators, to analyze the numbers and locations of potential teachers, language specialists and other Inuit educators, and to develop a new Education Act timetable.

This resolution echoed information presented to the AGM by Ian Martin from York University who suggested that only a massive Inuktut-speaking teacher-education program could stem the erosion of Inuktut among Nunavummiut and the decrease in the number of Inuit teachers, which dropped from 245 in 2008 to 125 in 2016.

Martin, who released a report on Inuit language loss earlier this year, said 366 new Inuit teachers would be needed to offer Inuktut as a language of instruction to Grade 12.

• Governments should work closely with Inuit organizations and “take immediate, concrete steps, including necessary funding, to make the Arctic University a reality.”

• The Government of Nunavut should take “immediate, concrete steps to put long-term care facilities in each community in Nunavut,” such as the one Kugluktuk wants to see, and establish a funding program for elder care services with government agencies and external funding sources.

• The GN should re-establish education and health boards because “the abolition of these boards [in 2000] weakened Inuit participation and created significant gaps in the decision-making process.

• Governments should increase regulations of ships of all sizes entering Nunavut waters “to avoid interference with Inuit hunting activities and minimize disturbance to wildlife.”

“We will have to keep repeating what we want,” Kotierk said about NTI’s advocacy on government policies and programs.

NTI also committed $5 million to the heritage centre and a matching contribution of $2 million to the Kivalliq Inuit Association’s plan to set up cultural centres, which would also have a healing component, in all seven Kivalliq communities.

Among the items dealt with during the first day of the three-day gathering: the amounts the four Nunavut Inuit organizations will receive from the Nunavut Trust.

Delegates from the regional Inuit organizations questioned the division of the money, which takes into account population, and other factors, such as travel costs, in its calculation.

The Nunavut Trust was created in 1993 to manage and invest the $1.114 billion settlement that Inuit received through the Nunavut Agreement.

NTI borrowed more than $146 million in its early years to pay start-up costs for itself and the three regional Inuit organizations. In 2017, NTI paid off $6.9 million, according to 2016-17 financial statements.

NTI’s expenses for the 2017 fiscal year amounted to $39 million, including about $11 million for salaries and employee benefits.

NTI plans to hold its 2018 AGM next October in Iqaluit.