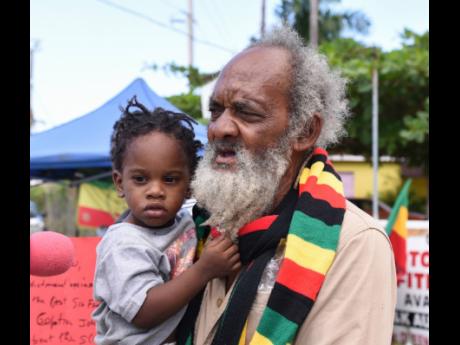 From The Gleaner Western Bureau September 20 2022

RASTAFARIAN ELDER Ras Iyah V, who was one of the key advocates for the decriminalisation of ganja, says he is not optimistic that small ganja farmers will ever benefit from the emerging medicinal cannabis industry, unless legislation is put in place to guarantee those benefits.

Responding to a recent statement by Sport, Culture and Entertainment Minister Oliver Grange, who expressed much disappointment that the Rastafarian community is not benefiting more meaningfully from the multibillion-dollar medicinal cannabis industry, Ras Iyah V said the Government needs to level the playing field for all stakeholders.

“I cannot be an optimist until I see the Government really a do something,” said Ras Iyah V, the founding chairman of the Westmoreland Hemp and Ganja Growers Association and an internationally known spokesman on matters relating to the use of ganja as a sacrament by indigenous people.

Speaking at last week’s CanEx Business Conference and Expo, in Montego Bay, Grange said the Rastafarian community deserves rich accolades for cultivating, safeguarding, and preserving ganja for its cultural, medicinal, and therapeutic uses, especially as it relates to the fact that many members of the Rastafarian community suffered harshly for promoting an activity which was illegal, and which has now morphed into a global multibillion-dollar industry.

“My ministry, the Ministry of Culture, is the focal point for Rasta, and we are not satisfied that the Rastafari community is benefiting from all of this,” Grange lamented.

However, Ras Iyah V retorted that there is too much talk and no action, as Rastafarians and small ganja farmers are still facing harassment from the police.

“I don’t appreciate lip service. Yes, we give thanks that Babsy Grange has said that, but what is the Government doing to ensure and guarantee that Rastafari is not harassed for having herb in their possession and that we can participate and benefit meaningfully from the cannabis industry?” questioned the Rastafarian elder.

While noting that the country’s Dangerous Drug Act was amended in 2015 to decriminalise the use of small quantities of marijuana, Ras Iyah V said that seven years later, nothing has been done to enable indigenous farmers or to firmly establish a solid, thriving, globally acclaimed cannabis industry in Jamaica, which would bring revenues to households, companies, and the Government.

“I have been saying to the government, that is stupidness, because it’s not every Rastafari plant herb, but they use it in some form or the other, not necessary smoking it,” said Iyah V. “We have been lobbying for Rastafari who plants herb to have the right to transport it from wherever it was grown to sacramental points of distribution, where Rastafari brethren and sistren want the herb, but doesn’t plant it, and wants to access it.”

Ras Iyah V also expressed displeasure that the Rastafarian Advisory Board, which was established by Mark Golding under a previous People’s National Party administration, has been scrapped by the current administration.

“Mark Golding had a Rastafarian board that would advise him on the issues affecting Rastafari directly or indirectly, but since the government changed in 2016, we have been trying our best to have an audience with Justice Minister Delroy Chuck and have not been successful,” said Ras Iyah V, noting to they no longer have an outlet to address atrocities against Rastafarians for using ganja.

Published in Aboriginal Right and Jamaica