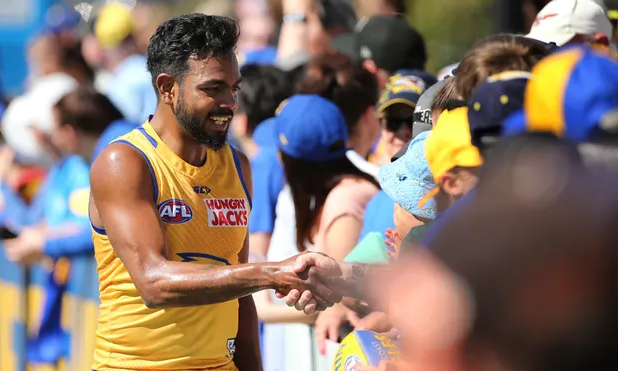 Contrary to popular belief and convenient narratives, the AFL star does not need to be fixed by a justice system that fails Indigenous people

From The Guardian by Ben Abbatangelo May 15 2021

This week West Coast Eagles forward Willie Rioli was dragged through the Darwin courts for possession of cannabis. But placing the AFL star in front of the magistrate was a knee-jerk reaction that does not yield any benefits for him or the wider community.

Although I have the highest expectations of Rioli and every other Indigenous person on the planet – not just those in the public eye – I am neither enraged nor disappointed by his recent actions.

To me, Rioli’s possession of cannabis is barely a sidebar to this story. And it is an abomination that for so many others, it has acted as the centrepiece.

The more I engage with this non-story, the more I realise that Rioli’s public persecution is less about his actions and more about Australia’s archaic love affair with public humiliation and carceral justice.

The essential elements of this story begin with the reality that federal and state governments have engineered a draconian society, in which an individual – Rioli – attends more funerals in the space of two years than his 38 games of football for the West Coast Eagles.

Unlike Rioli, I have never been directly exposed to such an amount of loss. However these snowballing levels of grief are commonplace for many Aboriginal communities across the country. The intensity of despair in the wake of such trauma is unimaginable to me but, as an Aboriginal person living in the colony, I can empathise with those seeking escapism in the pursuit of briefly feeling freedom’s embrace.

For many Aboriginal and Torres Strait Islander people, these glimpses of freedom have been sought and found on the sporting field – a sanctuary where we can momentarily emancipate ourselves from society’s suffocating limitations and self-actualise through creative expression.

Being caught in possession of cannabis – a drug that has been legalised for both medicinal and recreational use in countries like Canada, the US, Uruguay, Netherlands, Belgium, Mexico, Portugal and Spain – while in the midst of losing more of the most precious things that sustain you, demands the village’s warm embrace, not its vilification and abandonment.

As the most incarcerated group of people on the planet, it is well documented that Aboriginal people are subjugated to the full wrath of the justice system – regardless of the severity of the alleged offence.

The routine nature of placing Rioli in front of a judge as a first resort, not last, is a by-product of having the most police per capita, the seventh fastest prison spending growth rate in the OECD and a fetishisation of criminalising Aboriginal people.

As Rioli needlessly faced the court, only a couple of hundred metres away, the Northern Territory government were meeting their “tough on crime” rhetoric with tyrannical legislation that directly contradicts the recommendations of the 2017 Royal Commission into the protection and detention of children in the Northern Territory.

The newly passed legislation gives police unprecedented powers, makes it harder for children to receive bail (effectively removing the presumption of innocence), minimises access to diversion programs which reduce offence rates by 70% and expands the operational capacity of the oppressive Don Dale Detention Centre – despite the Chief Minister and Royal Commission demanding, and Michael Gunner agreeing, that it should be closed down.

There is a multiplication of problems that deserve our increasingly limited attention spans and growing disgust. Willie Rioli isn’t one of them.

It is now up to the football community’s imagination, or lack thereof, to decide what is next for Rioli. I personally will not be holding my breath as the industry, much like Australian society, has a long history of abandoning those that are in need of its support and care.