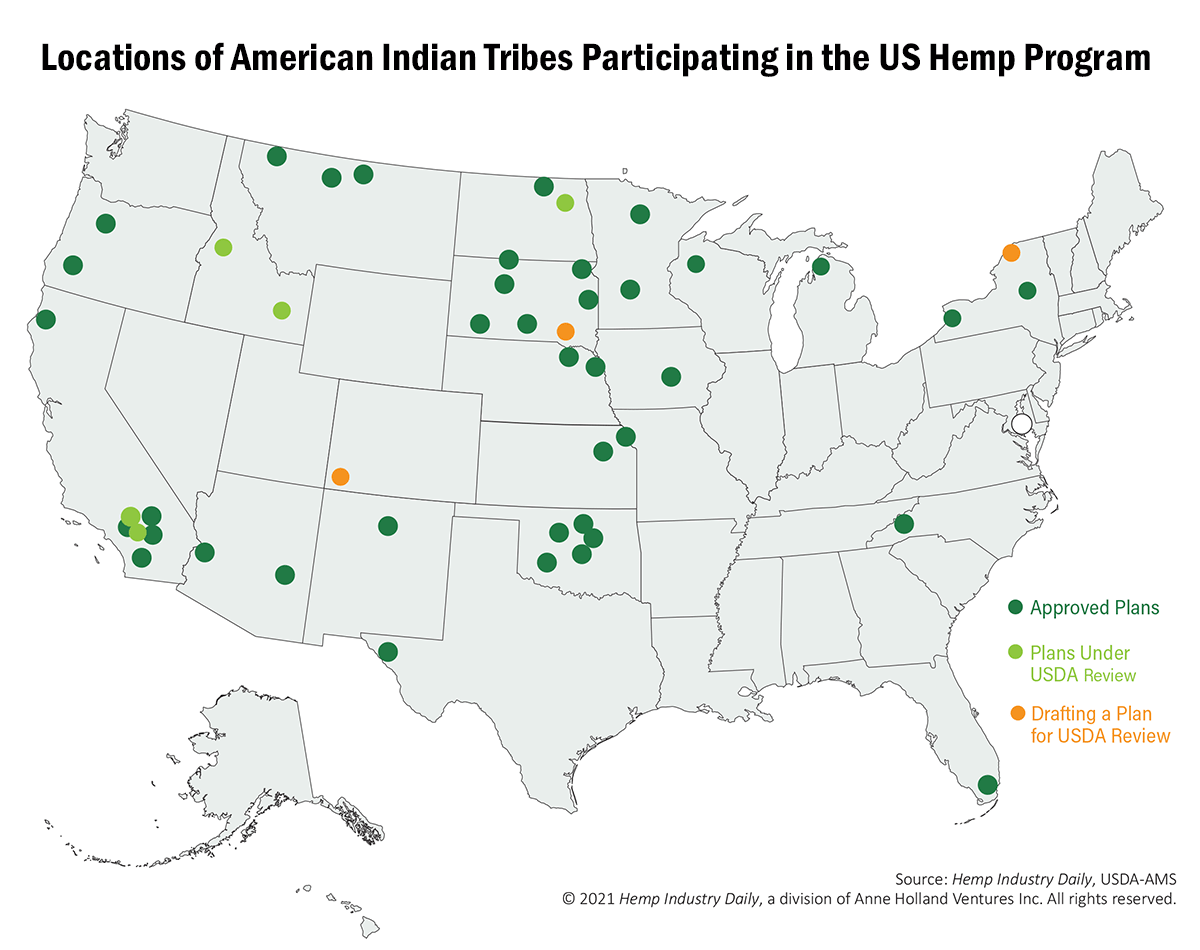 From HempIndustryDaily.com by Laura Drotleff January 21, 2021

(This is the first of a two-part story from Hemp Industry Daily examining the developing hemp markets on tribal lands in the United States. For more detail about tribes growing hemp, check out Hemp Industry Daily’s Hemp & CBD Factbook, available for purchase here.)

It’s been more than two years since nationwide hemp legalization offered a legal pathway for American Indian tribes to produce hemp and CBD and find commercial outlets for selling it.

But it hasn’t been an easy road for tribes to establish hemp production.

When Congress first allowed experimentation with legal hemp, through the 2014 Farm Bill, states were granted the authority to set up hemp pilot research programs. But the law did not provide American Indian tribes the authority to implement their own industrial hemp cultivation programs regardless of state law.

The Menominee tribe of Wisconsin found out the hard way in 2015.

The tribe tried to grow industrial hemp, only to have federal agents seize 30,000 plants from its reservation after a federal court ruled that year that the 2014 Farm Bill required that hemp be cultivated in compliance with state law. At the time, hemp production was not yet legal in Wisconsin.

The 2018 Farm Bill, aimed to fix that, directing the U.S. Department of Agriculture to develop a system for American Indian tribes to submit plans for hemp production on tribal lands.

Even after the passage of the 2018 Farm Bill, tribes were forced to wait until the USDA established hemp production regulations that could apply to indigenous lands.

By the summer of 2019, the Flandreau Santee Sioux Tribe in South Dakota filed a lawsuit against the USDA over delays.

The tribe argued that that under the 2018 Farm Bill, the agency was required to approve production plans within 60 days, regardless of whether regulations were in place. Failure to do this impeded American Indians from capitalizing on hemp production during the 2019 season.

The tribe requested a temporary restraining order against the USDA and a preliminary injunction to allow it to proceed with its hemp crop in 2019. But the request was denied, citing the USDA’s announcement that it had planned to finalized rules in the fall, in time for the 2020 growing season.

It is difficult to quantify how many acres of hemp are under production or exactly what is being grown in the United States.

Trouble in the tribes

Another concern among American Indian tribes is corruption within tribal councils.

Tim Houseberg, a Cherokee Nation citizen and co-founder and vice president of the Native Health Matters Foundation, said that rulemaking can be frustratingly slow for tribal citizens.

“The only thing harder on Indian tribes than the United States government has been the tribal government,” Houseberg told Hemp Industry Daily.

Some tribes have dealt with unsavory practices in which tribal members have taken advantage of the land they have leased by growing federally illegal marijuana under the auspices of hemp production.

A three-day FBI raid of 21 farms in the Shiprock area of the Navajo Nation in New Mexico late last year destroyed more than a quarter million marijuana plants that were allegedly grown illegally as unlicensed hemp on the tribal nation’s lands.

Such issues have made some tribes wary of getting involved in high-THC marijuana production as well.

In the first quarter of this year, the USDA is expected to release its State and Tribal Hemp Annual Report, which should provide more clarity on the size and scope of hemp production in 2020.

States and tribes are required to report the total acreage planted, harvested and disposed in their jurisdictions.

The agency addressed one slowdown facing tribes just this month when it released its final rule for nationwide hemp production.

The final rule that the USDA released on Jan. 15 defines “territory of the Indian Tribe” as all land within the limits of any Indian reservation, all dependent Indian communities, all Indian allotments, and any lands held in trust for the benefit of any Indian tribe within the U.S.

Under an approved tribal plan, an American tribe will have regulatory authority over hemp production within its territory.

Laura Drotleff can be reached at laura.drotleff@hempindustrydaily.com