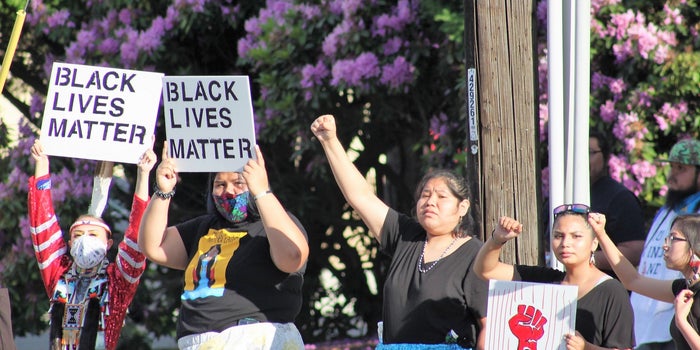 On June 4th, a group of Nez Perce students organized a Natives for Black Lives Matter demonstration in front of the Nez Perce County Courthouse in Lewiston, Idaho. The event was supported by faculty, tribal leadership, and elders. The executive director and chaplain of the tribe were there holding signs and several tribal police officers were requested by the tribe to be present (off-reservation).

I was not aware that the event was taking place because all of the news had been focused on a Black Lives Matter protest scheduled for Saturday. But I was in town to work on the summer issue of Tribal Hemp & Cannabis Magazine, laying out stories of Indigenous women in cannabis and our latest feature: a Tribal Nation’s Dispensary and Farm Map. When I saw the protest,  I pulled over, grabbed my camera bag, and proceeded down the sidewalk to capture it.

A couple of 4×4 trucks were parked kitty-corner to the student protest. They were surrounded by a group of men and one woman. I had to walk by them to get the best shots of the students. As I got closer, I noticed the men had firearms. “Are you folks here counter-protesting the Nez Perce student protest?” I asked. “We’re not here counter-protesting anything, we’re just here to make sure no glass gets broken,” one said.

They were private citizens, armed with two Colt .45’s, an AR-15, and a sword! That’s a lot of ammo to protect a government building—let along someone else’s private property. I hit record on my cell phone.

As I started taking close up shots of the guns, the group of gun-toting citizens became irritated.  “Go to the other side of the road with your people,” one said. To clarify, I have nothing against them having guns. I own firearms and stand for the protection of all rights. But I use guns for harvesting.

The group went on to explain that they were “100 percent certain” that no glass would be broken on their watch. I realized that explaining to them that they would not be legally protected by using lethal force to protect a county courthouse was futile. So was telling them that they are on Nez Perce Indian homelands and that our people have shed enough blood across the nation. Or that most of the blood came after signing of peace treaties with the United States government.

Property. Private property. Destruction of property. Protecting property. People as property. The word “property” is foundational in the history of our nation. Property is a gift that keeps on giving, but it’s also wrapped in disease, sprinkled in broken promises, and tied together with a bow of denial.

“It’s a free country!!” a counter-protester told me. As a 41-year-old indigenous woman, it was a shock for me to hear those words used to defend himself. There was nothing free about how this nation was founded, and yet most citizens use this catchphrase that has been ingrained in their psyches since kindergarten. The vision I have about Indigenous cannabis education includes the integration of a new land tenure education. It’s one that reflects value and dignity and honors the notion of a truly free country.

A few years back, I was talking with an elder about the work I was doing in tribal hemp and cannabis policy. I explained to him how we needed mainstream America to help protect the Indigenous cannabis communities. His response still resonates with me, even more today as his prophecy is being realized.

He said, “The sleeping giants of the world are waking up. Our people may not be ready; some of them will have to be brought along the journey kicking and screaming.” He went on to tell me stories about the seeds, pointing me to rocks previously unturned, to unearth an ecosystem that tells ancient stories of healing.

“Did you know that our rope economy was created by the women?” he asked, as we discussed the pre-Colonial history and how the current conversations skip past our peace pipes. [Explorers] Lewis & Clark wrote all about the rope economy and about us being pipe carriers. We were rich and well known in the Columbia Plateau because of the quality and abundance created by our women. The entire region wanted to trade for and with rope from the Qemu’yeeme’pe, or hemp rope people” the elder explained.

The elder also told me about looking deeper for truth, not just within the texts of world history. but within myself. In our spiritual circle or tribal community, there exists little to no shame of being smoking people. It was illegal perhaps, but also a norm that survived as most cannabis subcultures did. It is only in the outside world, where the permission no longer exists to pray in our ancient ways and connect with our ancestors through smoke. For thousands of years, this reciprocity took place, trading smoke prayers for the responsibility of protecting Mother Earth and all our relations. The Treaties our Chiefs bargained and negotiated for over smoke is also a part of record with the federal government. The treaty meeting minutes as a tool to protect our smoking way of life. Put that in your peace pipes and smoke it!

I recently heard a podcast from Culture Interrupted, where the “father of the legal cannabis industry,” Steve DeAngelo, was discussing the interruption of cannabis legacy culture by the newbies. My knee-jerk reaction was, “Holy cow, how do you think California tribes feel about rich cannabis newbies forgetting about tribal sovereignty?” H

Here’s what I mean: In California, they failed to include two simple words, “and Tribes,” to ensure the protection of tribal sovereignty in state legislation. Proposition 64, California’s long overdue action to decriminalize cannabis, really got it wrong.

I ended up on DeAngelo’s Instagram page urging him to step up his game in the protection of tribal sovereignty in his push for federal legalization. But while listening to the discussion on “legacy culture,” I was also struck by how DeAngelo eloquently described the welcoming nature of our circles and how they open up to allow others to partake in communal healing and medicine. The practice DeAngelo is describing is the essence of Indigenous cannabis culture. Daily smoke. Prayers. Contemplation. Reflection. Anticipation. Compassion. Preparation. It is documented in nearly every treaty executed between the United States government and the Indigenous tribes. The Chiefs bargained for and negotiated the peace trade over smoke.

Why is it that little to no social equity platforms include the protection of the nation’s Indigenous cannabis marketplaces?  Yes, tribal law is complex. It becomes even more complex for tribes fighting against county and state jurisdictions when trying to build tribal economies, yet certain states are exempt from federal intrusion under special appropriations riders. I venture to say it is only because, well, we didn’t know any better? Now we do know better. We know that today hundreds of Tribes across the nation will not move towards whole plant medicine integration and textiles when they fear the long reach of federal agencies. Why?

Property. Indian land. Title to property. In many of our communities, these racists attitudes and beliefs are rooted in the land. Land tenure. Who owns the land? How did they acquire it? Who has criminal versus civil jurisdiction? Who pays taxes or how the Indian lands’ burden ‘our’ schools. It was a common practice to pay soldiers in land for service up until World War II, including the soldiers who fought in the Indian Wars of the late 1800’s. While my people signed a treaty of peace and protection with the United States government in 1855, we encountered our own bloody battles after the discovery of gold in our homelands.

As an Indigenous woman, I was passed down the oral histories of my great-great-great-great-great-grandfather Chief LookingGlass. He was present and signed the Treaty with the Nez Perces. The second X. His intentions were clear. He was executing a living will and all rights retained were for his unborn Nez Perce blood. In 1877, LookingGlass was murdered by the U.S. Government, leaving his 14-year-old daughter Pi-in-halxpawit to escape into Canada. She returned seven years later to begin a family and was given the Christian name Mary Oatman to receive farmlands. As my family researches hemp farming here in Idaho and I look out into the vast tracts of checkerboard reservation lands I have to wonder, “How many acres did the soldier receive as payment for the death of my Chief?”

An opportunity for real conversation

The truth and reconciliation of land tenure must start with a real conversation. It will be uncomfortable. But it will also be a time for national growth, like we are experiencing with the Black Lives Matter dialogue. We have seen many of our Indigenous organizations standing behind that movement, as we share in the pain and oppression of our nation’s land tenure practices. What was stolen from the Indigenous peoples was then developed by our Indigenous Black brothers and sisters by force, displaced from their own homelands to build this great nation. And it is a great country that will become greater as we continue towards truth and reconciliation.

There are many political interests that stand in opposition of federal legalization of cannabis. Most of them have conflicts of interest with their current land interests and stock holdings. Learning more about tribal sovereignty should be a duty of all Americans. Breaking away from policies that hinder Indigenous economic growth, food sovereignty, and reclamation of our Indigenous ways of praying will include major changes in the foundational laws of this nation. It is a start to building something beyond and bigger than us, like Chief LookingGlass did.

My sons and daughter continue to harvest, fish, gather medicines, and walk the trails of our Nez Perce ancestors. We still drink from natural springs that have flowed for tens of thousands of years. It is our duty and responsibility to plan for the next seven generations so that they can use and enjoy the same precious gifts. With the insatiable greed and over-use of resources, I cannot imagine what our Nez Perce homelands would be like without the protection of the Peace Treaty of 1855.