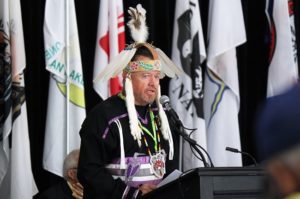 “The age of buying our products is still 21. We realized afterwards that there were some concerns of post-secondary students that would be looking for work opportunities. It might limit them from working in these stores.”

“We don’t want to limit employment opportunities for post-secondary students. So we lowered the age of working in the stores to 19.”

Meanwhile, Nipissing First Nation CEO Dwayne Nashkawa told Chief and Council on Dec. 17 that the Ministry of the Attorney General is open to cannabis negotiations with First Nations. Chief McLeod says the meeting is set with the province soon in Toronto.

“We’re hopeful it will lead to better opportunities for our communities to break into the market and provide economic benefits for our retailers. Because under the current model, assuming a provincial license doesn’t give competitive environments for retailers to enter that market. You have West Nipissing or North Bay, if you have stores at either one of those municipalities, what is the incentive for people to come and shop in First Nation communities when they can get the same price down the block?” explains Chief McLeod. “We are looking for some type of environment where we can have built-in equity for us to participate in that market.”

“Rather than delegating the authority of licensing and regulation to First Nations, which would have been the right thing to do, they delegated to the province and now we are left trying to work with a lesser government to get our jurisdictional rights in place,” says Chief McLeod. “It could have been easily dealt with at the federal level by delegating authority to First Nations…The federal government has agreements with us on lands management. We have the power to make our own laws but when it comes to us actually putting things in practice, they sidestep us and sent it to the province.”

Chief McLeod cautions that the market is going to have a ceiling and limitations on how much it provides.

“I don’t believe cannabis is going to answer all economic needs but it sure will help to stimulate local First Nation economy and provide jobs.”