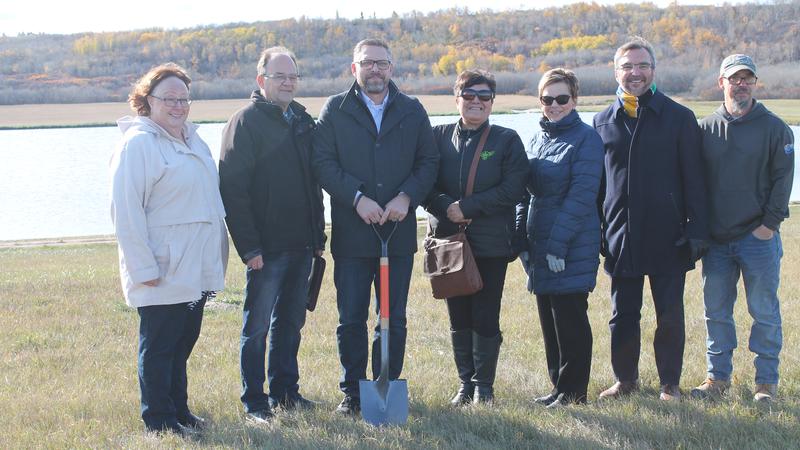 From battlefordsnow.com link to article by Angela Brown, Oct 9th 2019

The Town of Battleford came together with supporters for a special sod-turning ceremony Wednesday to announce the start of the $5.2 million lagoon wastewater treatment system upgrade and expansion project.

The federal government will contribute $2,106,000, and the province $1,754,825, leaving the town to put in the remaining $1,404,176 of the total $5,265,000 cost in the partnership. Thunderchild First Nation is also helping with the funding because it will be tapping into the lagoon system once its new indoor cannabis cultivation facility being built on the outskirts of the town is completed.

The town plans to upgrade and expand the lagoon system over the next year.

He added the funding support from the provincial and federal government will help to strengthen the town’s future relationships for economic growth for Thunderchild and Poundmaker First Nations who own property in the town’s vicinity.

The work is also needed to provide more long-term capacity for the growing Battleford community—both residentially and economically, and also to upgrade the lagoon system itself since it is aging.

Battlefords MLA Herb Cox was also on site for the ceremony to show his support on behalf of the province.

The work to complete upgrades and expand the lagoon system has been in the planning stages for about past two years.

Workers will also build one or two new cells as part of the project to the northwest of the existing site.

The burns between the cells will also be upgraded and drained as well because they wear out over time.

“They erode and we just want to make sure everything is good,” he said.

The project will also include replacing the blower building which provides aeration to the lagoon cells.

Work will commence next spring and is expected to be completed by the end of 2020.

Now that it has the funding in place, it can finish the project in one year instead. Leslie said the funding “is a tremendous gift for taxpayers” when factoring in the savings now that the province and federal government have committed their support.