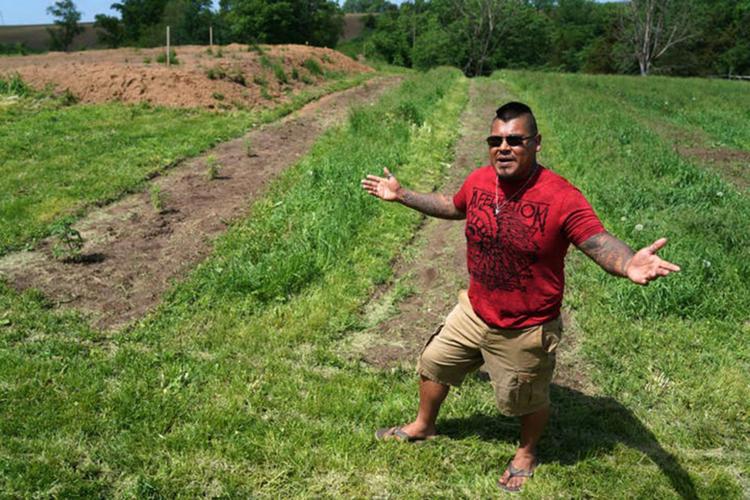 From aberdeennews.com link to article by Brandon Stahl, June 12th 2019

LANESBORO, Minn. — Eagles often soar overhead as Luis Hummel tends to his hemp crop in southeastern Minnesota. Though he has only a few acres located just down the road from the Eagle Bluff Learning Center, what he’s hoping to harvest in the fall could provide a multimillion-dollar yield.

The Department of Agriculture wants him to destroy it all, saying he’s violated the terms of his hemp growers license. Now Hummel has taken the state to court to save his crop.

A self-described hippie with a mohawk, a body covered in tattoos and a mission “to unify humanity” with hemp, Hummel’s demeanor changes when it comes to the coming legal fight ahead with the agriculture department. He’s the first grower to lose his license since growing hemp became legal in Minnesota in 2015.

“This is war,” Hummel said, standing among newly planted rows of hemp.

The battle between Hummel and the state highlights the challenges of regulating an industry that proponents say could be a billion-dollar business.

The number of hemp farmers has grown like a weed since it was legalized. But Paul Johnson, president of Minnesota Hemp Farmers and Manufacturers Association, hears daily from members who are struggling with the state over a lack of clear communication, Johnson said. Growers don’t understand what rules need to be followed to stay legal, he said.

The agriculture department doesn’t “understand their own regulations,” he said. “They say one thing one day and do something different the next.”

“We want this to be a really successful industry,” she said. “These new entrepreneurs want to do all of these things and develop this new product, but we’re all trying to figure out the regulations.”

Hummel grew up in suburban Chicago, but realized he wasn’t meant for city life. He sold what he had and drove out West, where he learned about hemp and marijuana growing, which were becoming more accepted and legal.

He came back to the Midwest in 2016, and while in southeastern Minnesota came across ditch weed, industrial hemp plants produced for fiber during World War II that had adapted to the state’s harsh winters and farm pesticides.

With the federal government legalizing hemp farming two years prior, Hummel had the idea of taking the ditchweed and crossing it with strains from Canada and the West Coast.

He obtained his license in March 2018, named his company “5th Sun Gardens” to honor his indigenous heritage, and bought a few acres of land near where he first spotted the ditch weed.

He said he was in constant communication with the agriculture department to ensure that he has producing legal hemp, which allows a maximum 0.3% THC level — the psychoactive part of cannabis. A marijuana joint, for comparison, has about 12% to 15% THC.

Hummel sang to his plants and held smudging ceremonies for them. He harvested his first crop last fall, using that to make a variety of CBD products, from salve to lip balm to bath bombs.

CBD products, he said, “can be used for anything you might use medical marijuana for.”

The state renewed his license at the beginning of 2019. His vision is to turn part of his farm into a venue for concerts and events.

Then in May, Hummel received a letter from the state Department of Agriculture. The agency told Hummel that law enforcement in Fillmore County stopped someone who had “cannabis products belonging” to Hummel’s company and traveling to the Twin Cities on his behalf.

The THC tested exceeded the legal limit allowed, and as a result, Hummel was ordered to destroy his crop, which he values at about $3 million.

Thus far, Hummel said he has received no other information about who was stopped, and what was tested. His company is an employee of one, and though he has contractors, he said he hasn’t heard from anyone who was stopped with his product.

“I don’t know why they’re coming after me,” he said.

Other hemp growers in the industry took notice of the suit and said it shows how the Department of Agriculture isn’t working with farmers to be successful.

“If they want to destroy our livelihood’s without due process, that’s not OK.” said Johnson, of the Minnesota Hemp Farmers and Manufacturers Association.

Other hemp farmers praise the state.

“The people working inside the (department) are advocates for hemp,” said John Strohfus, owner of Minnesota Hemp Farms, the largest grower in the state. “These are growing pains.”

As demand for CBD and hemp products has grown, so to have the number of farmers. In 2016, the state licensed six growers who planted 38 acres of hemp. Those numbers have risen this year to 385 hemp farmers approved to plant 11,045 acres.

Part of the problem may have been how THC levels can increase when hemp is processed to become CBD. The state tested it before harvest and found it under the legal limit. But it doesn’t test after the hemp is processed. It’s possible that Hummel’s CBD had something as low as 0.4% THC, but Hummel said the department has not told him what the actual level was.

Place, the assistant agriculture commissioner, said there are gray areas in the law about what can be used as a CBD product. But she said the law is clear on what happens if someone is caught with a product with higher than the legal limit.

“That license would be revoked,” she said.

Hummel said if he loses his court battle with the state, he’d sell his crop.