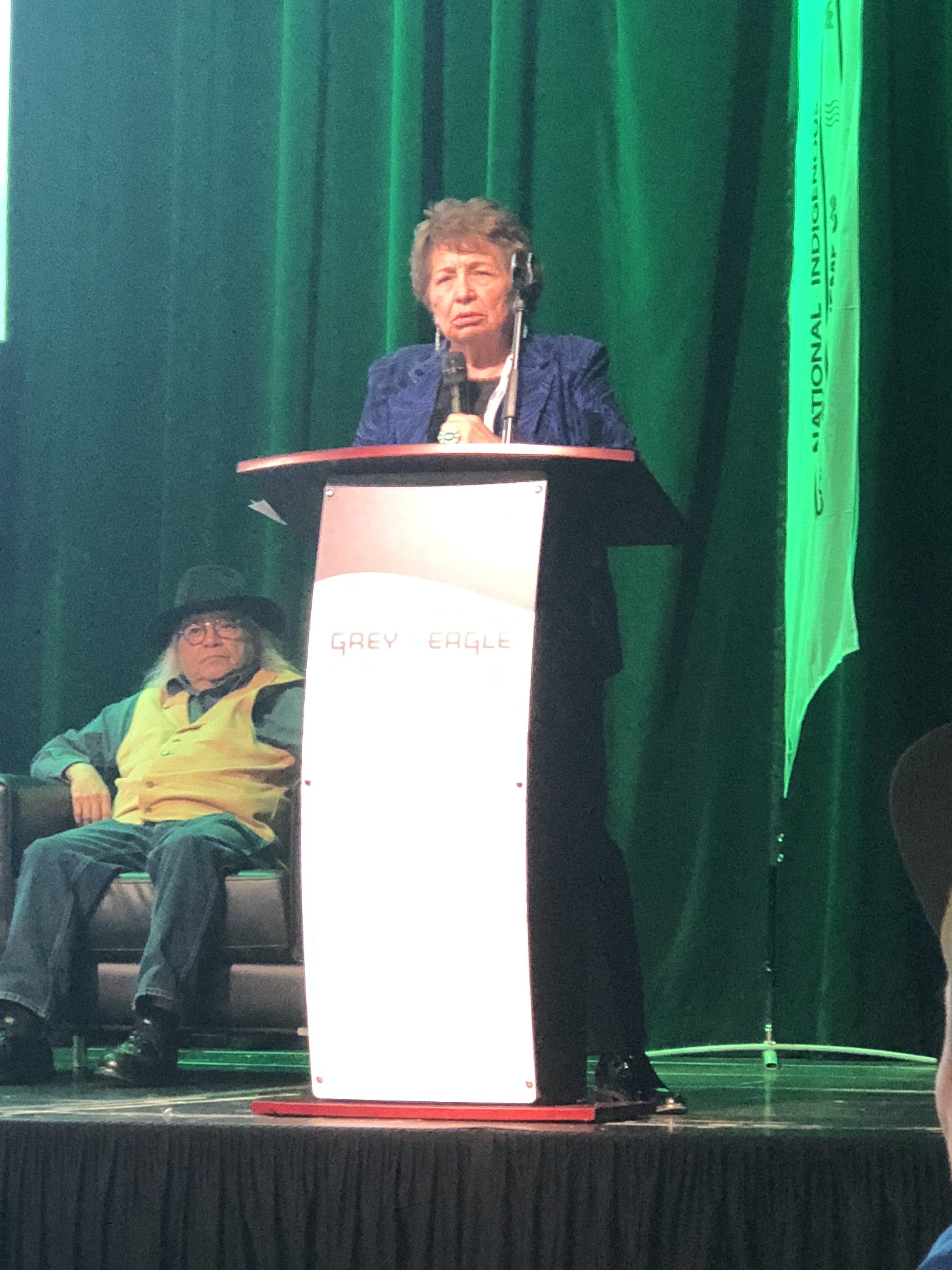 Regena Crowchild on Cannabis and the Treaty Relationship

Regena Crowchild has been a long time councilor for the Tsuut’ina Nation. She gave the following speech at the National Indigenous Cannabis and Hemp Conference, held on Tsuut’ina Territory, on Nov 19th, 2018.

When our peoples entered into Treaty, they had a right to self-determination. They had exclusive jurisdiction in all areas for their peoples and their territories.

The settler people came and they wanted to make Treaty with us. If you look at the Royal Proclamation, the Crown of the day said “You are not to make deals with the Indians on their lands without going through the Crown and you need their consent.”

They came from the East. Ontario wasn’t ready to enter into treaties, so they went to Manitoba and that’s where Treaty 1 started. Then Treaty 2, then back to Treaty 3 in Ontario, and then they moved across Canada.  54% of the land mass of Canada is the territory of the Indigenous peoples who entered into Treaties 1 to 11.

Canada is not signatory to our Treaties, we have international treaties with the Imperial Crown. And as a result, Canada now sits in this 54% of the territories that are owed and that title is with Indigenous peoples.

There are over 52 different languages in this Treaty territory. We had our peoples, our territories, our languages, our right of self-determination, our own institutions of government, we had our own spirituality. When we entered into Treaty, we never gave up those rights. The Indian Act came into being in 1876, and Treaty 7 was entered into in 1877. The Indians of the day did not know that there was such a thing as the Indian Act.

In our treaties our peoples agreed to share our territories to the depth of the plow with the newcomers. That was all.

When you deal with cannabis, gaming and other areas, it’s all about our relationship with Canada. Canada is a state, and Canada is in our territories as a result of our treaties. We were supposed to live side by side without interference.

Since 1876 and the enactment of the Indian Act, Canada took away our right to self-determination. They continued to legislate over us and interfered in our lives. Canada destroyed our societies, our families, government, judicial system, our societies, our religion, and our spirituality.

When people think that the Indians are just here to come and grab or have handouts, or that Canada is supporting us, remember that everything we have received is pre-payment for the settler peoples using our territories. This was never taught in the education system. Canada totally failed in teaching her citizens the true history of our lands.

We have been battling with the Federal government all these years trying to protect our rights and our Treaty, and Canada has never done that. They say that they listen to us, but they continue with their own agenda.

This government that’s in power now came to our people and promised a whole bunch of things. They said they’re going to review the legislation that has impacted our lives. They’re going to pass the cannabis legalization so they can get the young people’s votes. They said there’s no other relationship that is more important than the one with the Indigenous people and they say that they wanted to correct the wrong.

Well yes, we’d have to say that they’ve made an attempt, but they’ve yet to come and speak with the Treaty people who hold title to our territories and hold the power and the right to self-determination.

Instead, they go to organizations. They set up commissions. They delegate these commissions to go out and do things. And our peoples follow. The reason for that is because after the Indian Act, the residential school system came in, the infested blanket came in and tried to kill our people, the 60s scoop came where our babies were taken from their mothers. All of this is genocide.

We weren’t allowed to speak our own language in the residential schools – I went to residential school for nine years – as they tried to take the Indian out of the child. So our people didn’t know who they were, what their history is, what their relationship is with Canada, what the Treaty is all about.

The day has come now that we have to assert our jurisdiction, assert our nationhood. Canada is not a nation. They don’t hold title to our territories. They speak the English or the French language. A nation is supposed have its own language, and to possess historic continuity on its territory. They don’t have that. They brought in people, immigrants came to Canada. Those are their people. Our people were born here.

I have been battling this for over 50 years, since I was very young. It is time that our people wake up and understand who they are, what their histories are and what their authority is. So our people don’t have to suffer and manage poverty for our peoples.

Many of us today have good jobs. The government hires our people to move their agenda. They get good money. What about the people out there, living on the streets, who have title to this territory? When are they going to benefit from those treaties? Those are the questions I want you to ask yourselves.

We possess historic continuity in our territories. And it was in the right of our self-determination that our peoples, our forefathers entered into Treaty with the Imperial Crown which is an international Treaty that Canada is not a signatory to.

Every government has the right to tax. We have our own government, we can tax. But in our Treaty we are tax exempt because one nation cannot tax another nation and that’s international law. So the Imperial Crown did not tax us because this is our lands and our territories. In fact we should be taxing Canada for the use of our territories.

Because of the residential schools, and all the destruction that the Federal government did to our societies, our law making authority and our right to self-determination, I don’t blame our peoples for not knowing who they are and what their history is. But the time has come. We can learn now and we can move forward. We have to think of our future generations, not just us here today. We cannot be selfish. In our treaties it says they’re supposed to be there for as long as the sun shines, the grass grows, and the rivers flow.

When Chief Bullhead entered into Treaty, and I can assure you from what we know, he was reluctant to do so because he knew they were telling lies. But he said this, “I’m retaining this portion of my territory for the exclusive use of my peoples, today and in the future.” So that’s a part of our responsibility, to always make sure that there’s a home for Tsuut’inas. Just the same way as for the Blackfoot and all the other nations. That’s a big responsibility we have.

Those of us today that have good paying jobs will be ok. But what’s going to happen to our future generations? Are they going to be paying taxes to the Federal government for their own territory?

We need to know what we are. We need to stop asking Canada for approval. We issue our own licenses on economic development because our inherent right to economic development is protected by Treaty. You look across this country – we have treaties, international treaties, pre-confederation treaties, domestic treaties, and we have some Indigenous nations that don’t have any treaties. But one thing we have in common is that we are nations and this land belongs to us, unless we agree to cede and surrender it to the state of Canada, which our peoples have never agreed to.

Canada has a constitution. Section 91(24) was supposed to guarantee that there was Indians and land reserved for Indians for as long as the sun shines and the grass grows, not for the Federal Government to do away with our right to self-determination. Section 35 of the Constitution Act of 1982 recognizes and affirms Aboriginal and Treaty rights. And when we talk about Aboriginal rights we’re talking about our inherent rights. Those are their laws. Those are to remind them of the rights and obligations they have in living in our territories.

I’m so happy to see some of our youth here, because they need to know. We have to quit being colonized. We have the authority, all we have to say is no to the government of Canada.

What can they do without our consent? They adopted the UN Declaration on the Rights of Indigenous People, without qualification. And there’s right of self-determination in there. So why are they still legislating and trying to control us through their legislative processes when we have that authority?

I was taught by my parents and by the elders. I travelled from the southern portion of this province to the northern portion meeting with elders and they all told me the same thing. And they all say the same thing, but they depend on us to take action to protect our future generations. Don’t sit and wait for Canada to say yes to you, you have the authority.

Tsuut’ina is developing our own legislation on cannabis, and we’re going to regulate it. If we want to harvest it, if we want to sell it, that’s within our rights. It’s up to us as to how we want to deal with it. The non-Indigenous peoples have taken advantage of our peoples in so many ways. We need an honest relationship, a relationship that is going to benefit all parties and not just one side.

Someone asked why did they forget the Indians when they were developing this legislation? They didn’t care, they just assumed the Provinces will have jurisdiction over us to regulate it. I hate to say this, but Justin Trudeau has never fulfilled his promise to us Treaty peoples. He has yet to talk to us Treaty peoples. He’d prefer to go to organizations who we have not given our consent to discuss our treaties relationship with.

We have the authority and we need to assert our authority in our jurisdiction. Our children, and our children yet unborn will be happy and they’ll always have a place to call home, and they won’t have to live in poverty.