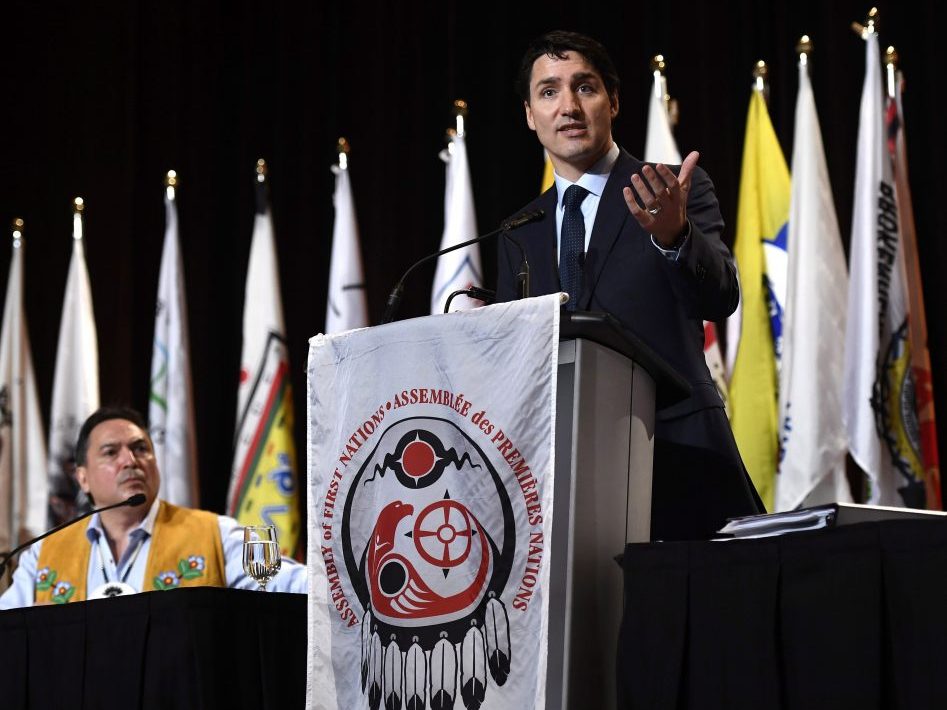 From Toronto Sun link to article by Mark Bonokoski, May 3, 2018

Our prime minister talks a good game but is lousy at playing it.

When it comes to our First Nations, Justin Trudeau projects a blood-brother relationship with our country’s indigenous communities, complete with an appropriated Haida tattoo, stresses the need for reconciliation to deal with the wounds of intergenerational trauma and abuse, but falls woefully short of doing anything substantive to lessen poverty and substance addictions.

Instead, he gifts them the old U.S. embassy building and rips a nameplate off the Langevin Building that houses the PMO because of its namesake’s connection to the residential school fiasco.

This is as token as the exchange of beads for land.

The other day, the Senate’s aboriginal affairs committee asked for Trudeau’s head-long rush to legalize the recreational use of marijuana be delayed for at least a year for one prime reason.

The Trudeau Liberals, big on aboriginal optics, had failed to consult indigenous communities regarding their concerns with legalization.

Actual consultation with First Nations doesn’t seem to have been a priority.

The committee denounced this failure as “atrocious,” and urged the Liberals to properly negotiate indigenous tax sharing when it comes to pot, to prepare culturally-appropriate educational materials, design addiction strategies, and allow First Nations themselves to decide whether they want marijuana to be legal on their reserves.

This was not what Trudeau likes to call “working together.”

On Thursday, Trudeau continued to vow recreational marijuana would be legalized by year’s end, that it was “not an event but a process.”

He said he was pushing forward to keep marijuana out of the hands of kids, that it was a “public health and public safety issue.”

He said the sale of marijuana in Canada today is a $6-billion motherlode for criminals and organized crime, and it was time to cut them out of the picture.

As written here Wednesday, there are already 26 illegal pot dispensaries (some raking in $10,000 a day), and 31 smoke shacks selling cheap Native cigarettes by the truckload, on the relatively small Mohawk reserve of Tyendinaga, halfway between Montreal and Toronto, that are obviously having their cannabis and cannabis edibles supplied by organized crime.

There is no other supplier.

With price-point often the determining factor, it’s a sure bet that on-reserve pot shops will underprice the provincially-sanctioned pot outlets and will not be collecting taxes on behalf of a government that talks a good game but has ignored their needs for generations.

Government will get the same middle finger when it comes to marijuana sales as it does with Native-manufactured cigarettes.

As for provincial police or the RCMP moving into reserves to enforce provincial or federal law, this too will never happen.

After Oka, Ipperwash, Caledonia and other violent First Nation confrontations, reserves will continue to be what they are today — no-go zones for outside law enforcement.

Justin Trudeau obviously thought none of this through when he decided to be the big dealer on campus, and push for the quick legalization of marijuana, despite it having more moving parts and more heads than a hydra.

He took former Toronto Police Chief Bill Blair, who once had 5,400 cops under his command sniffing out the whiff of marijuana in the air and made him the parliamentary secretary overseeing marijuana’s legalization.

Blair could not look more hypocritical, or Trudeau more naïve.

Earlier this week, First Nations chiefs passed a resolution regarding marijuana that demanded federal and provincial governments recognize and respect First Nations sovereignty and jurisdiction over their reserves and traditional territories.

This was not a suggestion.

This was a warning.

Published in News, Reprint and Tyendinaga