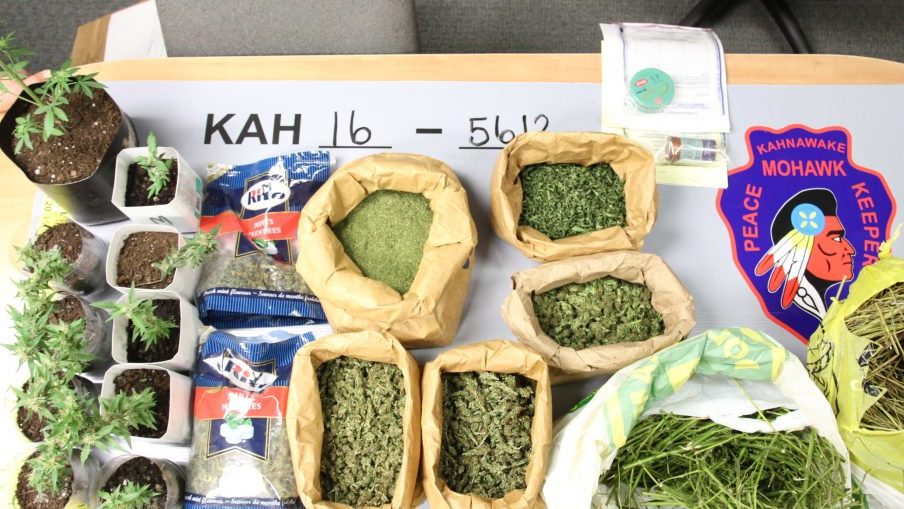 In the span of a week, Peacekeepers seized a mass amount of suspected marijuana and a Chateauguay man and four others were busted on drug charges.

According to a PK report, Chateauguay Police contacted investigator Jimmy Jacco at the PKs on September 14 after a person called the station about a possible marijuana grow op near the boundary of Chateauguay and Kahnawake, that was being accessed via the community.

On several occasions PKs and police went to the area, and on September 19 officers found a field with what appeared to be harvested marijuana plants.

On September 29 the same informant called the station after spotting a man on a red ATV with a black helmet, jumpsuit and safety vest heading into the area where the fields were. Officers went to the area, but were unable to locate the person.

At around 10 a.m. officer John Dee Delormier went to the entrance of the bush and waited. At 11:10 a.m. Delormier saw the ATV come out of the bushes, and he attempted to intercept the driver.

The ATV turned abruptly onto a trail and Delormier followed, first in his vehicle, and then on foot. At 11:43 a.m. Delormier located the ATV and relayed the plate to the station that came up with a residence in Chateauguay. Officer Watio Diabo assisted and located the keys.

Officer Nikki Lahache and PK chief Dwayne Zacharie accompanied Chateauguay officers to the residence and noticed a male getting into a vehicle and leaving. He was intercepted and as officers approached they noticed suspected marijuana in plain view. He told them he did not have identification as it was left with the ATV.

He was brought to the station, and officers found 3.96 kilograms of buds, leaves, stocks, and ground dried cannabis, along with 10 plants, a small tin of seeds and four pills.

After obtaining a search warrant, officers found a cleared out growing operation in the man’s house, and throughout the investigation estimated that PKs have found over 300 marijuana plants.

The operation was a testament to police cooperation, according to the PKs.

“It’s pretty awesome,” said assistant PK chief Jody Diabo. “It’s working together because they gave us the information, we ran with it and look at the result.”

D’Amor was remanded over the weekend and appeared in Valleyfield court Monday. He was released Tuesday on conditions.

Diabo confirmed that no Kahnawake residents were picked up or suspected of working with D’Amor in the operation.

Tuesday night just after 8 p.m., a local female working at a convenience store called the PKs reporting a black man with dreadlocks at Turn 4 Resto & Sports Bar selling drugs. The PKs’ Team B affected to the call an identified three men and one woman at a table and asked them for identification.

One man matched the description given and was a Chateauguay resident found to be in breach of probation.

All four were asked to leave the establishment and officers noticed a bag of marijuana under the chair the local male was sitting in. PKs seized 30 grams of suspected marijuana and a small amount of suspected cocaine.

All were brought to the station and released on a promise to appear in court. Charges are pending for possession of a controlled substance for all four, and one charge on breach of probation for the Chateauguay resident.