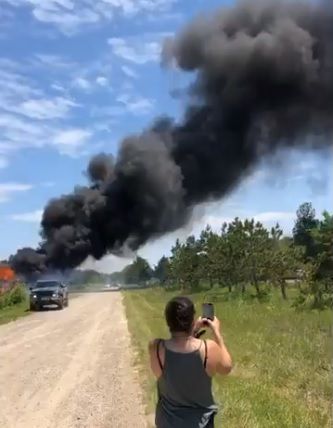 Clashes raise thorny question: How (or if) to regulate First Nations pot shops

Separate disputes over illegal pot shops near Southwestern Ontario Indigenous communities weeks apart highlight the complexities surrounding how First Nations cannabis stores ought to be regulated, if at all.

Then on June 19, a tense situation ignited at Ipperwash Provincial Park, resulting in one illegal pot shop being burned down, another damaged, and at least one person arrested.

Sgt. Murray Bressette, with Anishinabek police in Kettle and Stony Point, said the incidents in Ipperwash and Middlesex Centre are unrelated.

He described the Ipperwash situation as an “internal issue between members of Kettle and Stony Point” and said mediation is ongoing.

While the events are entirely unrelated, they underscore a potentially simmering issue of marijuana regulation in Indigenous communities, and the complexities and confusions tied to the nuanced subject.

“The best solution is for the band council to license this thing like they do everything else and make people pay tax and negotiate with the government what they’re looking for,” said Bressette. “Stop wasting taxpayer money on making police shut down something illegal.”

Many unregulated pot shops have been a mainstay on reserves and settlements for years and have gone widely uncontested by provincial police.

Bressette said their presence should be no surprise, with many community members looking to pot and smoke shops as a means to get by.

“There’s a demand for employment opportunities, and it’s been demonstrated by those that have tried everything to find a job and feed their family, and they can’t do it,” he said. “There’s no other income, so what are they going to do?”

He said it’s difficult for people on reserves to break the cycle of systemic poverty.

“That’s what it’s like to be Anishinaabe,” he said. “It’s to be brought up in a lesser class and know you aren’t getting anywhere else.”

But Bressette said the people who keep these shops in business are outsiders, drawn to Indigenous communities by lower prices. “They’re supporting illegal stuff.”

When the COVID-19 pandemic hit, many reserves barred outsiders as a public health measure, effectively cutting off business at the same time.

In the province, cannabis retail operation licences and store authorizations are regulated and issued by the Alcohol and Gaming Commission of Ontario (AGCO). Applications for an on-reserve cannabis retail store require a band council resolution approving the proposed location.

“This will help prevent the further proliferation of illegal storefronts in First Nations, particularly within communities . . . interested in operating under the regulated framework on reserve,” said the ministry’s Brian Gray.

“The government will continue to engage with First Nations interested in developing their own approaches to cannabis to identify how the government can best support efforts by these communities,” Gray said.

Indigenous communities were not consulted when cannabis legalization was unfolding.

He said the first step to ironing out the “huge jurisdictional grey zone” is better communication.

“It’s confusion among sovereignty and the boundaries of sovereignty and how that interplays with vague languages of treaties,” Taylor said. “There are long histories with colonization and prevalence of substance use, so it’s a difficult subject to talk about.”

Taylor said local chiefs and councils might oppose current unregulated or illegal pot shops on their territory yo avoid any possible criminal liability.

One solution could be for Indigenous communities to use the upcoming farm-gate clause, which will allow cannabis cultivators to have on-site stores.

“Go down the Health Canada path . . . and sell directly from Health Canada cultivation, kind of making everyone happy in that scenario,” Taylor said. “First Nations don’t have to be in any way regulated by Ontario, and then can fruitfully participate in this industry.”

But current costs of meeting Health Canada cultivation standards would price out most Indigenous communities, he added. “It’s very hard for a small First Nations government to even dream of taking on.”

It’s these factors that combine to make the matter even more complex. But if there is one thing most parties seem to agree on, it’s that a one-size-fits-all approach won’t work.

“In every part of Canada, you’ve got the hodgepodge of it all,” Taylor said. “We’re all First Nations, but everyone is doing their own thing in many different programming areas. There are huge different stances.”