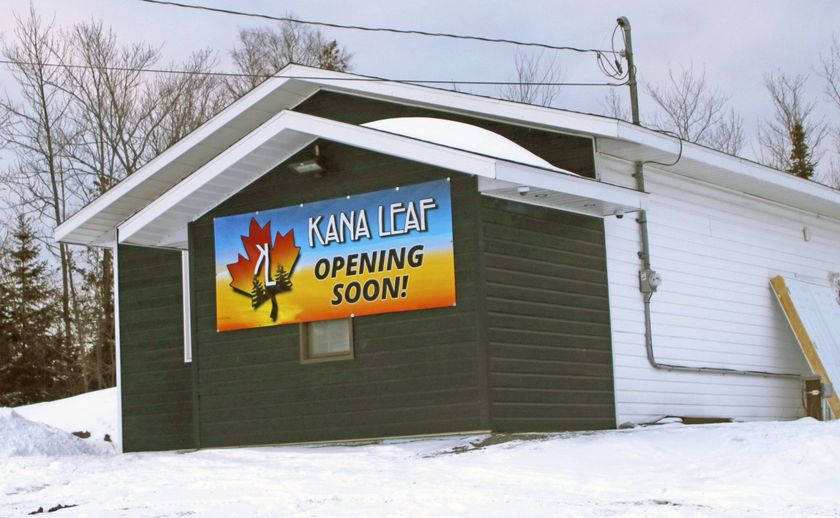 From nugget.ca link to article by Michael Lee, Feb 17th 2020

Nipissing First Nation — and the North Bay area — could see its first licensed cannabis dispensary open by the end of the month.

Kana Leaf has announced it is scheduled to open Feb. 29 on Osprey Miikan, just off Highway 17 in Nipissing First Nation.

Co-owner Garet Avery says the business just had an inspection done by the Alcohol and Gaming Commission of Ontario (AGCO) and is waiting for the paperwork to be filed.

As of the end of Friday, Kana Leaf’s cannabis retail store application was still listed as being in progress.

But after about a year in the making, Avery says it he feels relieved to have the store open soon.

“We will be the first one in the area and that’s pretty exciting in itself, because people get to see what we’re about and they get to choose,” Avery said in a phone interview with The Nugget.

One other cannabis store on Nipissing First Nation, Northern Zen Cannabis, also is moving through the approval process, as is a Tokyo Smoke outlet planned for North Bay that was brought forward by a Toronto lawyer.

Avery is currently in business with a few family members. He says all are Nipissing First Nation members.

In total, six applicants from Nipissing First Nation were invited to apply to operate a store.

Avery says he wanted to get into the industry because he believes it is an exciting and different opportunity for him, his family and the community.

Kana Leaf is expected to have all of the “top flowers” out there now, Avery says, as well as CBD oils and accessories.

But he also views the business as a chance to better serve the community.

“For myself, I was looking at it and I was seeing other First Nations and seeing how they were operating. It was not legitimate and you never know where it’s coming from,” Avery said.

“So we kind of wanted to be the first ones to actually give legal cannabis that’s health and safety inspected, that’s not illegal.”

Nipissing First Nation passed its own Cannabis Law last year which sets the legal age to purchase cannabis at 21.

Chief Scott McLeod also has spoken about his concerns around having a safe and legal supply of cannabis, something Avery says he wants, as well.

It’s why, he says, they chose to go through the Ontario system and “get the ball rolling” in order to have a framework that First Nations can follow.

And while he may not have the same type of money behind him as some of the larger cannabis companies, Avery says he believes what will separate them from everyone else is the hands-on knowledge of the staff and the customer experience.

“We really want to try to educate people too,” Avery says, “because there’s such a stigma against it still to this day.”

In December, the provincial government announced it would remove the limit on the total number of cannabis stores allowed in the province as part of a broader move to expand the retail market.

The current 93-store cap will be lifted March 2, at which point the AGCO will begin accepting applications for retail store authorizations from those interested.

The province also disbanded its previous lottery system, as well as the process governing First Nations’ applications, last month and has begun accepting applications from anyone wanting to obtain a retail operator licence.