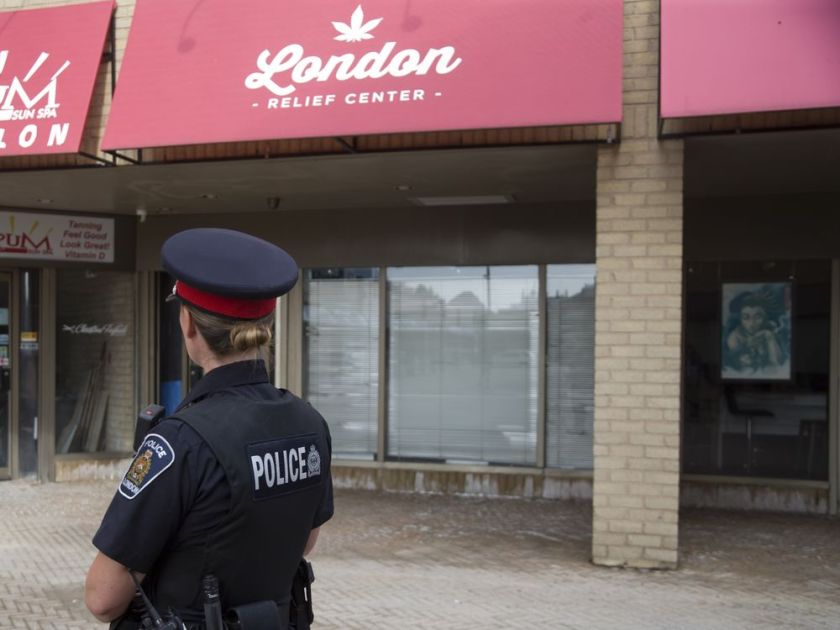 Rules are rules, the judge said.

Ontario Court Justice Mark Poland said illegal marijuana dispensaries that flouted new marijuana retail laws in 2018 were akin to someone selling booze on their own just because they don’t want to go to the LCBO.

Just because you might not like the rules, “you can’t simply fire up a still and sell from your garage,” Poland said when assessing the cases against 28 people described as retail clerks at illegal London marijuana dispensaries.

All 28 pleaded guilty in the fall under the Cannabis Act to possession of cannabis for the purpose of selling it.

What makes the crimes serious, he said, is that those who worked in the illegal storefronts — including the London Relief Centre on Richmond Street and Healing Health on Wonderland Road — knew the law had changed regarding the sale of marijuana when it was decriminalized on Oct. 17, 2018.

At the time the stores were raided by police, the new provincial retail laws stipulated adults could buy small quantities of recreational marijuana only from a government-run mail delivery service.

The raid caused a stir among local marijuana advocates. The dispensaries had held themselves out to be helping those with medical marijuana prescriptions.

But since the raids, the smoke has cleared surrounding marijuana laws and it appears all the clerks may be walking out of court with discharges that could allow them to carry on without criminal records.

At Wednesday’s lengthy court hearing, 10 of the 28 were given conditional discharges with 12 months of probation, orders to complete 50 hours of community service and mandatory 10-year weapons prohibitions.

One clerk, an Indigenous woman, was granted an absolute discharge after Poland applied Gladue principles, a sentencing regime for First Nations people.

Her sentencing and that of another woman were argued by Toronto cannabis defence lawyer Jack Lloyd and federal drug prosecutor Trevor Pellerine. Lloyd sought absolute discharges for both women. Pellerine advocated for suspended sentences with 12 months of probation.

Lloyd said the women are interested in pursuing medical marijuana sales and one of them wants to enroll in a new cannabis applied science program. Both have strong ties to family and friends

Each was asked if they had anything to say to Poland before they were sentenced. “Not at the moment,” said the Indigenous woman, her voice breaking.

The other woman was in tears before she was discharged. “Ultimately what I really want to do is leave this world a better place than I found it,” she told Poland.

Those two cases set the bar for the rest. Poland said in his decisions that given neither woman had criminal records and both were involved in their communities, discharges were the best options.

After that, Lloyd and Pellerine came together on joint sentencing positions of similar conditional discharges. The court finished as many cases as it could before the day ended.

All those who were dealt with Wednesday were charged after London police raided the London Relief Centre on Nov. 29, 2018. The facts of the cases were told to Poland during the guilty pleas in the fall.

Police then raided both the London Relief Centre and Healing Health on Nov. 29, 2018.

The Relief Centre, Poland noted, was searched shortly after 11 a.m. where there was a large group of staff in the establishment and lots of drugs on sale. The total value of the marijuana bud, cannabis resin, shatter, hash and shake seized that day was $78,273. Also seized was $5,273 in cash.

Poland said the store, while operated under the guise of a medical dispensary, “was selling to customers who effectively came in from the street” and was “not restricted to dispensing of marijuana to persons with medical prescriptions.” Sales staff made no effort to verify whether the drug was being purchased for a prescription, he said, and no licence had been issued by Health Canada.

But Poland pointed out the retail workers were not the owners of the businesses.

The other 17 people who have pleaded guilty are slated to return Feb. 24.