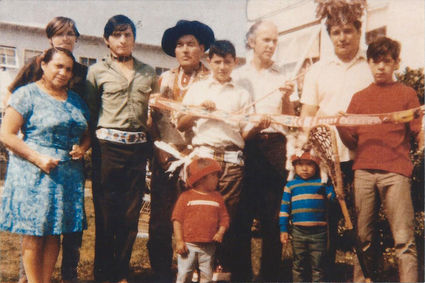 On the Art of Stealing Human Rights

Extracts from a speech given by Gerry Gambill at a conference on Human Rights at Tobique Reserve in New Brunswick, in August, 1958. In this speech he warned native people about how society goes about taking away the Human Rights of native people.

The art of denying Indians their human rights has been refined to a science. The following list of commonly used techniques will be helpful in ” burglar- proofing” your reserves, and your rights.

GAIN THE INDIANS CO-OPERATION- it is easier to steal someone’s human rights
if you can do it with his OWN co-operation. So…

1. Make him a non-person. Human rights are for people. Convince Indians their ancestors were savages, that they were pagan, that Indians were drunkards. Make them wards of the government. Make a legal distinction, as in the Indian Act, between Indians and persons. Write history books that tell half the story.

2. Convince the Indian that he should be patient, that these things take time. Tell him that we are making progress, and that progress takes time.

3. Make him believe that things are being done for his own good. Tell him you’re sure that after he has experienced your laws and actions that he will realize how good they have been. Tell the Indian he has to take a little of the bad in order to enjoy the benefits you are conferring on him.

4. Get some people to do the dirty work. There are always those who will act for you to the disadvantage of their own people. Just give them a little honor and praise. This is generally the function of band council, chiefs, and advisory councils: they have little legal power, but can handle the tough decisions such as welfare, allocation of housing etc.

5. Consult the Indian, but do not act on the basis of what you hear. Tell the Indian he has a voice and go through the motions of listening. Then interpret what you have heard to suit your own needs

6. Insist that the Indian “GOES THROUGH THE PROPER CHANNELS.” make the channels and the procedures so difficult that he won’t bother to do anything. When he discovers what the proper channels are and becomes proficient at the procedures, change them.

7. Make the Indian believe you are working for him, putting in much overtime and at a great sacrifice, and imply that he should be appreciative. This is the ultimate in skills in stealing human rights; when you obtain the thanks of the victim.

8. Allow a few individuals to “MAKE THE GRADE” and point to them as examples. Say that the ‘HARDWORKERS” AND THE “GOOD” Indians have made it, and that therefore it is a person’s own fault if he doesn’t succeed.

9. Appeal to the Indian’s sense of fairness, and tell him that even though things are pretty bad it is not right for him to make strong protests. Keep the argument going on his form of protest and avoid talking about the real issue. Refuse to deal with him while he is protesting. Take all the fire out of his efforts

10. Encourage the Indian to take his case to court. This is very expensive, takes lots of time and energy and is very safe because laws are stacked up against him. The courts ruling will defeat the Indians cause, but makes him think he has obtained justice.

11. Make the Indian believe that things could be worse, and that instead of complaining about the loss of human rights, to be grateful for the rights we to have. In fact, convince him that to attempt to regain a right he has lost is likely to jeopardize the rights that he still has.

12. Set yourself up as the protector of the Indian’s human rights, and then you could choose to act only on those violations you wish to act upon. By getting successful on a few minor violations of human rights, you can point to these as examples of your devotion to his cause. The burglar who is also the doorman is the perfect combination.

13. Pretend that the reason for the loss of human rights is for some other reason, other than the person is Indian. Tell him some of your best friends are Indians, and that his loss of rights is because of his housekeeping, his drinking, his clothing.

14. Make the situation more complicated than is necessary. Tell the Indian you will have to take a survey to find out how many other Indians are being discriminated against. Hire a group of professors to make a year-long research project.

15. Insist on unanimity. Let the Indian know that when all the Indians in Canada can make up there minds about just what they want as a group, then you will act. Play one group’s special situation against another group’s wishes.

16. Select very limited alternatives, neither of which has much merit, and then tell the Indian that indeed he has a choice. Ask, for instance, if he could or would rather have council elections in June or December, instead of asking if he wants them at all.

17. Convince the Indian that the leaders who are the most beneficial and powerful are dangerous and not to be trusted. Or simply lock them up on some charge like driving with no lights. Or refuse to listen to the real leaders and spent much time with the weak ones. Keep the people split from their leaders by sowing rumor. Attempt to get the best leaders into high paying jobs where they have to keep quiet to keep their pay check coming in.

18. Speak of the common good. Tell the Indian that you can’t consider yourselves when there is a whole nation to think of. Tell him he can’t think only of himself. For instance, in regard to hunting rights, tell him we have to think of all the hunters, or the sporting good industry.

19. Remove rights so gradually that the people don’t realize what has happened until it is too late. Again in regards to hunting rights, first restrict the geographical area where hunting is permitted, then cut the season to certain times of the year, then cut the limits down gradually, then insist on licensing, and then Indians will be on the same grounds as the white sportsmen.

20. Rely on some reason and logic (your reason and logic) instead of rightness and morality. Give thousands of reasons for things, but to not get trapped into arguments about what is right.

21. Hold a conference on Human Rights, have everyone blow of steam and tension, and go home feeling things are well at hand.