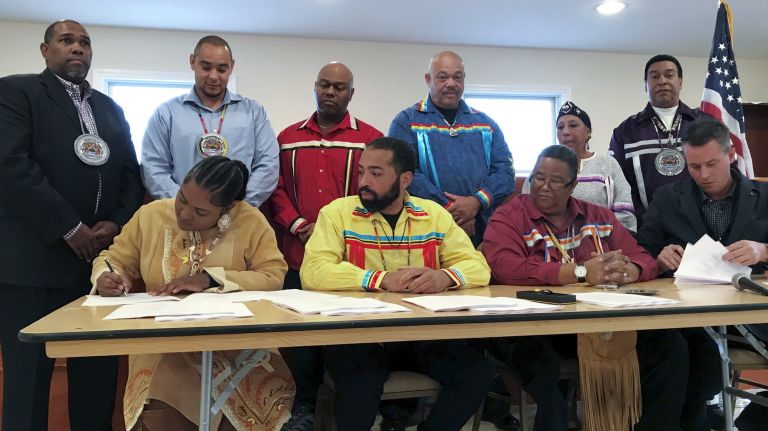 from newsday.com link to article by Mark Harrington, November 20, 2019

The Shinnecock Indian Nation on Wednesday signed a partnership agreement to build and operate a medical marijuana dispensary on the Southampton reservation within a year in the latest initiative to broaden the federally recognized tribe’s economic opportunities.

Tribal leaders and the tribe’s business partner and investor, Conor Green Consulting, broke ground on the dispensary on Montauk Highway shortly after a signing ceremony at the nation’s administrative headquarters on the 800-acre reservation.

Bryan Polite, chairman of the tribal trustees, said the tribe expects the facility to produce “very significant” revenue for the nation once it opens next year.

The 3,600-square-foot facility, which will be located beside the tribe’s existing array of smoke shops and food stores on Montauk Highway in Southampton, will offer a range of holistic products and treatments, including acupuncture and approved holistic medicines, tribal leaders said.

The tribe has been working with the state Department of Health so that it can operate within the state system of card-carrying patients permitted to buy medical marijuana. It is seeking a memorandum of understanding with the state to participate in the system. The nearest state-licensed dispensary operates in Riverhead.

The tribe, which expects to eventually launch a cultivation operation in the future, plans to launch the facility by purchasing cannabis from an existing producer already licensed by the state.

“We want to be part of the state system,” said Polite, noting that plans for the tribal facility reviewed by the state met or exceeded state standards. “We would only be servicing licensed patients under the New York State system.”

Leaders said the facility is “one slice of the pie” of greater economic opportunities to broaden job prospects for members and improve the tribe’s overall financial health, which comes chiefly from an annual pow wow on the reservation.

While it has been stymied in attempts over the past decade to open a casino on Long Island, it has recently passed initiatives that could pave the way for a partnership with the Seminole Tribe of Florida for a Hard Rock Hotel facility in New York State, if approved. The tribe earlier this year erected a monument/billboard on Sunrise Highway to generate advertising revenue, and it plans for up to two tribal gas station/rest stops nearby next year.

“This is just another step in the mission,” said Lance Gumbs, a tribal trustee and smokeshop owner.

The tribe in 2016 passed resolutions that began the process for a medical marijuana dispensary and cultivation operation. It has been meeting with state officials, including Attorney General Letitia James, in an attempt to move a broad array of economic initiatives forward and to head off state litigation that can slow the projects, he said.

Dondi Williams Jr., sachem of the Shinnecock Nation, said initiatives like the medical marijuana dispensary are crucial for the tribe, and not just for current members.

“It’s important for our generation to get it done so it’s ready for the next generation,” said Williams, who with other tribal leaders signed the agreement. “That’s one of my visions.”